Anonymous does not mean you are doing illegal stuff

Anonymous does not mean you are doing illegal stuff

New Delhi: Internet activist group Anonymous, which has been attacking Indian websites, has further planned such attacks from 9 June to protest censorship of content in the country. It has also demanded the unblocking of file-sharing websites in India. The government says it’s prepared to deal with the online attacks and protests, besides seeking to arrest the members of the self-proclaimed collective. In a group interview, some members of Anonymous India spoke about the protest and how they work. The interview took place over web chat and involved multiple members of the group, all of whom maintained their anonymity. The collective is planning physical, non-violent protests across Indian cities on 9 June. Edited excerpts:

What are your plans for 9 June?

Be a physical, visible presence. Make it clear that we oppose this censorship and we want our Internet back. 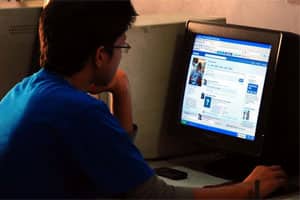 The administrators of respective FB (Facebook) groups, many of them are working on that already. People volunteer. Anonymous does not mean you are doing illegal stuff....We have lots of support from people in the IT (information technology) industry and students. A few offered to get (permission).

File-sharing websites have been blocked in India in the past as well. What was the trigger for your attack this time?

Blocking of many sites at the beginning of this month. Censorship was the trigger, but more than that, arbitrary, unjust measures. To block access to millions, because there could be illegal content is not acceptable. Also, people should have the right to decide what is moral to them and what is immoral.

Are more attacks on websites in the offing?

Yes. Defacing and leaks are also in progress. 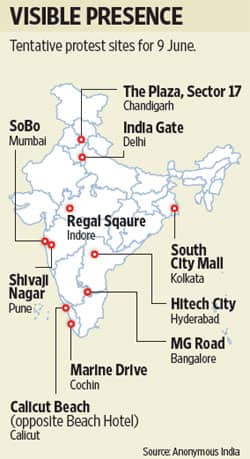 The government has created laws and support for censorship that are getting used. Who will monitor? Whose responsibility is it to protect rights of people? Why create methods of censorship you can’t control? Today, we have the IT rules, where intermediaries have to take down content based on notifications. How can this be monitored? Who knows what gets taken down to avoid hassles? It is the government’s responsibility to make wise laws.

How do you operate? How do you choose which issues to take up?

By voting. Usually someone brings up an idea, creates the channel, gives information and invites and advertises. For example, Mamata Banerjee imprisoned cartoonists: vote goes up (for a situation like this), and accordingly, we take action.

How do you recruit members to your group?

It is not a group. It is an idea. If you think like us, you already are part of us.

Since everybody’s identity is anonymous, how do you sift between fake and genuine?

If you are fake, you will be exposed. We don’t monitor. We just communicate, on Twitter or just through this IRC (Internet relay chat) network.

How do members manage time for such coordinated attacks, considering all of you have day jobs?

Yes, some of us have jobs. We come online whenever we can. No more personal questions.

The government is trying to track members of Anonymous and claims to be close.

Good luck. They have been (doing so) from the start. There are too many of us. They will not be able to get us all. The ones who are captured are the ones who make mistakes.

Are you saying it won’t matter if they get through to some of you?

We never know the identity of another, so even if one gets caught, all they get are usernames. No, it won’t matter.

So you guys are not scared of police action?

We are. As all are protesters. Some things are bigger than fears. But we have removed the idea of what would happen if we get caught.

Do you think this idea that drives you is bigger than the trouble that could follow?

Yes. It’s always been that way and always will be. It is worth it. Freedom is important, for us, and for the generations to come after us.

What is that one big idea that drives all of you?

Are attacks such as Operation India coordinated by the central unit of Anonymous?

No, all are decentralized. There is no centre, no head.

So you are independent?

Yes, but the target will be discussed usually, so a democratic system is in place. There is consensus, people who find it important walk together, each knowing the risk and owning it.

What if the websites are not unblocked even after the 9 June protests?

We fight again and again. It’s just phase one of the fight.

Will you attack more websites?

I’m sure many more websites will be attacked. We will keep hitting, with our canons loaded fully. Lots more data will be leaked.

The government says that you tried attacking many sites but were not successful. True?

Some have succeeded, some have not.

How does it all begin, suppose there is a country that still doesn’t have an Anonymous representative?

Who appoints the first member? Do you need permission from the centre?

No one appoints. There is no centre, we do not need permission, we can do whatever we like. Except for a few rules, we can do anything. Anonymous is like an idea. It spreads, it goes from one person to others!

Do you guys need any funding for what you do?

No. We do not spend any money for what we do.

How would you rate the success of your India operation so far?

So far, so good. The problem remains. The results are good, but this is the journey. Too early to evaluate. Well, we need more people to wake up and understand what is happening around them. We shall continue and try to get maximum support, and try to spread the idea of Anonymous.

Will some of you be there at the protest physically?

Maybe, maybe not. We are an idea, so we will be there. But I’m sure some will be (physically there), but if everyone has masks, they will all look the same.