Car sales slow in July on high base

Mumbai: Passenger car sales, which had a stellar run since January 2018 on the back of new launches and a recovery in rural demand, saw a slowdown in July because of a high base in the same month last year and a planned inventory reduction by auto makers ahead of the launch of new models and refreshes during the festive season beginning later this month.

A nationwide transporters’ strike in mid-July also impacted production and distribution of vehicles. Auto makers in India consider dispatches to dealerships as sales.

During July last year, inventory stocking was unusually high as consumers deferred purchases in the preceding months expecting a lower tax outgo post the implementation of the goods and service tax on 1 July.

The slowdown in sales this month is an aberration as underlying retail demand, primarily from semi-urban and rural areas, has remained stable as expected, analysts said.

“As auto makers look to fill inventory channels with new products for the festive season in August and September, they did not push inventory aggressively in July," said Darshini Kansara, deputy manager, industry research at CARE Ratings Ltd. 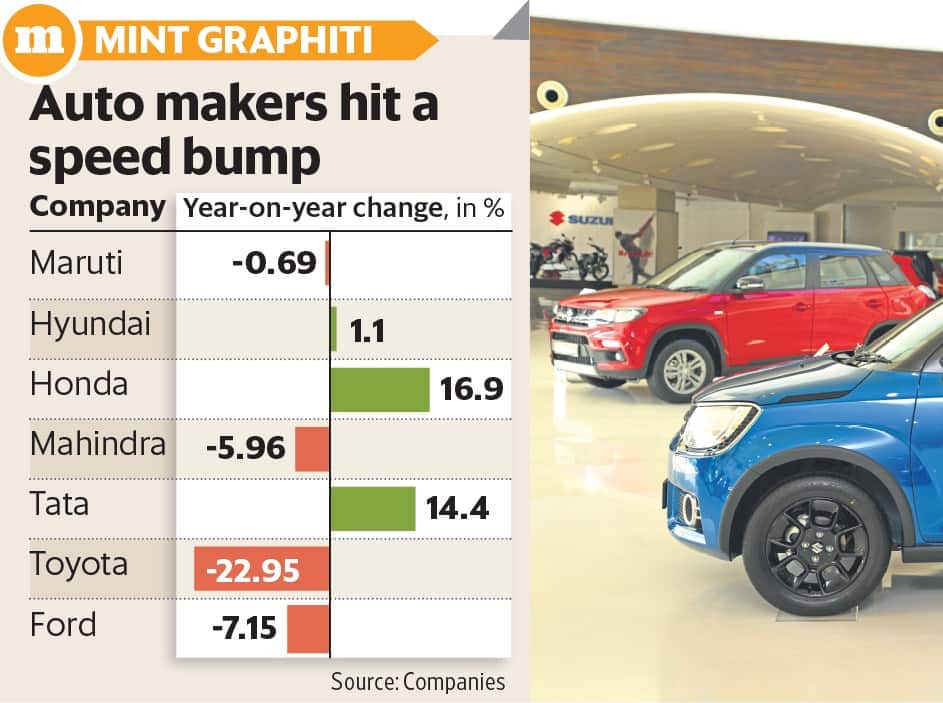 Passenger car market leader Maruti Suzuki reported a marginal fall in domestic car sales (excluding vans and commercial vehicles) to 136,636 units in July from 137,584 units a year ago, the first decline since December 2016.

Sales of the premium sedan of the local subsidiary of Suzuki Motor Corp. stood at 48 units in July as compared to 6,377 units a year ago. The company plans to introduce the next-gen Ciaz on 20 August.

Other segments also reported lower-than-expected sales. The compact car segment, which makes up the bulk of Maruti Suzuki sales, grew 17.8% to 74,373 units because of the demand for the 2018 Swift hatchback and continued interest in premium hatchback Baleno and compact sedan Dzire. In the past few months, this segment had been reporting growth upwards of 20%.

The sport utility vehicles (SUV) segment, including the best-selling Vitara Brezza and S-Cross models, posted a 4.9% decline to 24,5050 units over July last year.

Hyundai Motor India clocked 43,481 units in sales during July, an 1.1% growth over the year-ago period, on the back of refreshed models such as the Creta compact SUV, Verna sedan and Elite i20 hatchback, according to Y.K. Koo, managing director and chief executive at the local subsidiary of the South Korean carmaker.

“A positive growth trend is visible with the stabilisation of macroeconomic factors and a good monsoon, along with increase in customer confidence and sentiment towards new vehicle purchases," he said.

Honda Cars India clocked a 16.9% rise in sales to 19,970 units during July on the back of greater production of the Amaze compact sedan and sustained momentum for the City sedan and WR-V SUV, said Rajesh Goel, senior vice-president and director of sales and marketing at the firm.

The maker of the rugged Bolero SUV, Mahindra, posted an 5.96% decline in sales to 19,781 units during the month. Rajan Wadhera, president of the automotive sector at the firm cited “certain uncertainties with the truckers’ strike and sluggishness on the retail front" as challenges during the month. The firm is “confident of seeing a turnaround in the overall buying sentiment" as the festive season approaches, he said.

Analysts expect the quarters ending September and December to contribute handsomely to sales on the back of the festive season, a positive economic environment, stable inflation and interest rates, and expectations of a normal monsoon, though rising crude oil and commodity prices may play spoilsport.