The story of ‘need-based’ capital infusion

Between FY09 and FY15, all decisions to infuse capital into state-run banks seemed to be based on ad hoc considerations, varying from year to year

Over the years, the government of India has been infusing “need-based" capital in public sector banks (PSBs) to enable them to maintain capital adequacy (both Tier I and Tier II capital under Basel II norms) while meeting the credit growth expectations. The capital infusion has so far generally been through preferential allotment of equity shares by the banks to their majority owner—the government.

In the wake of the global meltdown, a high-level committee on capital requirement of financial institutions (consisting of the finance secretary as chairman, with secretaries from the departments of expenditure, economic affairs and financial services and the chief economic adviser as members) in September 2011 recommended the creation of a holding company for PSBs which could then raise necessary extra budgetary resources. In course of the first banking reforms conclave in January 2015, the issues of non-performing assets (NPAs) and capitalization of PSBs were discussed threadbare. Subsequently, in August that year, finance minister Arun Jaitley announced infusion of Rs70,000 crore of capital in PSBs over 2015-16 to 2018-19 under Indradhanush—a sevenfold agenda of banking reforms. 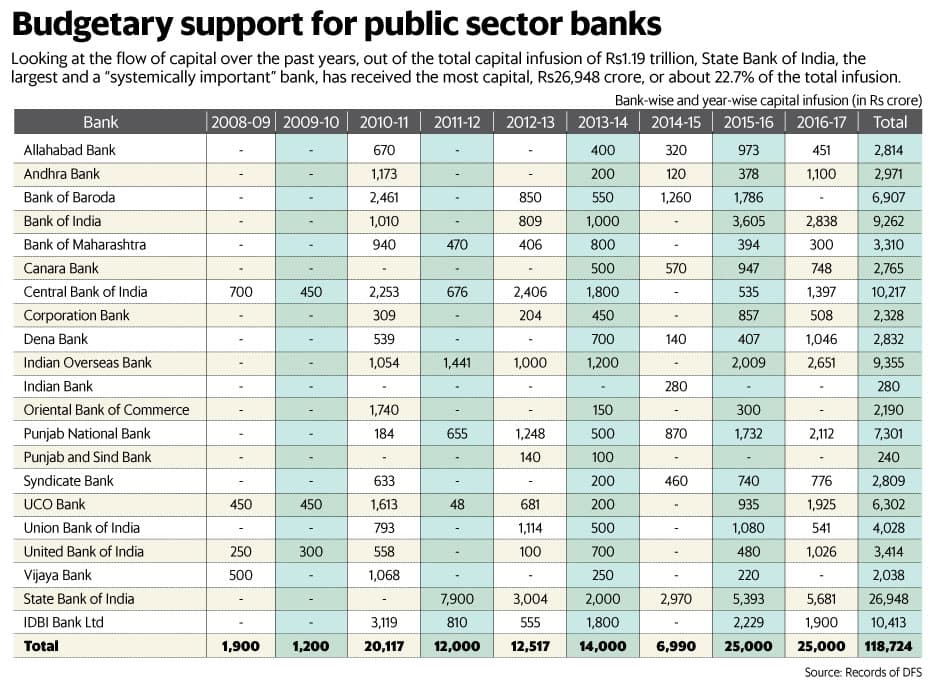 Recapitalization of PSBs: the process

The department of financial services (DFS) of the finance ministry is the administrative authority for PSBs. Every year, DFS reviews the performance of each PSB on the basis of a number of parameters. It has also been reviewing their capital requirements.

Taking into account the credit growth and risk profile of the assets, and assessment of internal accruals and other sources of capital generation, PSBs seek capital from the government. The DFS verifies and determines the capital requirement on a “need-based approach" in consultation with the finance ministry and recommends them to the cabinet committee on economic affairs (CCEA).

In the context of Basel II norms, the need-based approach needs to be understood in the broader perspective of helping the PSBs achieve minimum capital requirements (of both Tier I and Tier II) as per the regulatory framework, including maintaining 2.5% additional capital buffer, and planning and strategizing for future growth as well. Keeping in view the budgetary constraints, the cabinet considers the overall budgetary support required; it also decides on apportioning capital support to various PSBs. After this, it sends its approval to the ministry of finance for timely and appropriate rollout.

Ideally, such a process of capitalization should have been based on a long-term plan and a well thought-out policy and strategy. However, in reality, between 2008-09 and 2014-15, all decisions to infuse various amounts of capital into PSBs seemed to be based on ad hoc considerations, varying from year to year. These were decided only through the annual budgetary process by the finance ministry. The issue was never taken up through a comprehensive planning process, backed by due diligence.

Looking at the flow of capital over the past years, out of the total capital infusion of Rs1.19 trillion, State Bank of India, the largest and a “systemically important" bank, has received the most capital, Rs26,948 crore, or about 22.7% of the total infusion. IDBI Bank Ltd, Central Bank of India, Indian Overseas Bank and Bank of India also got significant amounts—8.77%, 8.61%, 7.88% and 7.80%, respectively. Punjab and Sind Bank and Indian Bank received the lowest—0.2% and 0.24%. Indian Bank received capital only once, in 2014-15, while Central Bank and UCO Bank were given capital in eight out of nine years. (See table.)

The criteria for capital support kept on changing from year to year and it seems that efficiency was never a basis for doling out capital. It was based on discretion of the authorities. Incidentally, sometimes the government had taken loans from multilateral organizations with interest for financing capital requirements.

While capital infusion is expected to follow independent assessment by DFS, there are documented evidence that at least in one year, 2010-11, the decision on capital infusion was taken by DFS solely on the basis of projections and information received from the PSBs, without any verification. In 2010-11, Rs20,117 crore of capital was infused in three phases (Rs7,694 crore in the first phase, Rs6,423 crore in the second phase and Rs6,000 crore in the third phase).

For the second phase of fund infusion in 2010-11, the PSBs had furnished data as late as on 1 January 2011, with projections of shortfall in Tier I capital (vis-à-vis a target of 8% CRAR, or capital to risk (weighted) assets ratio) as on 31 March 2011). Accordingly, the requirement of capital for the second phase was worked out by DFS at Rs6,423 crore, which was infused.

The capital infusion in the PSBs between 2011-12 and 2014-15 was supposedly based on a series of annual performance evaluations of banks (linked to the incentives of the chairman and managing directors and executive directors) for which memorandums of understanding (MoUs) were entered into.

For example, MoUs the banks had signed with DFS in February/March 2012 included various performance parameters such as share of current accounts and savings accounts of the deposit portfolio, return on assets, net profit per employee, employee cost to income ratio, other cost to income ratio, market share of deposits, Reserve Bank of India (RBI) rating, ratio of staff in branches to total staff and outstanding NPAs over the previous two years as a percentage of total NPAs. The MoUs are supposed to be the preconditions for capital infusions.

In reality, between 2010 and 2014, as the NPAs mounted, eroding the core capital of PSBs, the MoU targets became irrelevant. Instead, the regulatory requirements regarding capital adequacy and estimates of credit growth became the basis for capital infusion. Also, CCEA approval for “need-based" capital infusion made the MoUs redundant, even though DFS insists that “only on signing MoUs and achieving quarterly benchmarks, PSBs shall be eligible to be considered for capital infusion". DFS continued with the ritual of signing MoUs after announcement of Indradhanush on the same set of parameters and entered into MoUs with PSBs as late as in March 2017.

The Indradhanush plan for infusion of Rs70,000 crore in PSBs to adequately capitalize them and keep a safe buffer assumed the projected credit growth would be 12-15%, as against the actual rate of 6-8%.

A strategic plan or back to the basics?

It seems that, for the first time in the history of India’s PSB capitalization, the government is planning to follow a longer-term strategic plan. It is working out the plan in collaboration with RBI.

According to the Indradhanush plan, for 2015-16, 20% of the earmarked capital infusion was to be allocated to PSBs based on their performance during the three quarters in 2015-16, judged on the basis of certain parameters.

However, this was not done and all funds were released on the basis of need, following the so-called asset quality review, or AQR, by RBI. Under the AQR scheme, launched in the second half of 2015-16, the central bank’s inspectors scanned the lenders’ books, identified defaulters and asked the banks to clean up their balance sheets in six quarters, by March 2017.

Even during 2016-17, DFS earmarked 25% of fund infusion based on performance, but as most of the banks fell short of the targets set, performance was not considered as a basis for capital infusion during the year. Interestingly, in March 2016, DFS decided that 25% of the capital to be infused in 2016-17 would be disbursed upfront and the remaining 75% would be disbursed based on achievement of quantitative targets by PSBs by the end of the fiscal year. It also had made it clear that those banks which do not achieve the targets would not receive further funds. However, in July 2016, DFS reversed this decision and went for 75% upfront disbursement with the remaining 25% being disbursed based on benchmarks.

Presumably it was done to ensure that the PSBs have enough liquidity to support credit growth and are in a position to raise money from the markets, but the reversal clearly violates the DFS’s objective of ensuring accountability for efficient and optimal use of capital. In fact, in 2016-17, the entire capital was released to PSBs without considering their achievement of any performance criteria.

A close look at the distribution of capital across PSBs throws up interesting facts. For instance, in 2011-12, the intent was to infuse capital in PSBs so that they reach Tier I CRAR of 8%, but SBI got much more capital than what it had required to meet this target.

While the regulatory requirement for SBI in 2011-12 was Rs5,874 crore, DFS infused Rs7,900 crore in the lender during the year, in line with the bank’s demand for capital (in the wake of impeding Basel III norms, SBI required to maintain its Tier I CRAR at approximately 11%).

Apparently, the decision to infuse an amount slightly in excess of the requirement that year was done primarily to take care of future requirements. But this does not hold water as the approval of CCEA was for maintaining a Tier I CRAR of 8% and the 11% target for Tier I CRAR was not maintained uniformly for SBI in later years.

Similarly, in 2013-14, it was imperative that the basis for capital infusion in PSBs be in line with the CCEA decision of maintaining Tier I CRAR at a level above 8% as on 31 March 2014 and the shareholding of the government as close as possible to 58%.

However, of the 20 PSBs whose assessment was done, four PSBs (SBI, Canara Bank, Syndicate Bank, UCO Bank) did not qualify as per the given criteria (they had a Tier I CRAR higher than 8% and a government shareholding above 58%) and another three (Bank of Baroda, Punjab National Bank, Union Bank of India) met the CRAR target but had a lower government shareholding. All 20 banks (including those four banks which did not qualify as per the given criteria) were, however, infused with capital during the year.

DFS had assessed a requirement of Rs15,703 crore for PSBs to meet the Tier I CRAR target in 2013-14 against an available budget of Rs14,000 crore. For meeting the CRAR goal in 13 PSBs, however, only Rs9,550 crore was infused, with the remaining Rs4,450 crore being infused in the other seven banks (of which Rs2,900 crore was infused in the four banks which did not satisfy the criteria).

No uniform criteria was followed for distributing the Rs9,550 crore capital among the 13 PSBs which fell short of the Tier I CRAR benchmark of 8%. For instance, in the case of Corporation Bank, capital infusion was Rs450 crore (more than the requirement assessed at Rs416 crore), while in the case of Allahabad Bank, it was Rs400 crore (equal to what it asked for). More on this in the next part.

This is the second of a three-part series on bank recapitalization. Read the first part here.