Home / Industry / Banking /  Narrow Banking: Why banks have shifted focus to retail loans
Back
Share Via

Narrow Banking: Why banks have shifted focus to retail loans

Quietly, and without a regulatory push, Indian banks are focusing on only retail loans, changing the very nature of banking in India

The bad loans of Indian banks, in particular, the government-owned public sector banks, simply keep piling up. There seems no end in sight, irrespective of the banking chiefs trying to tell us every three months, that the worst is behind us. In fact, as of 31 March 2018, the total bad loans of banks (loans which haven’t been repaid for a period of 90 days or more) stood at ₹ 10,35,528 crore or 11.6% of the total advances made by these banks. In September 2017, the bad loans had stood at 10.2%.

One of the solutions offered to ensure that this problem does not crop up again in the future, has been narrow banking. In fact, Arvind Subramanian, the previous chief economic adviser to the ministry of finance, had made this point in an interview to Mint on 5 July, 2018. He had called for “narrow banking" by the less viable banks.

Narrow banking involves banks taking deposits and giving out only retail loans. This takes out of the equation the ability of the corporate borrower to use political influence to get a loan from a public sector bank.

The funny thing is that even without the banking regulator (i.e. the Reserve Bank of India) or the government being involved, narrow banking seems to be happening on its own. This phenomenon and the reasons behind it have largely gone unnoticed. 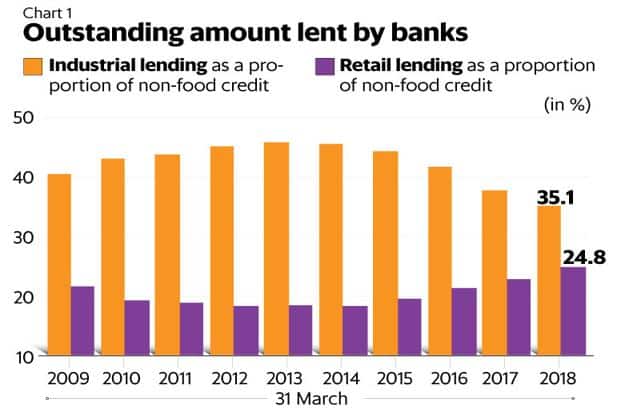 Take a look at chart 1. The Reserve Bank of India (RBI) categorises the lending carried out by banks into four categories: Industry, Services, Agriculture, Personal (or retail lending as everyone else calls it). As on 31 March 2009, lending to industry made up for 40.1% of the total non-food credit or the outstanding bank lending. On the same date, lending to the retail sector (i.e. home loans, vehicle loans, credit card outstanding, personal loans etc.) made up for 21.6% of the outstanding bank lending.

Banks give working-capital loans to the Food Corporation of India and other state procurement agencies to primarily buy rice and wheat, directly from farmers. Once this lending is subtracted from the overall lending carried out by banks, what remains is non-food credit. 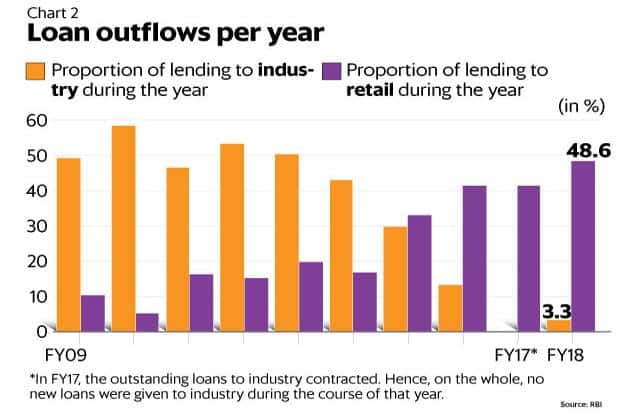 Banks can recover the loan which has been defaulted on, by selling the collateral offered against the loan. The trouble is that the rate of recovery of bad loans which have been written off, is extremely low.

What Chart 3 tells us very clearly is that once a bad loan is written off, its chances of being recovered are very low. Between April 2014 and December 2017, loans amounting to ₹ 272,558 crore were written off. Of this only ₹ 29,343 crore or 10.8% of the loans were recovered from defaulters. This means that the rate of default on bad loans was 89.2%. A large part of these loans, are loans given to industry, which have been defaulted on. Of course, Chart 3 deals with an era before the Insolvency and Bankruptcy Code (IBC), became actually active in full force. The two high profile cases settled under the IBC have been that of Bhushan Steel Ltd and Alok Industries Ltd.

In case of Bhushan Steel, the company owed the banks a little over ₹ 56,000 crore. The banks managed to recover around ₹ 35,200 crore by selling the company to Tata Steel. This means that the rate of recovery of bad loans stood at around 63% in this case. Such a high rate of recovery happened primarily because the steel sector in India is currently doing reasonably well and the fact that Bhushan Steel had an established setup to manufacture steel.

In contrast, in case of Alok Industries, a textile company, the rate of recovery was just 16%. The company owed the banks ₹ 29,600 crore, of which the banks managed to recover ₹ 5,000 crore, by selling the company to Reliance Industries Ltd and JM Financial Asset Reconstruction Co. Clearly, it is still early days for the IBC, and it is difficult to estimate what sort of recovery banks can expect under it, even though the rate of recovery is likely to be better than was the past.

It needs to be mentioned here that as of December 2017, cases have been filed against 39 large defaulters under the IBC. These defaulters have a funded exposure of ₹ 2.69 trillion.

In this scenario, it is but natural that banks have more or less stopped lending to the industry and have been giving out retail loans in a significant manner.

Other than the banks not wanting to give loans to industry, there is also the question of whether the industry needs to borrow. What does the data suggest on this front?

■ The RBI Order Books, Inventories and Capacity Utilisation Survey (OBICUS) tells us that the capacity utilisation rate of Indian manufacturing companies has ranged between 71-74% for a while now. There is huge idle capacity in India’s manufacturing sector. More than a fourth of the capacity is not being utilised. In this scenario, it doesn’t make any sense to expand, until there is enough demand for companies to first utilise this idle capacity. This also explains why there is little demand for industrial credit from banks.

■ Data from the Centre for Monitoring Indian Economy tells us that the investment projects worth ₹ 6,51,509 crore were dropped in 2017-2018, an increase of 57.2% from 2016-2017. This is another factor which tells us that the demand for credit from banks by the industry is weak. If projects are being scrapped, there is no reason for firms to borrow.

■ Funding from non-bank sources to the commercial sector remains strong. In 2017-2018, the funding grew by 2.1% to ₹ 733,600 crore. This basically means that whenever the industry needed to raise money, it has been able to do so from non-banking sources.

All these factors put together essentially imply that over the last few years, banks have had no option but to up their retail game. This has led to a situation where in 2017-2018, almost half of the lending carried out by banks, was to the retail sector. In fact, lending to the retail sector makes immense sense for the banks because of the low bad loans rate.

The overall bad loans rate on lending to retail has stayed at around 2% for a while now.

Take a look at Chart 4, which shows the bad loans rate for housing loans and auto loans.

It clearly tells us that the bad loans ratio for housing loans and auto loans continues to remain low. In case of housing loans, the ratio has jumped a little from 1.31% of the total housing loans to around 1.72%, between March 2016 and March 2018. This is a substantial jump but compare this to the 22.8% bad loans rate (and growing) for lending to industry.

That’s the reason driving narrow banking. And after all, for once, we may not require any intervention by the RBI and the government, to nudge the banking sector in what is perhaps the right direction.

Vivek Kaul is the author of the Easy Money trilogy.