New Delhi: The Employees’ Provident Fund Organization (EPFO) on Tuesday announced an 8.8% interest rate on provident fund savings for 2015-16, bringing a smile to over 40 millions of organized sector employees.

“EPFO and the labour ministry decided to go for 8.8% rate of interest," said D.L. Sachdeva, a member of the central board of trustees (CBT) of EPFO representing the employees. CBT is the apex decision-making body of the retirement fund manager.

The financial audit and investment committee (FAIC) of EPFO in January said its earnings in 2015-16 has the potential to offer a rate of 8.95%. The panel, comprising representatives from employees, employers and the government, had then projected that EPFO will earn more than R34,844 crore in 2015-16, and that will be sufficient to offer an interest rate of 8.95% to subscribers. EPFO distributes interest rate as per the income generated from its investments every year and does not take money from the government. 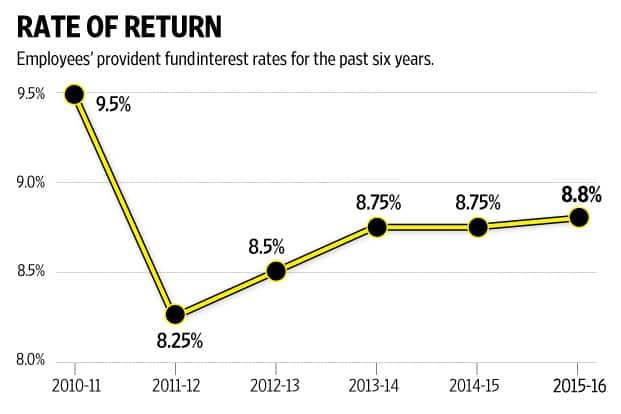 “CBT decided to go for an 8.8% rate keeping in mind all realities—earnings projections, market sentiments and other factors," said Shankar Aggarwal, secretary, labour and employment, and vice-chairman of CBT, adding that the decision was taken after considering the long-term interest of workers. “We cannot squander the good return in one year because if we don’t get a better yield next year, it will be tough to come down from, let us say, 8.95% to 8.4%," he said over the phone.

He said the ministry told trade unions that it is an interim decision. “And in case after audit of EPFO finances we are in a position to give more, we shall consider," Aggarwal said.

But Sachadeva and Virjesh Upadhyay, another CBT member and general secretary of the Bharatiya Mazdoor Sangh (BMS), said they are not convinced. “At the fag end of the fiscal, you don’t announce interim rate," Upadhyay said, adding that unions have registered their protest as the retirement fund manager was in a position to pay 8.95% interest rate.

“We fail to understand why they are so hesitant to give 8.95% payout," Upadhyay said. BMS is the labour union backed by the Bharatiya Janata Party (BJP).

Sachdeva, however, was more forthright in his criticism. “The labour ministry is under severe pressure from finance ministry. The ministry document circulated during the meeting underlines that 8.95% interest rate is feasible and yet by the end of the four-hour long meeting, they went for 8.8%," he said.

A labour ministry official said since the market sentiment is volatile and income in the coming fiscal may not be as good as this year, it is “very important to have some cushion. A surplus money with EPFO is a better situation than walking a tight rope".

Since the finance ministry has favoured a rate cut on small saving accounts and even Public Provident Fund (PPF) is not earning as much, it would have been difficult to justify a more than 8.8% rate of return on EPF, said the official, declining to be named. Currently, the interest rate for PPF is 8.7%.

The CBT decision on interest rate is final and EPFO will have to get the customary nod from the finance ministry before notifying it. EPFO manages a total corpus of ₹ 8.5 trillion—nearly ₹ 6.5 trillion directly via its own fund managers and the rest through the exempted trusts or trusts run by companies who manage their own PF corpus under EPFO guidelines.