Bengaluru: Moves by Flipkart Ltd and its unit Myntra to become mobile app-only stores are intended to save on the cost of running separate platforms and accelerate a consumer shift towards using smartphones as the preferred medium of shopping online.

Depending on how you look at it and who you speak to, the moves are either bold and inspired steps to drive even more customers to the shopping apps or missteps that will unleash a customer backlash similar to the one Flipkart faced when it goofed on its Big Billion Day sale last year.

Flipkart and Myntra have already shut their mobile websites in their first big move toward becoming mobile app-only shops and both are considering shutting their desktop platforms, too, Mint reported on 20 March. On Monday, The Times of India newspaper reported that Myntra would close its desktop site on 1 May.

Here are some numbers that show why these companies are considering becoming app-only: Flipkart generates about 75% of its traffic from the mobile app, while that number is 90% for Myntra. Both the shopping apps are among the 15 most-downloaded apps on Google Inc.’s Android-backed phones in India.

Flipkart, which claims to have 26 million registered users, has app downloads of more than 11 million while Myntra app downloads have exceeded six million so far.

“We want to do whatever it takes to win on mobile; that’s the top priority," said Mukesh Bansal, head, commerce platform, at Flipkart and chief executive at Myntra. “For us, there is no risk at all of losing sales in shutting the m-site. People who were using the m-site have downloaded the app. For now, desktop is part of the experience. But we’re thinking of the best way to strengthen our leadership in mobile."

Large mobile-only shops abroad are rare; Indian shoppers have taken to mobile commerce much faster than those in the US and China.

The number of mobile Internet users in India is expected to reach 213 million by June, according to a 2014 report by lobby group Internet and Mobile Association of India and market researcher IMRB International. Another report, a joint effort by Google and A.T. Kearney, predicts that by 2017, India will have 480 million mobile Internet users.

Apart from the business opportunity offered by the growing use of mobile phones for shopping, there are cost benefits of going app-only for e-commerce companies.

Advertising on the app is cheaper compared with the desktop, said Mausam Bhatt, senior director, mobile commerce and digital marketing, at Flipkart.

“More importantly, mobile enables much more targeted and personalized marketing compared with other platforms. The mobile experience is going to improve significantly as we roll out new and innovative features that will make shopping seamless. This kind of experience is not possible to give on the desktop," Bhatt said. 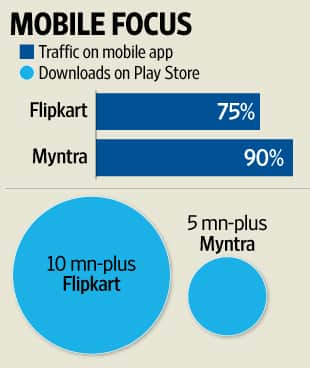 Being app-only is not about restricting consumers; it is rather about being on the right side of consumer habits, said Bhavik Rathod, general manager at Uber Bengaluru. The world’s largest taxi hailing service is a mobile app-only platform.

“Increasingly, people are using their phones to do everything. Whether it is ordering an Uber, buying groceries or shopping fashion, a smartphone allows you access on the go. When you do a cost-benefit analysis in a situation where 70-80% traffic or more is coming from the mobile, it just isn’t viable to have three separate platforms," Rathod said.

However, booking a cab caters much more to on-demand needs compared with shopping for phones, apparel, books and large appliances.

Flipkart and Myntra are involved in an intense battle with Snapdeal and Amazon India for dominance of India’s e-commerce market and may not be in a position to lose out on any sales to these rivals, analysts said.

Apart from competitive pressures, infrastructure issues that are entirely beyond Flipkart’s control may put at risk any potential efforts by the company and Myntra to become app-only.

Payment failure rates are significantly higher on the mobile because of inconsistencies in mobile Internet speed, which also hurts the user experience on the mobile. Then, there are questions about whether mobile operating systems on low-cost smartphones will be able to support apps such as Flipkart’s and others in a seamless manner.

“It’s a bold move, but I think it’s a fair risk for them to take considering the huge amount of traffic already on the mobile,"said Rachna Nath, executive director at consulting firm PwC India. “There are a lot more mobile phones than laptops or desktops. If you’re a loyal customer of Myntra, then the platform won’t matter to you. But does Myntra have enough loyal customers who will download their app even if they haven’t got it already? This is a very interesting scenario."

Eventually, shoppers will decide the fate of Flipkart’s and Myntra’s moves to become app-only platforms, if and when these companies close their desktop sites.

Following news reports of Flipkart and Myntra going app-only, some people scoffed at these moves on social networking sites Twitter and Facebook.

The two sites would lose out on customers such as Abel Abraham, a 27-year-old professional who shops for phones and apparel on e-commerce sites.

“I’d much rather shop on the desktop than the mobile. For things like fashion and large appliances, it’s much better to see them on a larger screen, which a mobile obviously cannot offer. If a company offers only their app for shopping, I would rather shop elsewhere," he said.