Banks have started work on debt resolution plans and filing insolvency cases against NPA accounts in RBI's second defaulter list, well ahead of the December deadline

Mumbai: Banks have started work on debt resolution plans or are in the process of initiating insolvency proceedings against defaulters named in the central bank’s second list well in advance of the 13 December deadline set by the regulator, three senior bankers said.

In June, the Reserve Bank of India (RBI) sent its first list of 12 defaulters to their creditors for the quick launch of resolution proceedings at the National Company Law Tribunal (NCLT) under the Insolvency and Bankruptcy Code (IBC). The borrowers had bad loans totalling Rs2 trillion. 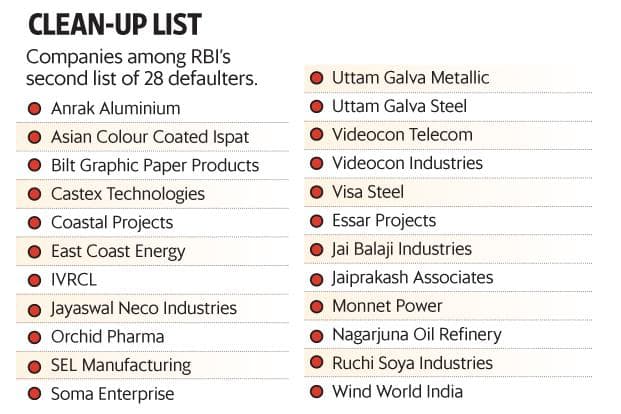 Many accounts in RBI’s second list are already in the process of debt resolution and most lenders have set aside adequate money to cover the risk of default, indicating that efforts to resolve the bad-loan pile will gather pace. Banks, mainly public sector lenders, are weighed down by stressed assets amounting to Rs10 trillion.

“Aggregate sector-level provisioning should be adequate, but bank-wise there may be some deficit. But it is not expected to be large... even if the account goes to NCLT," the chief executive of a state-run bank said on condition of anonymity.

Banks have till 13 December to finalize resolution plans for at least 28 accounts that are part of the second list, failing which they will have to initiate insolvency proceedings. In the interim, banks have the option of reinforcing provisions progressively and then moving the accounts to the NCLT.

Banks, according to the central bank’s directive, have to provide 50% against all loans advanced to borrowers referred to the NCLT.

As a first step, lenders are identifying accounts already going through debt resolution under schemes such as change of management under strategic debt restructuring and bifurcation of debt into “sustainable" and “unsustainable" portions under the scheme for sustainable structuring of stressed assets, also known as S4A. Once a list is drawn up, creditors will identify the firms where restructuring could be successful.

Lenders may file for insolvency proceedings even before the 13 December deadline for accounts where restructuring is expected to fail, said a banker with another state-run bank, also on condition of anonymity.

NCLT will speed up the resolution process, but resolving most of these stressed assets through any route, including IBC, would entail banks sacrificing a portion of the principal and interest due to them, said Suresh Ganapathy, an analyst at Macquarie Research Equity. “To that extent, there will be pressure of increased provisioning."

“We have no comment to offer as JAL’s resolution plan was approved on 22 June by JLF (joint lenders’ forum)," Jaypee Group chairman Manoj Gaur had said then.

Venugopal Dhoot, chairman and managing director of Videocon, said on Tuesday that the company will not be referred to NCLT. “We have an in-principle approval from our lenders to restructure our domestic loans as we are pumping Rs3,000 crore as equity. Our loans will be restructured by September," he said, adding that bank exposure was Rs21,000 crore.

Others such as Coastal Projects Ltd and Soma Enterprise Ltd, part of the new list, are working with lenders on a resolution plan.

“We have submitted a resolution-cum-revival plan to the monitoring institution, i.e. SBI (State Bank of India). We are expecting that it would be considered positively," T. Srinivasa Rao, director of Coastal Projects, said in an emailed response.

Soma Enterprise said it was in advanced talks with its lenders to restructure loans under S4A before December.