Nasscom now expects IT exports growth between 8% and 10% in the year ending 31 March, slower than the 10-12% range predicted in February

New Delhi: India’s software services industry will grow at a slower pace than estimated earlier as events such as Donald Trump’s victory in the US election and Brexit weigh on exports, industry lobby group Nasscom said on Wednesday.

Nasscom now expects information technology (IT) exports to grow between 8% and 10% in the year ending 31 March, slower than the 10-12% range it had predicted in February, the industry lobby group said. 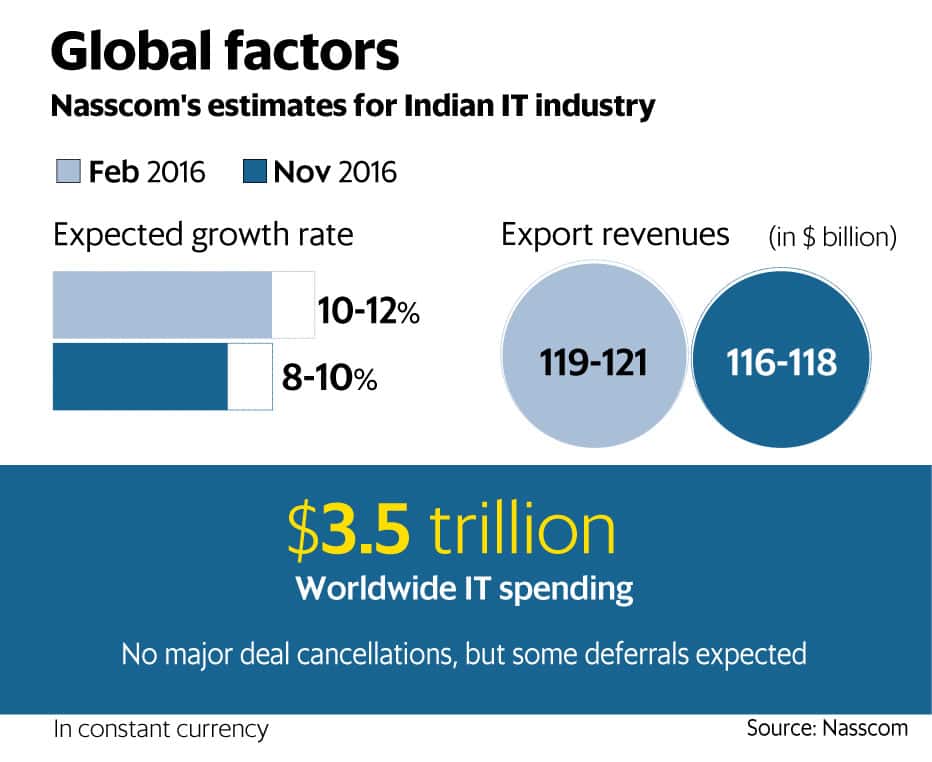 During his election campaign, president-elect Trump had repeatedly spoken about restricting immigration and putting curbs on foreign companies taking away US jobs. Software services exporters such as Tata Consultancy Services Ltd (TCS) and Infosys Ltd rely on the H-1B visa programme to send hundreds of workers to client sites in the US. The future of these engagements has become uncertain, analysts say.

The economic slowdown in key markets in Europe has also added to the uncertainties, Nasscom said. The UK’s decision to exit the European Union and the accompanying currency volatility, along with a slowdown in discretionary spending among overseas clients, has also hurt growth in the sector.

The IT industry will take time to recover from the slowdown, said Vishal Tripathi, research director at Gartner Inc. “The global sentiments have impacted IT industry and it will take some time to bounce back," Tripathi said.

“The industry is going through a transient phase with various domestic and global factors impacting its performance. Global projected growth for the industry is high and our share remains strong," said R. Chandrashekhar, president of Nasscom.

The effect of global politics and change in economic dynamics within and across borders is expected to continue for a couple of more quarters, Nasscom said, adding that it expects these factors to be short term.

“The worst is behind us," added Chandrashekhar.

Indian IT companies have struggled for growth for quite some time now. They reported among the weakest set of results in the September quarter, traditionally a seasonally strong period for the sector. TCS and Wipro Ltd reported either flat revenue or a decline from the preceding quarter.

Ahead of the earnings season, analysts had warned that investors should brace for what is likely to be the weakest performance since the global financial crisis. But things turned out to be far worse than expected, especially in the case of TCS, which reported a mere 1% sequential growth in constant currency terms for the September quarter—slower than the 2.5% growth analysts had expected.

At Infosys, revenue grew by 3.9% in constant-currency terms sequentially and operating profit rose 7%. It also cut its annual revenue growth target last month for the second time in three months.