New Delhi: India’s economic growth under the previous Congress-led coalition government was slower than estimated earlier and was never in double digits, according to the revised GDP numbers released by the government on Wednesday.

The new GDP data, pertaining to the years between 2005-06 and 2011-12, has sparked off a heated exchange between the Congress and the ruling Bharatiya Janata Party over the performance of the economy during their respective terms.

With general elections due next year, the Narendra Modi- led National Democratic Alliance government is likely to use the new data to claim that its management of the economy has been superior to that of the Congress-led United Progressive Alliance (UPA) when it seeks a second term.

According to the back-series data, the Indian economy grew at an average of 6.67% in the nine years ended 31 March 2014 when UPA was in power, slower than the 7.35% achieved in the four years ended 31 March 2018, with Modi as the prime minister. It also shows that the highest growth rate the Indian economy has so far achieved is 8.5% in 2010-11, against the 10.3% estimated using the older base. 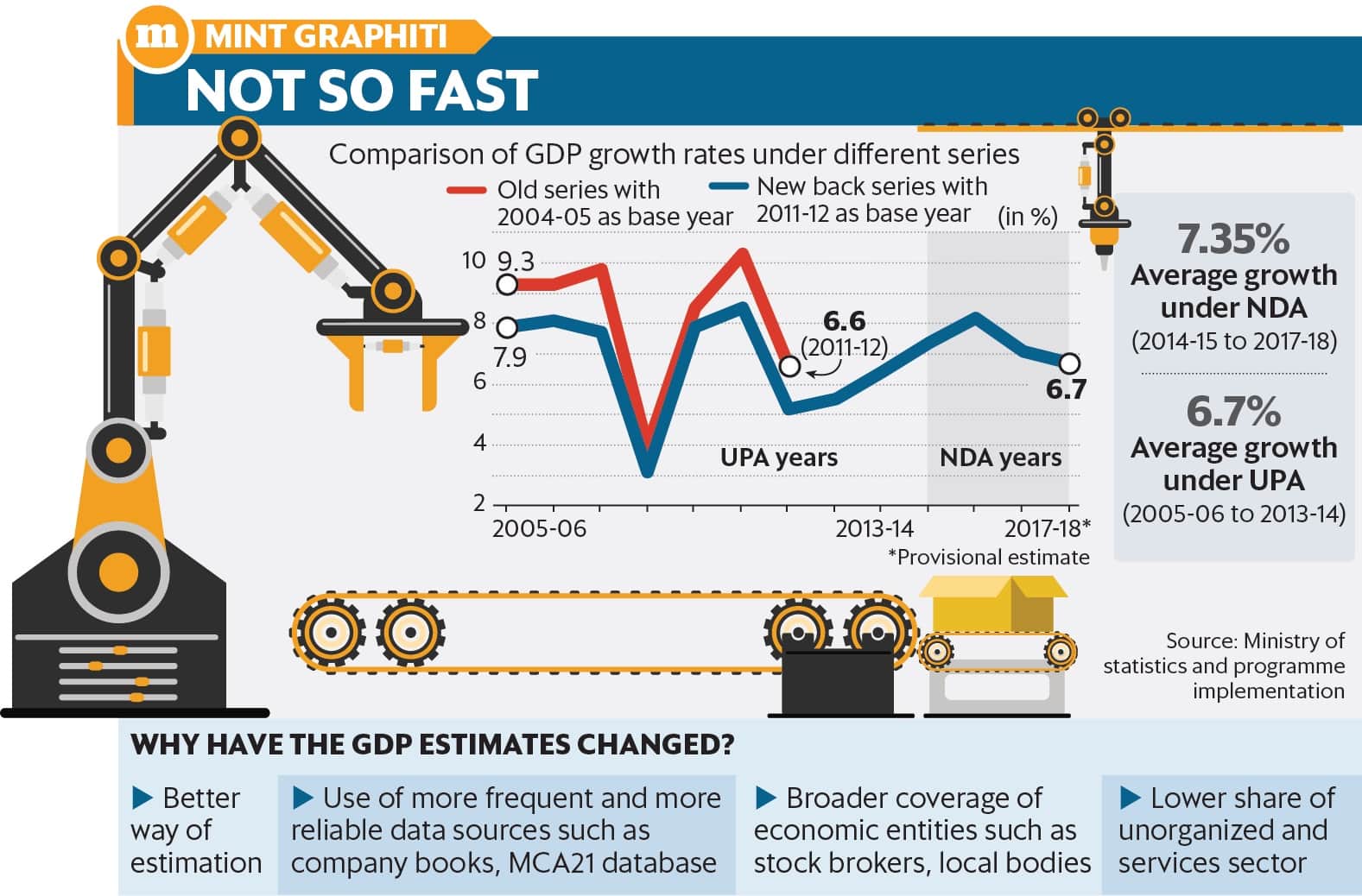 The link between the old and new GDP series through the back-series data is crucial as it helps in better economic forecasting. The link has so far been missing after the government shifted the base year to 2011-12 from 2004-05.

Anticipating criticism of the numbers as they drastically scale down growth in the UPA era, Rajiv Kumar, vice chairman of NITI Aayog said the new series, based on the 2011-12 base year, is superior to the earlier one. “It is in complete sync with the UN system of national accounts. Any feeling around the new series that it is overestimating should completely be dispelled."

“They are a bad joke. Actually, they are worse than a bad joke. The numbers are the result of a hatchet job," Chidambaram said in a post on Twitter. He also questioned whether the National Statistical Commission had been disbanded as it did not calculate these numbers.

Congress leader Randeep Singh Surjewala accused the government of “resorting to malicious and fraudulent jugglery of GDP figures to hide the enormous body blow caused by them to India’s economy".

The new data shows that growth in the tertiary sector was much slower than initially estimated on account of changes to unorganized trade, communication and financial services.

The government attributes the lower growth rate in the unorganized sector in years prior to 2011-12 to better estimation of trade data using sales tax.

The numbers released by the government on Wednesday are also vastly different from the estimates put out by a subcommittee of the National Statistical Commission headed by N.R. Bhanumurthy in July. Its back-series calculation had showed that the Indian economy grew at a much faster pace during UPA’s tenure and had registered double-digit growth in two years—10.23% in 2007-08 and 10.78% in 2010-11.

Statisticians and economists questioned how the back-series data shows slower GDP growth compared to the old series for the years before 2011-12 and higher for the period after 2011-12.

“By and large, one methodology does not apply to every sector and this is the correct way to do it. But having said that, what I am concerned about is that for the entire period from 2004-05 to 2011-12, for all the sectors, the growth has been scaled down," said Pronab Sen, programme director for the India programme of the International Growth Centre and former chief statistician of India. “I don’t know how this systematic scaling down has been done. It was expected for the tertiary sector but not for the secondary sector."

“We have got official series now, for which we have been waiting for long, although there could be some discussions on database used in back series," said Bhanumurthy, professor at National Institute of Public Finance and Policy.