Home / Industry / Was the boost in digital payments after demonetization temporary?
Back
Share Via

Was the boost in digital payments after demonetization temporary?

Debit card transactions have doubled thanks to note ban, while growth in credit card usage has sped up

One of the stated aims of the demonetization exercise of November 2016 was to give a boost to digital payments. While digital payments soared in the wake of demonetization (since people had to find quick substitutes for cash), critics were quick to point out that it was a temporary effect, and the payments would be back to their pre-demonetization levels once there was sufficient currency in circulation again.

With the benefit of hindsight, and Reserve Bank of India (RBI) data, we can say that demonetization did have a large positive impact on digital payments. In fact, based on one metric, the volume of digital payments in India has doubled thanks to demonetization. This metric is the total value of transactions made using debit cards at point of sale (PoS) machines.

For over a decade now, most bank accounts in India have come attached with an ATM card which also doubles up as a debit card. Prior to demonetization, however, these cards were largely used for withdrawing cash from ATMs, rather than being used at PoS machines. While these cards are still being used liberally to withdraw money from ATMs, there has been a level-shift in their use at PoS. As Figure 1 shows, after the post-demonetization spike, usage of debit cards at PoS terminals reached a steady state sometime around March-April 2017. And if we look at the blue dotted line, which shows the trend at which digital payments would have grown in the absence of demonetization, we see that the actual data point for January 2018 (around Rs40,000 crore) is about twice the value suggested by the trend line.

The growth rate of debit card usage at PoS, however, has fallen compared to pre-demonetization times. In the four years leading to demonetization, value of debit card transactions at PoS grew at a compounded annual growth rate (CAGR) of about 30%. After stabilization following demonetization, however, this rate is closer to 10% (the last number is an approximation since we don’t have a full year of data yet after stabilization, so might be subject to seasonality).

Credit cards, on the other hand, weren’t affected as much by demonetization, possibly because users of credit cards were already clued in to the digital payments network. 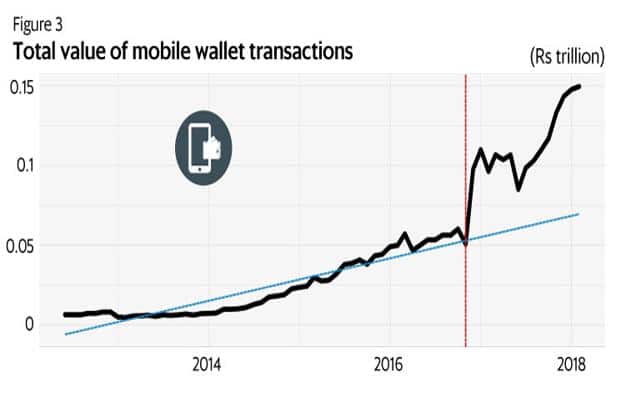 Prepaid payment instruments (mobile wallets such as Paytm, FreeCharge or MobiKwik) show an altogether different, and interesting pattern of growth. There was an initial spike associated with demonetization, followed by a dip in mid-2017 as cash returned to the economy. And then, as Figure 3 shows, there was a second boost which has put mobile wallet payments on to a different trajectory altogether! It is not easy to infer the reasons for this second boost from the data.