The Indian economy’s growth in the June quarter, 5.7%,  has been worse than expected. Economists expect the current quarter to see much higher growth.  But how significant is the slowdown? And how sharp will the recovery be? Here are nine charts that sketch the anatomy of the slowdown and look ahead: 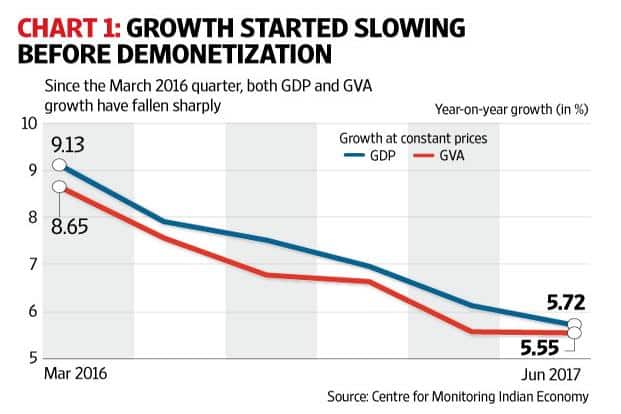 Chart 1 shows the depth of the slowdown, with growth in both gross domestic product (GDP) and gross value-added (GVA) at constant prices steadily falling from the June 2016 quarter. The fact that growth started tapering before demonetisation indicates the economy was already weakening before the demonetisation shock hit it. The fall in growth in the June quarter is also on account of the disruption caused by the introduction of the goods and services tax (GST).

Chart 2: Industry has been the worst hit 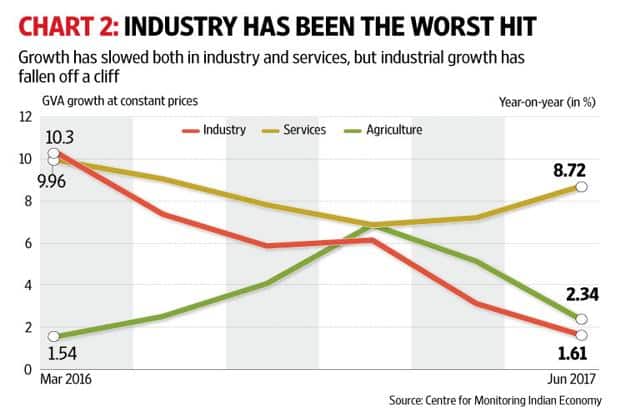 The slowdown has affected the industrial sector the most, with industrial growth slowing from 10.3% in the March 2016 quarter to a piffling 1.6% in the June 2017 quarter. That is truly bad, whatever spin anyone puts on it. (Industry includes the construction sector in this analysis). While growth in services too has slowed, it hasn’t been so bad and there has been an increase in the June 2017 quarter. Growth in agriculture has looked up after two drought years.

Chart 3: Government spending to the rescue Government spending has propped up growth in the last few quarters. Chart 2 shows government spending growth moved up sharply since the June 2016 quarter, increasing by double-digits in the December 2016 and March 2017 quarters, thus managing to offset the impact of demonetisation to some extent.

Growth in government expenditure slackened a bit in the June 2017 quarter, implying that private sector services have picked up the baton.

Chart 4: And what’s happening in construction? The construction sector is important because it is a major source of jobs. Chart 4 shows growth in construction activity has slowed from the highs of December 2015 and March 2016. There has, however, been a minor rebound from the contraction seen in the March 2017 quarter. Very likely, it is government spending, especially on roads, that has led to the modest increase in construction growth.

Chart 5: Private consumption growth is down 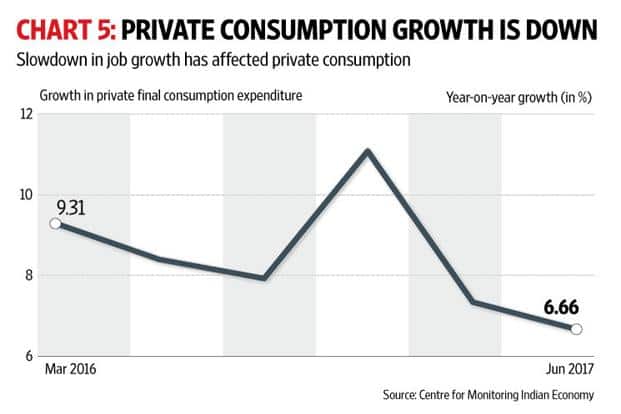 Private consumption growth has been slowing steadily from the June 2016 quarter, although there was an astonishing rise in the December quarter, in spite of demonetisation. There could be several reasons for the fall in consumption growth—a cash crunch, loss of jobs in the informal sector, loss of jobs in the information technology sector, tepid rise in salaries, rural distress and slow growth in employment.

Chart 6: The growth in fixed assets is no reason for cheer 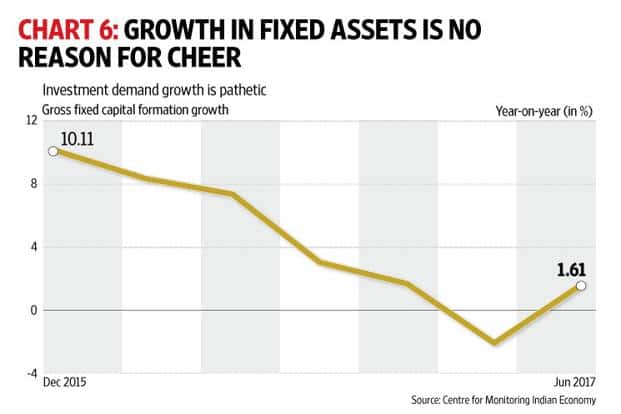 Calling the June quarter growth in gross fixed assets a recovery would be a fervid leap of the imagination. It is certainly no sign of a revival of investment demand. True, the central government has increased its capital expenditure, but that by itself is hardly enough to move the needle.

Chart 7: Exports continue to be a pain point The external sector has been a drag on growth, since growth in exports has been much slower than that of imports. It’s nothing new, but as Chart 7 shows, the negative contribution of net exports to GDP moved up steeply in the June 2017 quarter. Consumers have shown a large appetite for imported electronic goods. Rupee appreciation too may have had a hand in it. 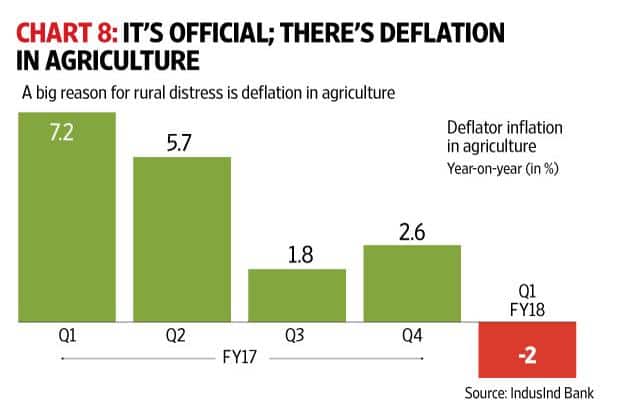 The national accounts data shows we now have deflation in the agriculture sector, which means falling prices for farm produce. Inflation according to the GVA deflator in agriculture was a negative 2% in the June 2017 quarter. This is why farmers have been so restive. Chart 9 shows the trend in core GVA growth. The silver lining is that non-farm, non-government GVA growth has recovered from the depths to which it had sunk in the March 2017 quarter. That is probably due to remonetization. But a look at the chart shows how weak it still is compared to the highs reached in the March 2016 quarter. Indeed, core GVA growth is a pale shadow of what it was for most of 2012-13 and 2013-14.

Are we going to have a decent bounce off the bottom? Economists are agreed the economy will do better in the current quarter, as firms restock after the GST disruption. The base effect will also give us the impression of higher growth. On the flip side, government support may not be so robust in future, as the spending loses steam. More ominously, since the slowdown started before the note ban, the cyclical downturn may continue even after the recovery from the twin disruptions of demonetisation and GST.

Much will depend on how soon consumption recovers. As these charts show, we have a long way to climb back.