At some point in the course of any conversation, Rajesh Kamat and this writer share an exchange that usually goes like this:

Him: Explain to me again what you have against Balika Vadhu.

Me: Child marriage cannot be entertainment. It’s exploitation of India’s dark side. 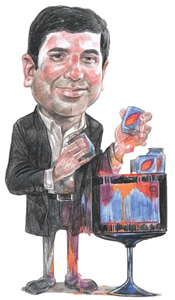 “Balika Vadhu touched a 6 last week," he tells me about one of India’s highest rated television shows.

“I tried watching it a couple of days ago. The old lady was fighting with a man but I couldn’t figure out why. It sounded too complicated," I reply.

“Two days ago, you should have loved it! Sugna was getting married and her in-laws had not been told that she was pregnant," he says. “What you call complicated was an episodic high."

Colors turned 1 on 21 July and by now Kamat, the 35-year-old CEO of the channel, is used to living from week to week. He gets news of the past week’s television ratings 3 or 4 hours after midnight every Tuesday. “At least four of us are awake, on standby. The information is not going to change by the morning but we’re used to staying up and it’s too close to call. Besides, there’s too much passion." Incidentally, in the latest ratings, Colors scored 308 GRPs, its highest ever.

For the past several months, analysts and industry watchers have been tracking the battle in the general entertainment channel (GEC) segment so closely, you would think nobody watches anything else on Indian television. Actually, around one-third of viewers park their remotes in this space.

Since Colors came on the scene, it’s been vintage David versus Goliath. Nine-month-old channel climbs all over Star Plus, a channel that has easily dominated for nine solid years. New channel also aids in the death of the saas-bahu genre, one that has ruled Indian television through the 2000s. So much so that the longest running show ever, Kyunki Saas Bhi Kabhi Bahu Thi, goes off air abruptly. Star Plus replaces it with a reality legal show hosted by the country’s most well-known policewoman! It’s what Kamat would call disruption, his favourite buzzword from Day 1.

And yet, the championship never rests with any one channel.

Star Plus-Colors-Star Plus-Colors: The two channels wrestle for the top spot every week. Ever so often, third competitor Zee TV steals the title. The result has been a never-seen-before mix of fiction and non-fiction programming. And more experiments than you could have imagined in your wildest dreams.

The next experiment on Colors will be 100%, a “fusion" of fiction and reality based on an Argentinean format from leading entertainment programmer Endemol. Kamat explains it as Gladiator meets Khiladiyon Ka Khiladi (don’t tell me you’ve forgotten the 1996 film starring The Undertaker? Surely you remember Akshay Kumar mud-wrestling Rekha?).

In the new show, which goes on air next month, 13 combat-show wrestlers from South Africa (Daredevil, Skull, Ananzi—the Great Khali, too, it is rumoured, but Kamat won’t confirm) will take on 13 Indian wrestlers, auditioned from local akharas across the country. “They are under the impression that they are going there for a fight. But they are punching bags, one of them dies and then 12 of them come together," he recounts. When he notices my horrified expression, he repeats: “It’s fiction, the backstory. There are four WWE bouts in every episode, but with a fiction story around them."

Kamat is hoping that children and men will get hooked to the weekend show. “Viewers are willing to experiment and that’s a message that should keep all broadcasters on their toes," he says. “Because that means exit barriers are low—change is just a remote up or down." On weekends, especially, Kamat is determined to draw the “flirting audiences", those idle surfers on the prowl for something new and interesting.

Television is in the eye of such rapid economic and social change that it’s tougher than ever to figure out what audiences really want. Gut feel is pretty much what drives this guessing game. These days, “real" fiction works—child marriage, female foeticide, caste and kidnappings are big sellers. “The desired audience response is: Haan, yeh hota hai," says Kamat. Translated, these things really do happen out there in real India.

For Kamat, new India is striving India. The elusive middle class, he believes, is finally visible. “The income pyramid has become a rhombus because the middle is now jutting out. There’s a homogenization of needs, but traditional values remain." 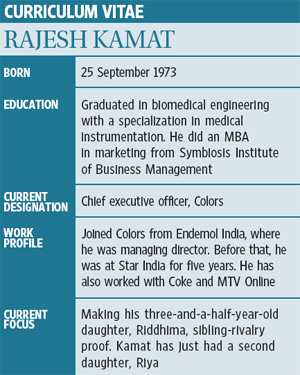 Looking at the ever-smiling Kamat, it’s difficult to tell that he is even acquainted with stress. I know he doesn’t gym or run, because he’s told me that in a previous meeting. “My daughter Riddhima is my main leveller in life. When you see life from this height (he gesticulates), how does it look? That really gets you back to earth, whatever your level of stress. It doesn’t matter if your rating was 0.3 ahead or 50 behind. If she wants to make tea in her kitchen set and wants you to drink it, you have to," he says.