She was a little over 13 when she was kidnapped and forced into the sex trade. In 1986, this young girl was one of the first six people in India that Suniti Solomon detected as being infected by the human immunodeficiency virus, or HIV. 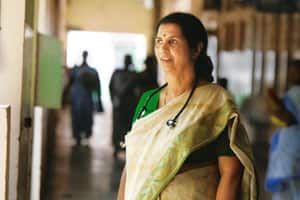 Inspired by Mahatma Gandhi: He was so simple, humble and quite unlike what we see in the politicians of today. M. Laxman / Mint

Since then, Chennai-based Solomon’s life has revolved around people affected by AIDS, the condition that HIV causes. “The minute someone says he or she is HIV positive, the word which crops up in most people’s mind is ‘immoral’," says 69-year-old Dr Solomon, sitting in her office in south Chennai. “She was the first girl we tested that I spoke to, and she changed me."

The young girl, who resisted her assailants for three days, gave in after being starved for 72 hours. Six months later, she managed to escape, reached a remand home in Mylapore and was one of the 100 sex workers that Solomon tested. After spending six years at the remand home, she joined Dr Solomon’s non-profit YR Gaitonde Centre for AIDS Research and Education (YRG CARE), established in 1993, but died soon after.

“It was frightening really," says Dr Solomon, herself the only girl among eight children born to the Gaitondes, a Chennai-based Maharashtrian Hindu family in the leather trade. “My husband was a little worried and didn’t want me to work with HIV-positive patients, most of whom at that time were homosexuals, those who self-injected drugs and sex workers. And I said, look, you have to listen to their stories and you wouldn’t say the same thing."

The former teacher of medicine continues to be a counsellor, matchmaker, doctor, researcher and educationist for HIV patients. While most of the work in this field in India is geared towards spreading awareness about the disease, Dr Solomon’s organization provides medical help, counselling and employment opportunities for HIV/AIDS patients.

Her interest in medicine was triggered by the health officer’s annual visits to the Gaitonde home, when the eight children would line up for smallpox vaccine shots. She studied at the Madras Medical College, where she met her husband, a cardiac surgeon.

For a little under a decade, she trained in pathology in Britain, the US and Australia, while travelling with her husband. But in 1973 the couple returned to settle in India, and work at a government-run hospital.

She went on to do her doctorate in medicine (MD) in microbiology and after serving as an assistant professor for a few years at the Madras Medical College, became a professor. That is when Dr Solomon, who was reading up on HIV/AIDS, decided to track the virus in India. With no openly gay community in the country in the 1980s—the first cases of HIV in the US were detected among gay men—she and one of her doctoral students decided to check the blood samples of female sex workers in Chennai. “The results of the first six tests were frightening," she recalls.

According to the latest figures from the World Health Organization, an estimated 2.5 million people in India are HIV-positive or are afflicted by AIDS—the third largest population, after South Africa and Nigeria, among the 33 million people affected by the virus worldwide. “Even if three million are infected, only 20-30% of them know their status," Dr Solomon says.

The weekly traffic at the YRG CARE clinic has gone up by 10 times since 1993; it now has 12,000 registered patients. More and more people are able to live longer with the help of drugs that in some cases now cost just 2% of the earlier rate.

But what is distressing to Dr Solomon is the rising percentage of Indian women infected by this virus (from 10% of the affected population in the 1990s to 50% now) even though 80% of them have single partners. Several Indian men often don’t disclose their illness to their families and give in to parental pressures to marry, endangering the life of an uninfected woman. Even if the man practises safe sex after counselling, there comes a time when the wife wants a child. “In some part of India, being childless is still a bigger stigma than being HIV-positive," adds Dr Solomon, who herself faced a lot of societal pressures before she had her son, nearly 13 years after her marriage.

For Dr Solomon, the biggest joy is when she tests children of infected parents, usually brought in at 18 months, and the result is negative. At the time of our interview, her fridge was stocked with Mysore pak, a sweet, because a girl who had been brought to the centre had tested negative. Her HIV-positive mother had contracted the virus after a transfusion.

The problems persist. Parental disclosure to HIV-positive children is an issue most elders choose to postpone. And then there is the constant pressure of ensuring her patients take the prescribed medicine. “My biggest fear is a resistant virus," says Dr Solomon. “Then we would need new drugs, which means more money for research to find new drugs."