EA Sports' new basketball game is one of the rare games of its genre, meant for smartphones

Basketball games have been very popular with PC users but we have rarely seen any of the big titles such as the EA Sports’ NBA make it to smartphones and tablets. The few basketball games that we have come across have never been closer to the NBA. However, with the NBA Live Mobile, EA Sports has finally come up with a game that mobile users had been waiting for.

The game works on the freemium model, where you can download a game for free and pay extra for additional optional features as you play the game. These payments are optional, so if you don’t really want to cough up real money on a game, you can still play the game. EA Sports has been using this model for all its mobile games.

Users also need an active internet connection to login and play the game. This means you need a stable WiFi network as most of EA Sports’ online games take time to establish connection with EA servers and work smoothly due to heavy traffic.

NBA Live feels a lot smoother and loads faster as the number of users is still low. Surprisingly, EA Sports has kept the file size low. The game takes up 95MB after installation and adds another 60 MB after a few days of gameplay. What we like is that the game doesn’t feel cheap or lacking in visuals. 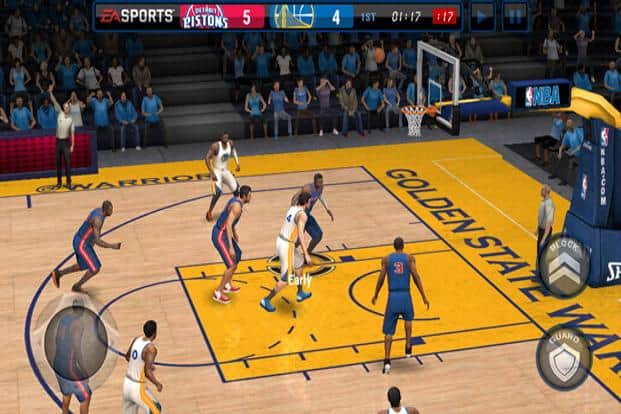 The low file size can be attributed to the fixed camera angles of the game. EA Sports hasn’t tried to capture every nuance of the game with detailed close-ups and replays and has stuck with the fixed sideline view throughout the game. Those who have played an NBA game on PC and console will miss the visual element, but for someone who is more into mobile games, this is a lot better than any of the shoddy basketball games we have seen. Since EA Sports has the official license for NBA teams and players, one can take control over their favourite teams and players. Team jerseys, player details and the movements have been reproduced brilliantly on the small screen. 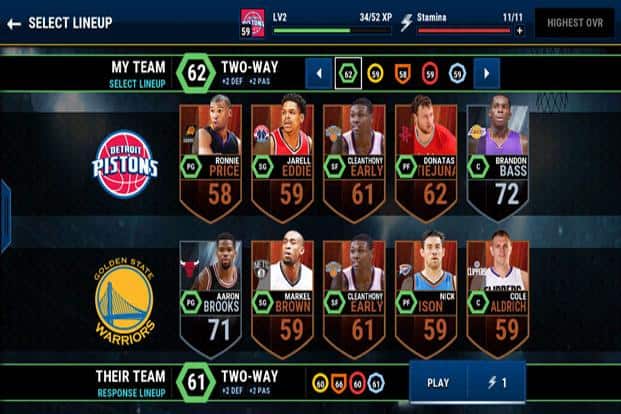 The game follows the same build-the-team model we saw in FIFA 15 Ultimate Team. You can build your own team with the players you want, provided you have the resources to pay for them. This is where you can speed up things by spending real money and getting coins to buy the players you actually want. For users who are not very familiar with the NBA players and teams, the player ratings and details on the strengths and weaknesses of a player will help decide which players are more important. The game also shows sticker boxes with some hints and tricks to handle controls to your advantage.

Whether you find it tough to play depends on your team and your opponents’ strengths and weaknesses. The in-game controls feel very intuitive and easy to handle, which is a rarity in mobile games.

The game menu looks similar to EA Sports’ UFC game, but with the hidden menu bar, you can keep track of your next match, the entire season, leagues, auction window, your team and visit the store.

Even if you are not a basketball fan, this game is a perfect time killer and you will love to enjoy it after a while. The fact that you can actually build your own team rather than being stuck with one team is something that makes EA Sports’ new games really addictive. Just make sure, you have a stable WiFi connection to play it without interruption.