Home / Mint-lounge / Birth of a notion

Birth of a notion

Birth of a notion

There is a tropical storm warning in effect for St Lucia, an announcement which dampens my plans for a “lime" with friends at the weekly Friday night street party in Gros Islet, a cornucopia of food, people and music. The change in plans, however, gives me a chance to brush up on my St Lucia trivia.

St Lucia is one of the Caribbean’s Windward Islands. Its historical moniker was “Helen of the West", because the island, populated primarily by people of African origin, changed hands between the British and French empires 14 times, gaining a unique cultural stamp in the process. Its contemporary fame is attributed to a stunning defiance of statistical probability: The island has produced two Nobel laureates—Derek Walcott for literature, and the late Sir Arthur Lewis for economics. There is also the “pre-packaged" side of St Lucia, of Sandals and similar resorts with their bubblegum colour palettes and promises of instant romance. There is the Rodney Bay Marina of travel brochures with its mega-yachts and the glow of the entertainment district across the bay. Somewhere in between is the truth. Of shore and shoal: The Castries harbour

The drive from the airport along the east coast and across the Barre de L’Isle mountains to the island’s capital on the west coast is long and winding, but perhaps the one that best tells the story of Tomas. It starts with the dry grasslands of Vieux Fort and the drama of the Atlantic Coast, and slowly ascends through a series of mountain ranges. It seems as though a giant straddled the island and clawed at the landscape. The island’s rainforest has done its best to reclaim the scars of exposed red clay, but there are places on the drive that reveal that St Lucia is still a developing nation—the gouged-out bits of road demarcated by rickety wooden barriers and promises of work in progress that have either stalled or never began.

Castries, the capital city, is hot, congested and a little down in the mouth, but still charming. In the Central Market, vendors chatter in Kweyol, a French patois. St Lucia is officially English-speaking, but the island’s mixed heritage finds expression in the cadence of Kweyol. In the market, I find some late-season mangoes, and sample a bit of bake (fried bread) and saltfish, the breakfast favourite of locals. 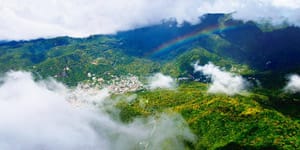 The mountains of Soufriere in the north. (Thinkstock )

The cathedral showcases the murals of artist Sir Dunstan St Omer, which depict a black Madonna, Joseph, and Christ, an assertion of Caribbean Christian identity which was revolutionary for its time. The murals go largely unremarked now and there are elderly women tending the altar with flowers and replacing the devotion candles. Basilica of the Immaculate Conception. (Photographs by Katherine Atkinson)

For a day of rumination after the bustle of Castries, I visit Pigeon Island, now joined to the mainland by a causeway, and once the stronghold of English admiral George Rodney. Now a national park, the promontory houses some fascinating ruins. The hike to the armoury and fortress is a little daunting, but worth it. The vista there is of Rodney Bay, an expansive crescent stretch that is home to several beaches, a stretch of restaurants, the Gros Islet fishing village and the mouth of the Rodney Bay Marina (Rodney, it seems, left an indelible mark on the island).

Jambe de Bois is a restaurant on the water’s edge, named after the pirate who is reported to have once stored his booty there. It is as rustic as a beachfront restaurant might be expected to be, but with a good menu, fresh local juices such as lime and golden apple (not actually an apple at all, but another fruit, astringent and refreshing). Its deck is a good place to pass a lazy afternoon writing postcards. The Pitons appear sudden and majestic after more than an hour of wending over hill and dale. The peaks are thought to be the plugs of a now-eroded volcano; and the odorous and fascinating Sulphur Springs are what keep the pressure from mounting to eruption. The mud silt in the run-off from the springs claims healing properties, and so, in spite of the heat from overhead and underground, I shimmy tentatively into the hot baths and liberally apply the mud to my skin. Louis XVI once created a restorative spa for convalescing troops here, according to Joan Devaux, owner of the Diamond Falls Botanical Gardens and Baths. When I rinse the mud from my skin I notice an immediate improvement in complexion.

After a plate of local fare from one of the many cafeteria-type restaurants in town, I head to Malgretoute, a beach that has for a sentry Petit Piton, and idle deliciously, snorkelling and sunning, until the light begins to wane. I scramble to head up to Ladera Resort for a sundowner. The resort sits along the ridge between the Pitons and affords the view which inspired the poet laureate Walcott. I sink into my chair, sip my cocktail and sigh contentedly. St Lucia is brochure-worthy and so much more!