Is all literature travel literature? In “The Quest Hero", W.H. Auden’s classic essay about The Lord of the Rings, Auden tells us that it is impossible for “a history-making creature" like man to express his existence in a single image. We can never live only in the present. And when we look at our future, Auden says, “the natural image is of a road stretching ahead into unexplored country", while our past is a city “which is built in every style of architecture and in which the physically dead are as active citizens as the living".

We experience our own life stories as giant travel narratives, full of roads and cities. We are always going somewhere else in order to know ourselves better. Auden thinks that this is also why the quest story—the classic tale of the hero setting out on a journey, accomplishing an arduous task and returning home—remains one of the most popular ideas in Western literature. 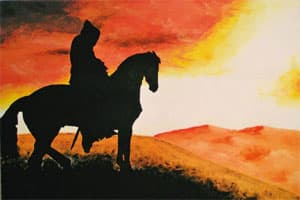 Such a long journey: an illustration from The Lord of the Rings. Photo: The Artifex from Flickr/Wikimedia Commons

The ancient Greeks loved quests: It takes Odysseus 10 years to circle back home from Troy. Medieval Frenchmen loved quests: The Holy Grail was the billion-dollar IPO of the Middle Ages. J.R.R. Tolkien, the subject of Auden’s classic essay, came back from World War I to write The Lord of the Rings, a fantasy about sacrifice and redemption couched in the language of the quest narrative.

The narrative may change from era to era, but the signposts have remained the same all along. Here’s a short guide on what to expect on an epic journey:

Campbell’s mythical archetypes always have a hero, and rarely a heroine. Campbell thought that since women have been historically considered keepers of wisdom and the ultimate creators, it was relatively rare to find girls setting out on perilous journeys to find things they could probably already make at home. Heroes have classically been men who were the best at whatever they did, like Hercules, because they had what it took to win against the implacable fates. The unlikely hero—the ordinary man who starts out with few apparent talents but wins the day with his secret reserves of courage and faith—is a figure rooted in Christian spirituality, barely a couple of millennia old. Those setting out on quests should take one of them along to win tournaments, and the other to beat the odds.

“To look for a lost collar button is not a true quest," Auden declared. Quests end in objects which make the journey worth it: the cup of gold, the elixir of life, the sword which cannot be defeated. Quests have also played out on the pages of European history as grand and terrible adventures of commerce, finding new continents, new supplies and new markets. It’s no surprise that the myth of the Golden Fleece may have taken root in the old quest of Greek mariners for amber.

A quest needs companions. They will sometimes take a bullet for the hero (here’s looking at Odysseus, asking the Cyclops to eat him last), sometimes pick him up when he stumbles, and sometimes make jokes when the mood gets too heavy. A central figure in the quest is the wise old lady (sometimes) or wise old man (almost always), who holds the key to vital knowledge for the hero to progress, and can be something of a father figure to the untested young traveller. Young readers everywhere will know this type at its best, thanks to Headmaster Albus Dumbledore from the Harry Potter series (the most Campbell-esque of Campbell pastiches). But Potter fans would do well to remember that substitute fathers can be complicated characters, and rarely survive the quest to fulfilment. Sorry about that, Professor Snape.

Harry Potter is a wonderful departure from tradition as far as its know-it-all buddy character, Hermione Granger, goes. Had Harry Potter been written some centuries earlier, Hermione would have been a dangerous witch, leading the innocent heroes into peril by unearthing forbidden knowledge for them.

Wait, that’s actually what she is in the books. Yet smart temptresses have not always been crowd favourites. Indeed, they often represented a diversion from the course of true knowledge for the intrepid quester: Think of the Aeneid’s Dido, queen of Carthage, the ruler of a great and complex civilization whose love detains Aeneas on the coast of Africa, putting a spoke in the wheel of fate. His destiny is to found Rome; hers, to die of heartbreak.

Women represent stillness in the continuous movement of the quest. Whether they are spiders trapping heroes in their webs of deceit, like the nymph Calypso in the Odyssey, or faithful lovers holding down the fort waiting for the heroes, like Odysseus’ queen Penelope, they have, symbolically, been antithetical to the passion of discovery. That historical baggage, ultimately, is why J.K. Rowling’s series is called Harry Potter and not “Hermione Granger".

In search of the Holy Grail. Photo: Edward Dodwell/Wikimedia Commons

In his poem Ulysses, Alfred Tennyson writes of Odysseus as the restless explorer, bored with home, eager for new adventures on the high seas. Dante, in the Inferno, imagines something similar. But the Odyssey itself, is fundamentally a story about the loss of home, and the good fortune of rediscovering it. Scholars of the Odyssey tell us that some of its component parts are actually early Greek ballads called nostoi, or “returns"—stories of voyages and homecoming. Quest stories like the search for the Holy Grail, made this homecoming more complex. No one was expected to return once they had found the sacred object; but the promise of heaven is another kind of homecoming altogether.

Modern narratives of return are even more tenuous. A shell-shocked Tolkien did not end The Lord of the Rings with the destruction of the magical object in question, but with a disastrous homecoming for the heroes of the Ring War, to a homeland overwhelmed by industrialization and forced labour. In an age of mass exile, with migration and displacement becoming standard conditions for humanity, the Odysseus of the 20th century spoke not in the voice of Homer, but of C.P. Cavafy, whose famous poem Ithaca declares, “Ithaca has given you the beautiful voyage./Without her you would have never set out on the road./She has nothing more to give you."

We love the quest story, Auden says, because it is the guidebook of our imagination. Here, the roads of the future and the cities of the past meet to create the topography of our present. Sometimes, we read and write for the same reason that we travel: not to know what happens next, but to understand what is happening to us now.