Rivalry that defined an era

Rivalry that defined an era

A good tennis rivalry that has spanned many years is usually known by a few great matches. John McEnroe and Bjorn Borg’s legendary rivalry—known by many as the first enduring one in men’s tennis in the Open era—is characterized largely by the 1980 and 1981 Wimbledon finals and the 1981 US Open final. While Borg won the former, McEnroe won the latter two.

Seen through the perspective of the 1981 US Open, Stephen Tignor’s High Strung takes an objective look at an era that strived to create an identity of its own, away from the period of amateur tennis that ended in 1967. Though High Strung might appear to focus on McEnroe, Borg and their rivalry, in reality the book is more about an era than just the rivalry. 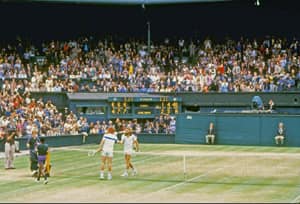 Trendsetters: John McEnroe (left) and Bjorn Borg were part of a group that popularized tennis post the period of amateurism.

High Strung goes beyond what newspapers have reported or what has been seen on TV, particularly when writing about the relatively reclusive Borg. For instance, Borg’s friendship with Vitas Gerulaitis began a day after Gerulaitis lost to Borg in a heartbreaking 1977 Wimbledon semi-final. The two later became the best of friends though Borg never lost to Gerulaitis in their 16 meetings. Tignor writes that Borg could never get used to the changes in the game, more particularly its commercialization, the heart of which seemed to be the US Open where tennis matches were being held under evening lights and in night sessions. Commercialization brought in matches that fetched huge sums of money and no ranking points (also called exhibition matches); a lure that Borg succumbed to and paid the price for—he retired at the age of 25 after a bitter loss to McEnroe in the 1981 finals of the US Open, a title he never won.

Also See The Long and Short Of It (PDF)

Yet it seems inconceivable that the ice-cool Borg, who would be revered in his professional years by countless fans worldwide, was as temperamental in his formative years as his famous opponent. Tignor calls him “a habitual cheater and screamer who smashed dozens of rackets". Similarly, High Strung attempts to go beneath the McEnroe persona to find reason behind his temper tantrums on court. The book quotes his biographer Richard Evans as saying that “as preposterous as it may have sounded on the surface", Superbrat (McEnroe) was “at heart the true amateur sportsman".

As a junior, McEnroe was known to make line calls against himself, and had an ingrained aversion to phoniness of all sort (he refused to keep an assistant to carry his rackets, do his bidding and so on), which translated into a hatred for cheats on a tennis court.

Of course, some of that hatred came out in infamous temperamental rants. During one of his semi-finals, in which McEnroe was given yet another public warning, Diana Spencer, then engaged to Prince Charles, was quietly ushered out of the royal box, leading one journalist to say: “The wedding’s off; her ears are no longer virgin."

In a doubles match against the Indian brothers Vijay and Anand Amritraj, McEnroe wondered out loud whether the linesman in a turban was “biased".

Though High Strung becomes a drag in the middle, especially when it chronicles the advent of tennis in the US, those interested in the history of US tennis will lap it up. It provides a detailed look at how tennis evolved at the same time, the gentleman’s game becoming the breeding ground of ever-increasing financial incentives. This was the time companies such as International Management Group (IMG), Coca-Cola and Nike made inroads into the sport, the last mentioned throwing up commercials that showed their tennis shoe underneath the headlines McEnroe swears by them and McEnroe’s favourite four-letter word.

Tignor’s work is nevertheless well-written, a true attempt at exploring players’ behaviour, their attitudes, their struggles and achievements.