LeEco, known as LeTv until recently, isn’t a typical Chinese phone brand. It has a more diverse portfolio of products and services such as an electric cycle, Bluetooth headset, virtual reality glasses, and an online video streaming service, which incidentally is very popular within China. LeEco LeMax is one of their first smartphones in India. Priced at ₹ 32,999, this smartphone faces stiff competition from the Motorola Moto X Style ( ₹ 28,999). Design: Classy but too big and bulky

LeEco leMax comes with a solid metallic casing. The phone doesn’t feel very handy. This smartphone weighs 204g and is 8.9mm thick, which makes it unmanageable for users with smaller hands, however, one can’t deny that it is one of the best-looking smartphones in the mid-range segment. The finger print has been placed at the back and sits right in the middle so one can access it without shifting it in the hand. It is accurate and easy to configure and provides an extra layer of security to the user. The phone is one of the few to use USB type C standard, freeing users from the hassle of getting the right side up before plugging in as is the case in most micro USB-based phones. The phone’s closest rival, the Moto X Style, has a smaller display (5.7 inches) but weighs 178g. The Moto X Style looks equally stylish and feels a lot better in the hand. 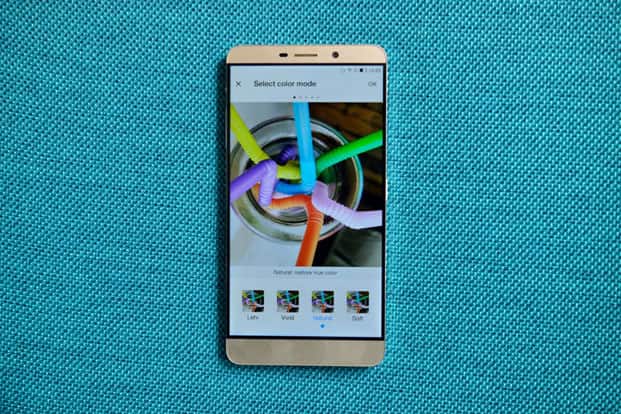 Display: Comes with a huge one

The LeMax’s 6.3-inch display has a screen resolution of 2560x1440pixels. If you like watching movies and playing games on a smartphone, the sheer size of the display is enough to delight you. Text looks crisp, pictures sharper and colours richer. Even though there isn’t enough 2K content available right now, the available HD videos and games look brilliant. The best part is that you can alter the colour intensity of the screen. If you want a more natural white look, there is the Natural option. The Vivid mode makes the screen brighter and the Soft mode gives it a warmer but slightly yellowish tint. However, it smudges a lot and is not easily legible under bright light due to its reflective nature.

The Moto X Style’s AMOLED display looks sharper and more vivid of the two and offers similar screen resolution as the LeMax. The smartphone runs on Android 5.0 (Lollipop) with LeEco’s own custom interface, which looks a bit like Gionee’s Amigo interface. It is a full-fledged interface with some interesting customisations such as app permissions, the option to change colour intensity and nice looking themes. Though it looks good, it is bit complicated to use. Also, the lack of Android Marshmallow means users will miss out on features like Now on tap (a context-based search that shows more options) and better battery management. The Moto X Style has an advantage over it as it runs the latest Android (Marshmallow) and, given Motorola’s penchant for Google updates, is likely to get future updates early. The stock Android interface looks a bit plain but is easy to use. The smartphone runs on Qualcomm’s 64-bit Snapdragon 810 octa-core processor, which is quite notorious for its heating issues. However, LeEco has used an under-clocked version (2.0GHz) of it that doesn’t heat up while playing games or using the camera. Paired with 4GB RAM, the processor is one of the most powerful ones and was able to handle the heavy custom interface with more than 10 apps and games such as FIFA 16, without any signs of slowing down or heating up on the back. It offers 64GB of internal storage, which is impressive as the only other smartphone that offers that much storage in this range is the OnePlus 2. The Moto X Style offers 32GB of storage and runs on Qualcomm’s 64-bit Snapdragon 808 processor with 3GB of RAM. It is quite powerful itself and handles most tasks with the same ease as the LeMax. The LeMax comes with a 21-megapixel camera with optical image stabilisation and touch to focus. The lens is slightly protruded so when you put it down, the phone rests on the lens which can pick scratches easily. It handles colours well, especially in dark areas. Colours looked a bit washed out and the sky a bit over exposed, but by and large shots taken during daytime looked rich and detailed, allowing one to zoom in and crop the images easily. The low light shots in yellow light looked more colourful and sharper than those taken in white light. The Moto X Style also comes with a 21-megapixel camera but with auto-focus which can be extremely frustrating and slow to use at times. While it captures details and colours brilliantly, it struggles in low light.

The smartphone is powered by a 3,400mAh battery which lasts just over a day at most if you keep the screen brightness low. The Moto X Style has slightly smaller (3,000mAh) battery but is pretty much at par with it in terms of battery back-up.

The biggest highlight of the LeEco LeMax is its mammoth screen size. It is ideal for users who find even a 5.5-inch screen small. But, if you can manage with a smaller display, the Moto X Style is a much better device on account of the clutter-free user interface, assured Google updates and better design.