Rajesh Mapuskar | ‘Only a Parsi came to mind’

Rajesh Mapuskar— Mapuskar, Mapu or Maps—tried his hand at many careers when he moved to Mumbai in 1983: modelling, assistant direction on Marathi soaps, production for advertising films and assisting on movies like the Munna Bhai series and 3 Idiots, before he wrote and directed his first film, Ferrari Ki Sawaari, which released on Friday. “I am a doer. Give me anything to do and even though I am saying it myself, I will do it well," he says.

Mapuskar, 43, who grew up in Shrivardhan village, Raigad district, Maharashtra, is totally at ease poking fun at himself and nonchalantly dismisses questions about having been babied during the making of Ferrari Ki Sawaari by Rajkumar Hirani and Vidhu Vinod Chopra. Edited excerpts from an interview:

How did you get the idea of making a film around Sachin Tendulkar’s Ferrari? 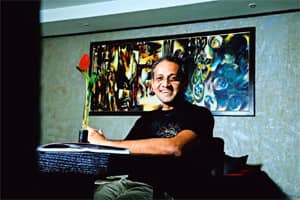 Later, I bounced the idea of a man stealing a Ferrari for a day to Raju (Hirani), who said develop it further. Over time the story became about Sachin Tendulkar’s Ferrari rather than just any car. Around that time I noticed how crazy Vinod’s son Agni was about cricket and I thought of including a boy who was cricket crazy in this story about a Ferrari (the car used in the film is the Ferrari originally owned by Tendulkar).

Who contributed more to your film—your co-story writer Hirani or your co-screenplay writer Chopra?

It is tough to say who contributed more to it. Ideating with both was like throwing dough at each other—all three of us gave it the shape we wanted and then threw it back at each other for more inputs. But yes, Raju and I have been friends for 22 years, and we look at life similarly. Most of my thought processes match the way Raju thinks.

Are you worried that everyone will say this is a Hirani film?

No. I never had this thought and even if people say it, that’s fine.

What was the learning from working with Chopra on the screenplay?

How to write a scene that is really tight on paper. He said if you want to make a scene 5 minutes long on screen, then write only two pages of dialogues, which means 2 minutes. Use the remaining time for the treatment of the scene. The tighter the scenes, the faster a film moves and the less time the audience has to think.

Sharman wanted to audition for the role right after he heard the script during the filming of 3 Idiots. I thought he looked too young for it, even though he is a father in real life and his daughter is around eight years old. At the time he had lost a lot of weight to play a college boy. To convince me, he put on weight, thickened his eyebrows and spoke with a Parsi accent.

Why a Parsi family setting?

I come from a small village in Raigad district but for holidays, I was sent to Mumbai to stay with an aunt who lived in Dadar Parsi colony. I got acquainted with their music, their furniture and their way of living. For me, they were like foreigners who spoke Gujarati and that fascinated me. When I was thinking about the car thief, I asked myself who would be so careful with a vehicle that was not their own—and only a Parsi came to mind. I love music and even before the script was decided, I had decided what kind of background music I wanted. I like the sound of the accordion and the harmonica, and those were going to be the instruments used. I couldn’t relate this music to a Maharashtrian or Punjabi family set-up. It blends well with Parsis.

Why are you reluctant to direct the third instalment of ‘Munna Bhai’?

The vision of Munna Bhai and its characters is Raju’s. At best, I am like a chacha (uncle). Sure, I love the film and the characters, but I am not as close to them as Raju is.

Is there an autobiographical element to the film?

Well, yes. A lot of things that you see in Rusy’s character (Joshi) are similar to my father and my relationship with him. The simplicity, lack of inhibition, honesty—that’s my father.

Seven-and-a-half years to write the first script…. Hope you have the second one going.

Yes…but it’s raw. And it will be about music. Maybe I will make a documentary on music next and then a film. Or maybe make a musical.

Is this an exciting time to work in Hindi cinema?

Of course. Imagine a line producer getting a chance to direct a film about a father, his son, cricket and a Ferrari with Vinod Chopra productions. It would not have been possible seven years ago. You know, I narrated this story to two producers between the filming of the two Munna Bhais and after listening to the story, both asked: “Aur kuch hai kya (is there anything else)?" I hope they see the film now.