Somewhere in a large room of the National Gallery of Modern Art (NGMA) in New Delhi, among bamboos and skulls, colourful saris and rotating mirrors, is a tribute to Mata Amritanandamayi Devi, or Amma as the “hugging saint" is known to her followers. 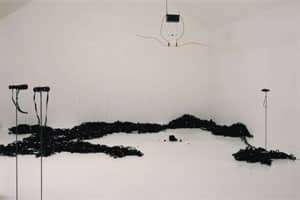 ‘Time Goes By’ by Rebecca Horn.

Co-hosted by The Institute for Foreign Cultural Relations and the Union ministry of culture, the exhibition opened to the public on 8 April and is part of the “Germany and India 2011-2012: Infinite Opportunities" cultural exchange.

It spans the 40-year career of Horn—regarded as one of the most versatile German artists alive—including videos of early performance works, drawings, photographs, kinetic sculptures and installations, and cinema.

Horn is a fiesty vision at 68. Priyanka Parashar

Her obsession with kinetics is revealed in installations such as Octavio Paz (renamed In the Light of India for this exhibition). Evoking Marcel Duchamp’s Readymades, this is a book of Paz’ poetry on display. Horn adds to it an iridescent metallic butterfly perched on a jar of blue powder. Its wings flap mechanically. In another new installation, Crickets Song (2011), a brass cricket moves up and down a piece of volcanic rock. Both offer a unique proposition: nature on steroids.

An early taker of the “multimedia artist" tag, Horn has also directed full-length feature films, for which the NGMA has set up partitioned viewing booths. Buster’s Bedroom (1991), for instance, is a comedy starring Donald Sutherland and Geraldine Chaplin, about a girl obsessed with Keaton who chooses to stay in the sanatorium where the actor was once a patient. Given Horn’s evident fascination with the actor, that girl could well have been her.

For Indian audiences, this substantial exhibition from the NGMA comes close on the heels of Japanese artist Yoko Ono’s first exhibition in India in January, at the Vadehra Art Gallery in New Delhi. Both artists started their art practice around the 1960s-70s. Both have a strong focus on performance art and the use of sound in their installations. But more importantly, the centrepiece of Ono’s exhibition was also a large-scale installation dedicated to Indian women. In Passage Through Light, Horn takes this dedication a notch ahead, and picks a favourite. Passage Through Light will run till 20 May at the NGMA, New Delhi.