It is strangely fitting to see Lakshmi Holmström, one of the greatest translators of Tamil literature, in her adopted place of residence—the very English, very bucolic literary city of Norwich, where she is evidently at home, elegant in her salwar-kameez.

The award-winning translator of short stories, novels and poetry by Tamil language writers has given us such contemporary giants as Ambai and Sri Lankan poet Cheran; classical greats such as 12th century poet Kambar. Holmström most recently published Fish in a Dwindling Lake (2012), a translation of short stories by Ambai; A Second Sunrise (2012), poems by Cheran translated and edited with Sascha Ebeling; and Salma’s The Hour Past Midnight (2009). 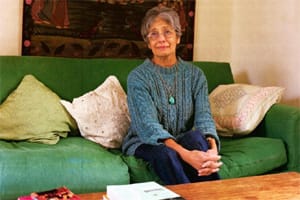 What is it like to work with an author who is present in the act of translation?

The theory provides the rigour and the critical discipline which you need to have. But the actual practice of translation throws up particular challenges. It’s nice when the writer is there; then you can refer to them for textual problems. Salma was wonderful to work with because her world (a small-town, Muslim woman’s world) was completely new to me. She uses a vocabulary that was not easily understood by standard Tamil speakers. It’s a splendid first novel.

I would sit her down and make her take me through a number of words, concepts to do with workshops, prayer, Muslim festivals, practices, family ideas and notions. I couldn’t have entered that world without that interaction. You need, when you’re translating, to be precise about words.

What does a translator bring to the work?

You bring your interpretation, but you also have to make your work stand up on its own. It should. If it doesn’t, it fails. It is competent, but it doesn’t have a life of its own. It always takes on its own life.

What are you working on at the moment?

I’m working on an English edition of Cheran’s poems which Navayana brought out. It’s a slightly different edition, and dual language, which is wonderful.

I’m also working on a collection consisting of work by Kutti Revathi, Salma, Malathi Maithri and Sukirtharani. They’re all women writers and the book is being published by Sangam House and a group of small publishers.

Who are some of the translators you admire?

Gita Krishnankutty is excellent and (A.K.) Ramanujan did some fantastic translations, not only from the classics, and in Kannada. In Tamil, we’ve had Vasantha Surya, Subhashree Krishnaswamy, Malini Seshadri. I’ve been looking at The Oxford India Anthology of Tamil Dalit Writing, which Oxford University Press (OUP) brought out this year.

How do you deal with the publishing market and its trends?

Some publishers will market extensively. For example, the two books by Bama, Sangati and Karukku, have done well internationally. It has quite a lot to do with the publishers, and also with the ways these books have had a particular readership: People wanted to learn about Dalit writing. Part of this is Dalit writing by women—a particular kind of feminism. Universities use translated works a lot now, and that has also helped.

There is support, people are aware that translations are widely available, and that there are awards which make these books visible. (Salma’s The Hour Past Midnight was longlisted for the $50,000, around ₹ 25 lakh, DSC Prize for South Asian Literature, 2011.)