As the global brand ambassador for one of the world’s leading alcohol companies, Chivas Regal’s Max Warner has picked up more than just a trick or two about spirits. While attending the Delhi edition (from 18-20 December) of Chivas Studio, a global luxury do that brings together creative expressions such as photography, sculpture, jewel craft, fashion, music and mixology all under one roof, Warner shared a few facts about cocktails. “They originated to mask the flavour of the bitter whiskies and vodkas of olden times and also to have a drink secretly, wherever it was not permitted," he says.

Over the years, Warner has picked interesting trivia on how alcohol is served the world over. “In the UK people like their spirits heavy and we serve them along with a glass of water because we don’t want them to get knocked out while they are having a stiff one," he says.

A chef by training, Warner, who has also done a course in bartending, can comfortably blend the two experiences into the drink he’s making. He says the best way to get the oil out of the lemon rind is by either putting the lemon in warm water or rolling it a few times on a flat surface. “Even something as simple as rubbing an orange peel on the rim of the martini glass can make all the difference, especially in a fruit-flavoured cocktail." 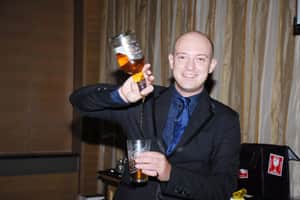 Having had a global presence in New York, Madrid, London, Hong Kong and Sydney, the event launched in India in Bangalore last month. Chivas Studio will collaborate with artists such as Prabuddha Dasgupta for photography; K.S. Radhakrishnan for sculpture; Aman and Ayaan Ali Khan featuring Gino Banks and The Maske Trio from Australia for music; Manish Malhotra, Wendell Rodricks, Anamika Khanna, Malini Ramani, Surily Goel, Rohit Bal, Gauri and Nainika and JJ Valaya for fashion. The event will be held at the Grand Hyatt, Mumbai, from 8-10 January and in Kolkata on 16-17 January. Entry by invitation only.