Victor Mallet: The Ganga has pollution problems but it is not a dead river

Journalist and author Victor Mallet speaks to Lounge about why, despite the odds, he is optimistic about the Ganga's future

Victor Mallet says he is a river boy. When he lived in London as a young child, his mother warned him not to fall into the river that flowed through the city. “If you fall into the Thames you will have to go to hospital. You will have to get your stomach pumped because the water is so poisonous and polluted," she used to say. It was. In the early 1960s, the Thames became a cesspool of toxic waste, sewage and industrial effluent, following the Great Stink of 1858, when a hot summer caused a foul smell to emanate from the river choked with sewage.

Today, one of England’s longest rivers is full of fish and seals and the occasional stray whale wanders upstream once in a while. Its dramatic transformation gives Mallet, the author of a fascinating new book, River Of Life, River Of Death: The Ganges And India’s Future, hope that India’s heavily polluted Ganga can be saved too.

The book draws on research conducted during Mallet’s four years in India, when he served as South Asia bureau chief for the Financial Times. He is currently Asia news editor for the newspaper, based in Hong Kong. 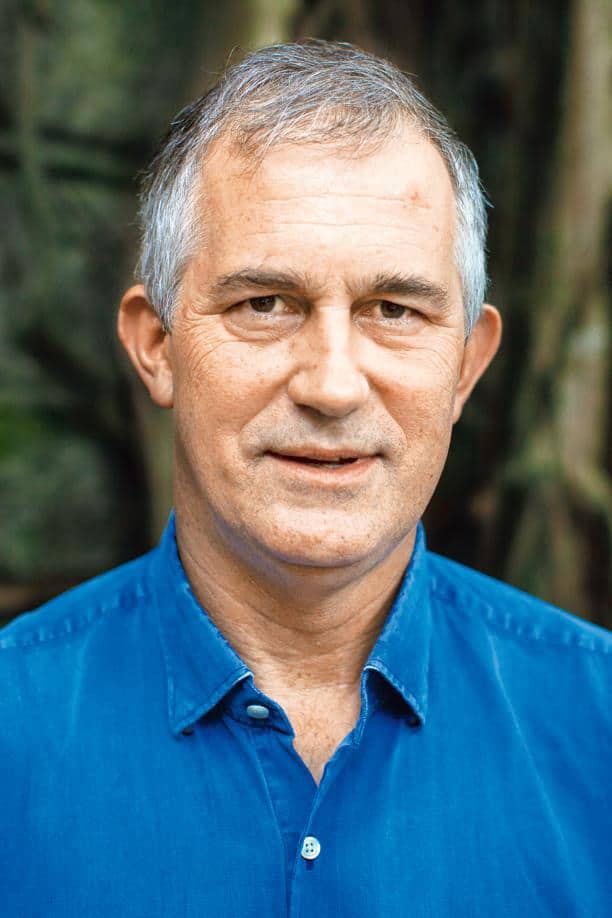 He spoke to Lounge about why, despite the grave odds, he is optimistic about the Ganga’s future. Edited excerpts:

The Ganga, as you describe it in your book, is a metaphor for the country it runs through. How so?

It may be a metaphor for how difficult it is to govern India, how difficult it is to get things done. We’ve seen successive governments from Rajiv Gandhi onwards talking about saving the Ganga. They had the Ganga Action Plan I and II, we had the Yamuna Action Plan I, II and III, and then (Narendra) Modi came. I watched him in 2014 in Banaras (Varanasi), talking about how important it was to save the Ganga.

Again, after he was elected, he stood on ramparts of the Red Fort and his enemies thought he would talk about Hindu nationalism and he didn’t—he talked about sanitation, he talked about women’s rights. This was remarkable and I admired him for that.

The problem now is how much is actually being done. Saving the river is one, but there are other things he raised that also have not been done.

Even some of Modi’s strongest supporters are disappointed that he has not done more. Let’s face it, he’s not the first Indian prime minister who hasn’t been able to achieve what he or she wanted to achieve. In a way, that’s the point, it is very hard to get things done in India if you are the Central government.

Partly that’s because of state governments being corrupt and inefficient, which they definitely are. And, this is a really important issue for India—there is no power lying with municipalities. Most problems for most people need to be solved at the local level. Sanitation is a classic example of that. Pollution control is another. This is something that has to be done at the level of a house, factory or an institution or a street.

Choking it with garbage is only one of the threats, and perhaps the most obvious, to the Ganga. Which among the others is the most alarming? 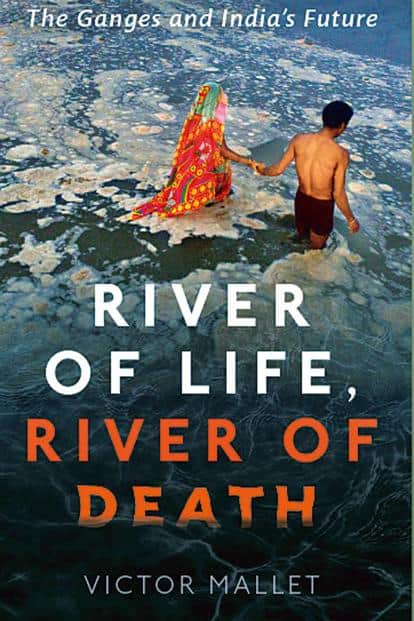 The cover of Victor Mallet’s book.

The most difficult challenge is sanitation because the biggest problem for most of the Ganga river system is human-waste pollution. It’s sewage. It’s not dead bodies. There are industrial pollution problems in certain areas but the biggest, basic problem and the one that will take the longest to solve is essentially to do with sewage treatment and sanitation.

There is one other problem that we should emphasize. It’s not just what you put into the river, it’s what you take out of the river. A lot of the religious people, the devout Hindus that I met along the river who are interested in saving the Ganga, are very focused on this issue—the natural flow of the river has been impeded by too many dams.

In the dry season, most of the dams take 90% of the water that flows down the river and divert it for agriculture and a little bit for cities. Nobody is saying it should be reversed but clearly, there is a problem: As you get more and more people and as agriculture becomes more and more intensive, there is simply a limit to the amount of water you can take out of the river.

On the one hand, Indians revere the Ganga. Yet, the same people who worship her are surprisingly comfortable with the horrifying pollution. There’s a double standard here.

I don’t think this is people being deliberately hypocritical. To be fair, it’s almost like a mental block. A lot of people you speak to will say: We cannot sully the Ganga, we cannot pollute the river because she is a pure and purifying goddess. And at this point, the person will throw a plastic bag full of garbage into the river!

Obviously, from a scientific point of view, but even from a religious or Hindu point of view, this is nonsense. Several Hindu academics and even gurus whom I quote are saying: This is wrong. The reason this is wrong, the way I have interpreted this, is that rivers have spiritual powers.

Because they are life-givers…

Exactly, my argument and the argument of all sensible people, whether they are scientific or religious people, is that the reason rivers have this spiritual force, the reason they are divine, is precisely because they are life-givers. They give water that we depend on to live, they give fertility to the soil that we also depend on. They give us food and water.

The problem is, when you kill them, they lose those life-giving qualities. Obviously, if you poison the river, you can’t drink the water, or if you drink the water, it will make you sick. And if you take all the water out for a dam, there is no water left downstream. So, if you kill a river you destroy the very qualities that made the river holy in the first place. In other words, the spiritual force of the Ganga depends on her physical attributes of giving life and if you take away the life-giving qualities, you take away the divinity. This is what people need to understand.

One of the people I quote is an environmental scientist in Varanasi. He said, it was the 1970s and he was bathing in the river with his mother and there was a dead cow and lots of pollution. He said, I am going to start measuring the pollution. He was at Banaras Hindu University. His mother was outraged. She said, how can you say this, you are suggesting the Ganga is impure! He said, not really, I am just suggesting there is pollution here which is a problem. She said, you are not a good Hindu any more!

The benefit of people worshipping the river is that it should be easy to motivate people to save the river.

It is good for multiple reasons. If you save the river, of course you save the river for spiritual reasons, you also save the lives of hundreds of children who die from poor water quality, from stupid preventable diseases, and you create thousands and thousands of jobs for people who need those jobs in building the municipal works that are required for sanitation, and you save the environment.

Then why isn’t there more popular support for it? New faces are not getting involved, India’s youth is not coming forward to save the Ganga. Why is this not a priority?

I don’t think that’s quite fair but it is true that there are too few people who see this as a fundamental issue. You often find that in developing countries. In countries that are poor but getting richer, the environment is shunted aside. After all, this happened in the West, it happened in Japan, it happened in China. It is not unique to India.

There is this kind of notion that we will get rich first and we will worry about the environment later. This is a very common view. There is a tendency to say, you Westerners, you screwed up your countries and then you saved the environment and you want us not to get rich. You are going to make us spend a lot of money saving the environment for your own weird, green liberal purposes.

But of all the countries I have been in, India is the least resentful of people being involved in environmental progress and that’s because Indians have a very special relationship with the land.

Above all—and this is very, very important—India, despite being incredibly densely populated, is still something of a paradise for wildlife. Much more than you might expect, and much more than China. There is a fundamental respect for other forms of life, other species. That definitely does not exist in China, not in a widespread manner in any case.

You’ve chosen to tell the story of the Ganga through several characters you met on your journey—a ‘chaiwalla’, a ‘swami’, environmentalists, scientists, your tour guide. Who did you have the most memorable encounter with?

There is a guy called Rakesh Jaiswal who is an environmental campaigner in Kanpur and he’s been campaigning for decades to help the tanneries clean up their effluent. He has a small NGO called Eco Friends. He has tried again and again, year after year, to ensure that these tanneries are not putting this extremely dangerous toxic waste into the rivers.

A classic example would be the 400 or so tanneries in Kanpur that are supposed to do primary treatment themselves—some of them don’t, some of them do. The water then gets pumped to this common treatment plant that has been financed by foreign donors and by the tanneries themselves. This common treatment plant treats all the waste, so what goes into the Ganga is waste but not dangerous wastewater.

I spoke to Jaiswal just before the book was printed; he was in a very depressed mood and he said, I have given up hope—nothing has happened since Modi came to office. Not one drop of sewage has been diverted.

Here is a guy who has dedicated his life to doing his bit and, again, it comes back to this issue of how difficult it is to achieve things in India. It just makes it very, very hard to do the right thing even when you have the motivation to do it and even when the money is available.

Yet you remain optimistic?

I try not to be too despairing. Because you look at examples of other rivers around the world and the really important thing to remember is the Ganga is not a dead river. It has pollution problems, but it is not dead. There is wildlife. You can see freshwater dolphins, you can see gharials, freshwater crocodiles. It’s not like the Thames in London which was really dead.

When you clean a river, you don’t have to scrub it, all you have to do is stop doing what you are doing, which is polluting it. So you stop putting things in and the river flow will clean itself in one day. No one is saying it’s easy because obviously these things take time, but it is not impossible. It’s doable. That’s why I try to be optimistic.