What is the Nokia Morph about?

Nokia Morph is a joint nanotechnology concept, developed by Nokia Research Center (NRC) and the University of Cambridge (UK). The Morph demonstrates how future mobile devices might be stretchable and flexible, allowing the user to transform their mobile devices into radically different shapes. It demonstrates the ultimate functionality that nanotechnology might be capable of delivering: flexible materials, transparent electronics and self-cleaning surfaces. 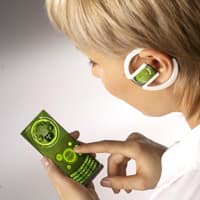 This device concept showcases some revolutionary leaps in technology that will open up an entirely new spectrum of possibilities. We believe nanotechnology could provide enhanced usability, and enable far more intelligent devices. Consumers will want this because it adapts to the context of the user, is easy to use and transformable (such as wrapping it around the wrist). It will give us a new kind of connectivity to our surroundings, allowing us to connect in ways never thought of before through our mobile devices and so will give us new types of services like never before

Some of its highlights will be:

• Flexible & Changing Design: Nanotechnology enables materials and components that are flexible, stretchable, transparent and remarkably strong. Fibril proteins are woven into a three dimensional mesh that reinforces thin elastic structures. Using the same principle behind spider silk, this elasticity enables the device to literally change shapes and configure itself to adapt to the task at hand.

A folded design would fit easily in a pocket and could lend itself ergonomically to being used as a traditional handset. An unfolded larger design could display more detailed information, and incorporate input devices such as keyboards and touch pads. Even integrated electronics, from interconnects to sensors, could share these flexible properties. Further, utilization of biodegradable materials might make production and recycling of devices easier and ecologically friendly.

• Advanced Power Sources: Nanotechnology holds out the possibility that the surface of a device will become a natural source of energy via a covering of “Nanograss" structures that harvest solar power. At the same time new high energy density storage materials allow batteries to become smaller and thinner, while also quicker to recharge and able to endure more charging cycles. 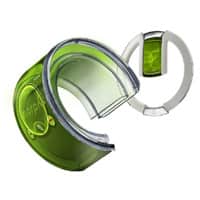 How feasible is the technology?

In addition to the above mentioned advantages, the integrated electronics shown in the Morph concept could cost less and include more functionality in a much smaller space, even as interfaces are simplified and usability is enhanced. All of these new capabilities will unleash new applications and services that will allow us to communicate and interact in unprecedented ways.

Do you think this phone will be out in the market any time soon?

Elements of Morph might be available in the market to integrate into handheld devices within 7 years, though initially only at the high-end. However, nanotechnology may one day lead to low cost manufacturing solutions, and offers the possibility of integrating complex functionality at a low price.

Is Nokia working on more such phones/technology?

Nokia Research Center is working on technology up to seven years in the future and creating concepts that challenge conventional practices and spark new innovations.

What, in your opinion, would mobile phones look like in the future?

Nanotechnology is just one key future research area for NRC, but an important one that will give us the freedom to design materials by manipulating atoms and molecules at the nanometer level. It hence has the potential of being both evolutionary and revolutionary when applied to mobile technology. A few years from now, phones will have new and innovative features different to the ones that are widely used today.