How we won the World Cup

How we won the World Cup

On 29 March 1983, Holi among the Indian community of Berbice, a tiny town in Guyana, was a shade more colourful. It was the day the Indian cricket team, under 24-year-old Kapil Dev, made the first serious dent in the seemingly unbeatable West Indies side that had dominated One Day Internationals (ODIs) since the first World Cup in 1975.

Barely two months before the World Cup, India had taken on cricket’s toughest assignment—a series against Clive Lloyd’s men in the West Indies. A team filled with batting legends—Vivian Richards, Gordon Greenidge, Desmond Haynes and Lloyd himself—backed by the fiercest pace quartet ever—Malcolm Marshall, Joel Garner, Michael Holding and Andy Roberts—the West Indies were not only two-time World Cup winners, but also the unofficial world Test champions. India, on the other hand, had lost a Test series of six matches 0-3 in Pakistan and three of the four ODIs (leading to the removal of captain Sunil Gavaskar) just before the Caribbean tour. By the time they arrived in Berbice, they had already lost the first Test and ODI, and defied expectations to draw the second Test.

But helped by Gavaskar’s brisk 90—agonizingly close to becoming India’s first One Day centurion—and Dev’s whirlwind 72 off 38 balls, India got to 282 for 5 in the allocated 47 overs, their highest ODI score till then. India’s bits-and-pieces bowling attack then struck at regular intervals, and the hosts fell 27 runs short of the target—their first ODI loss with a full-strength team at home. It was also India’s first ODI win against Lloyd’s men.

“It was definitely the best thing to happen to us," says Madan Lal, who picked up the crucial wicket of Richards in that match, “because immediately, our confidence shot up. West Indies were not unbeatable any more. We felt that we understood their bowlers, knew the weaknesses of their batsmen. It was a great advantage."

The foundation for an epoch-defying World Cup campaign had been laid.

Yet the Indian team had little expectation from the World Cup in England. In the previous two editions, India had lost all matches except one. “Most of the team members had bought flight tickets for a holiday in the US before going for the World Cup," recalls former Indian batsman and current chairman of selectors for the Board of Control for Cricket in India (BCCI), Krishnamachari Srikkanth. The only genuine fast bowler in the team, Dev, was backed by the gentle swing and seam of Roger Binny, Lal, and Balwinder Singh Sandhu. Srikkanth and Sandeep Patil were considered the only specialist One Day batsmen. In the first match, India were up against the defending champions. But with the memory of Berbice still fresh, the Indian batsmen set West Indies a competitive target of 263, built around Yashpal Sharma’s attacking 89 and cameos by Patil, Lal and Binny. If Dev’s men also needed a little luck, they got it.

“The game was called off the first day with West Indies at 67 for 2 because of bad light and rain," recalls Binny. “When we went back to Old Trafford (in Manchester) the next day, there was a massive cloud cover, and the ball was swinging a lot!"

Binny removed Richards and Lloyd, Sandhu picked up Greenidge, and the West Indies headed for their second defeat to India. “Throughout the World Cup, my biggest strength was Roger Binny," says Dev. “All I had to tell him was to pitch the ball up."

In the next match, against Zimbabwe, again delayed by rain, the gentle Indian swing bowlers transformed into a nightmare for the batsmen, with Lal and Binny scalping five wickets between them. India won by five wickets, and their campaign was on. “We were an understated and unknown bowling attack, but the overcast conditions in England were perfect for us," says Binny.

India lost their third match to Australia, but Dev took five wickets and then smacked 40 off 27 balls to stamp his authority. “That’s what Kapil was like," says Srikkanth. “He was always mad, he didn’t know how to give up. He was a daredevil and a die-hard optimist, and that rubbed off on the entire team. We were all pumped up with confidence because of him."

In their next match against the West Indies, however, despite Binny’s by now almost mandatory three-wicket haul, Richards’ 119 handed India a 66-run defeat. But there was one Indian who came out of the match a hero—Mohinder Amarnath, who had battled express pace and lethal bouncers to emerge as the highest scorer in the Test series in the West Indies, made 80 off 139 balls. “My father (Lala Amarnath) used to tell me not to back down from anything," says Amarnath. “He taught me not to be scared of anything on the field, and not care about pain. I learnt that lesson well, and it became part of my personality."

The back-to-back defeats served as a wake-up call for India, who now had to win their remaining two group matches to go through to the knock-out stage. “We did not want to go home after the start we had got," says Binny.

They almost did. A horrific batting collapse against Zimbabwe meant Dev walked in with the score reading 9 runs for 4 wickets. When Binny joined Dev at 17 for 5, there were still almost 50 overs left in the innings.

At lunch break, an embarrassed Indian team hid from their captain, leaving just a glass of orange juice on Dev’s seat. After lunch, Dev continued dragging India out of danger with his tail-enders, playing a chanceless and uncluttered innings, and hitting the loose balls out of the ground.

“He was hitting the ball cleanly, clearing the 80-yard boundary with hits that went 110, 120 yards," recalls Lal, with whom Dev shared a 62-run partnership for the eighth wicket. “I didn’t want to disturb him when he was playing like that, so I didn’t speak to him unless he spoke to me."

After reaching his 72-ball century, Dev called for a new bat, one that was built almost like a baseball bat, making his intentions clear. Dev put up a record ninth-wicket partnership of 126 runs with Syed Kirmani (who scored an unbeaten 24), to finish unbeaten at 175 with six sixes and 16 fours, taking India to a total of 266. India won the match by 31 runs.

“Before this, we had played well but we were still not convinced about our team’s calibre," says Dev.

India were on such a roll that even England, playing at home, offered little resistance in the semi-final.

Getting ready for the finale

In the two days between the semi-final and the final, the Indian team’s only thought was to remain in good spirits. “We were a happy-go-lucky team after the semi-final," says Amarnath. “We were up against West Indies, a side that was almost impossible to beat—but we had beaten this same team in the first match." 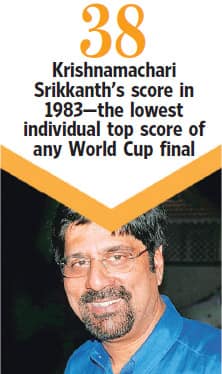 Srikkanth took it on himself to provide entertainment. “I like talking and cracking jokes, and doing silly things to make a fool of myself," says Srikkanth.

“He (Srikkanth) always thought that he spoke good Hindi," says Binny, “and he felt he was a great singer. He would go around singing Hindi songs seriously in a ridiculous accent and completely wrong lyrics, and everyone would be in fits of laughter." Strategies, tactics, and game plans were consciously kept out of conversations.

On the morning of the match, the players were flooded with demands for tickets from family and friends. “We used to get two tickets per player," says Lal, “but there were hundreds of people begging us for tickets. A friend took my pullover and tried to get into the stadium pretending he was part of the Indian team!"

The match at Lord’s, watched by a capacity crowd threatening to spill over on to the playing field, began in explosive fashion, with Roberts getting rid of Gavaskar in the third over. Opener Srikkanth felt intimidated: “I didn’t know what was happening," he says. “I couldn’t figure out what to do."

He chatted with Amarnath at the other end and decided to turn things around. “There are only two ways to handle fast bowling like that," Srikkanth says. “Either you are technically perfect like Gavaskar, or you just go out and play an attacking game. I wanted to break their rhythm, so I started attacking them."

Srikkanth hooked Roberts for a six, drove him through the covers for a four, but his 38 off 57 balls was to be the highest score in the Indian innings, which folded up at 183.

India’s defence, though, got off to a great start—Sandhu picked up Greenidge for one and Haynes fell for 13. But when Richards began smacking boundaries, India faced a crisis. Lal, who had been hit around by Richards in his previous overs, begged Dev to give him one more chance.

“The ball was moving, but he was hitting me on the rise as well—I thought if he was going after me, this could be my chance," says Lal. In that over, Richards mistimed a hook off Lal, and Dev, running with his back to the ball, took the catch over his shoulder.

“Then Binny picked up Lloyd," says Dev. “As long as Lloyd was there, he could have taken his team to the target. When he fell, West Indies started collapsing."

As Amarnath ambled in with the final ball, trapped Holding on the pad, and umpire Dickie Bird’s finger went up, India were the world champions. Amarnath picked up a stump and raced straight through to the dressing room, faster than his bowling run-up, avoiding the crowd.

“I was fielding at the mid-wicket boundary at that time," recalls Binny. “It was like being inside the stands. I knew the crowd would be on me the moment we won. But my focus was on grabbing one of the stumps before they all disappeared. The moment the last wicket fell, I ran as fast as I could towards the pitch. I must have been pretty fast, because after Amarnath, I was the next one to get a stump!"

When the Indian team finally returned to their hotel, after Dev had lifted the trophy, they found it besieged by supporters. “The lobby had turned into a party area," says Binny. “There was a bhangra band playing loud music, everyone was dancing, flowers were being thrown around."

“We were famished when we returned to the hotel," says Lal, “but with so much dancing, no one had thought about food till (tennis player) Vijay Amritraj, who was also dancing, got some sandwiches from somewhere."

The party went on till 4 in the morning. “By the time it ended," Binny says, “we were ready to go to sleep anywhere."