Art for a song

Art for a song

This tale of two art shows— only four months apart—is instructive. In the first week of December, Bhavna Kakar, who runs the Latitude 28 gallery in New Delhi, hosted a group show titled Class of 2008, featuring new masters’ of fine arts (MFA) graduates from the faculty of fine arts, MS University of Baroda. 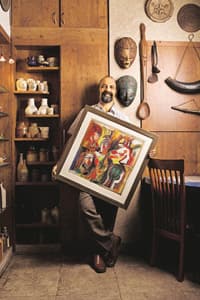 Collector Khushroo Kalyanwala with a mixed media painting by Dhiraj Chowdhury, which he bought for Rs50,000 two years ago.

Kakar was cautiously optimistic. “I was not really expecting a sell-out," she says. The market was bad, but the experimental works were good and were priced under Rs1 lakh each. Among the featured artists were Shreyas Karle and Sandeep Pisalkar, who were already beginning to make a name for themselves.

But not many came to see the show and only one work sold.

Naturally, when Kakar curated another show, Re-claim/Re-cite/Re-cycle, in April, she says she had “zero expectation". There were installations, paintings, photos and sculptures by established artists such as Atul Bhalla and Manjunath Kamath, as well as by newer names such as Prajjwal Choudhury and Rajesh Ram.

She was in for a pleasant surprise. “The response was fantastic," she says. Many works were sold. Kakar currently has two ongoing shows—one in Delhi and another in Dubai.

After a boom of five-six years, the art market in India has been in the grip of an unforgiving downturn since September— prices have crashed, some art galleries have shut shop and many artists are sitting idle, with no takers for their works.

And yet, this could be a good time for a buyer to enter the brave new world of contemporary art— even if you are not rich. For, despite everything, a spirit of resilience is in evidence from the sheer number of art shows in the Capital before the season winds up for the summer.

Over the last few weeks, Delhi’s art calendar has been chock-a-block with shows by established artists such as Jatin Das, Nilima Sheikh and Ranbir Kaleka, as well as newer artists. This sense of optimism in some quarters, coupled with the fall in prices of artworks, augurs well for the new collector on a budget.

While the art fraternity—artists, gallery owners, curators and dealers—benefited from the boom, it now welcomes the bust. “There was an extraordinary scale of speculation taking place," says Vivan Sundaram, one of India’s leading contemporary artists and an active figure on the art scene since the mid-1960s. “Art was escalating faster than the most fancy blue chip shares. From the auction house to the mutual fund—they were supplying art to those who had the money but no interest in art."

Greed had reached absurd proportions, says artist Atul Bhalla, with talk of selling artworks by size, much like real estate. “Some auction houses were saying that we will sell (artworks) by the inch," he says. “That is stupidity."

Art Review | When less is more

The plummeting market brought the party to an abrupt halt. Three reasons are usually cited for why this may not have been such a bad thing—financial speculators with no genuine interest in art have disappeared; prices have come down to realistic levels; and the quality of art on offer in these lean times is better.

“There are lots of works out there with crazy discounts," says Anubhav Nath, a Delhi-based art consultant. He recalls advising someone to try and sell a painting for Rs40 lakh. “Please get rid of it for 30 lakh," was the desperate client’s response.

“Artist(s) and gallerists are reducing prices by mutual understanding," says artist Gigi Scaria. “There aren’t enough buyers and there isn’t enough demand." It’s an opportunity for those who are new to the art scene and have smaller budgets—ranging from Rs10,000-1 lakh.

The advice to a novice on a tight budget is simple—don’t be in a rush to start buying art; begin by visiting galleries and attending exhibitions to educate yourself and develop “an eye"; and talk to artists when possible.

Here are some tips, based on the insights and experience of gallery owners, curators and artists, both new and established:

“A new buyer is like a new student of art," says Johny M.L., curator and consultant, who covers contemporary art in his online magazine Artconcerns.com. “They need to educate themselves for a year to understand what they like and what they don’t like." Something that is sorely required, according to Peter Nagy, who runs the Nature Morte gallery in New Delhi. “Most people here who buy art don’t even know what art is," he says. “They go by the buzz factor."

The way to educate yourself is to visit galleries regularly, go through the catalogues of the shows they host and identify the artists you like. There are many private as well as public galleries, such as the National Gallery of Modern Art in New Delhi, Mumbai and now Bangalore, with a collection of modern and contemporary art. Many young and emerging artists are not represented by a private gallery and show their works at public galleries such as the Lalit Kala Akademi, the Triveni Kala Sangam and Visual Arts Gallery in New Delhi.

Shree Goswami of Mumbai’s Project 88 gallery also advises reading books on art and learning about newer artists on the Internet. Most galleries are now online and showcase images of works by their artists. Younger artists who tend to be more Net-savvy upload images of their works on sites such as Flickr and Facebook.

Vivan Sundaram’s advice to the new buyer on a budget is to start bit by bit, by buying drawings or small paintings. Love of art, he points out, tends to grow on you, “They (artworks) become a part of life; a personal need that grows and develops." Goswami feels that ideal buys for a new player are flatworks, i.e. artworks that can be hung on walls, by newer artists—besides paintings and drawings, these include photographs, prints and etchings. “Look at younger artists and for that, look for a good gallery; one that has a reputation and has an eye," she advises. Among those which promote young artists, besides her own gallery, she mentions Chatterjee and Lal in Mumbai, Gallery Ske in Bangalore, and Nature Morte and Anant Art Gallery in New Delhi.

Johny advises dealing only with established galleries for reliability and authenticity of works purchased. “Galleries are not structured on price, they are structured on artists," says Nath. “Now every gallery is giving a good bargain; they are bending over backwards." In other words, a gallery with canvases by masters such as M.F. Husain and S.H. Raza priced at many lakhs of rupees is also likely to have an inventory of watercolours or prints by them, many of which could be priced under Rs1 lakh.

It is important to buy what you like, not what others say is good. Don’t follow the herd, don’t give in to hype and don’t buy what you don’t like. “It is important to like and connect with the artist’s works," says Mala Aneja of Gallery Art Motif. “The connection must be there (because) you buy to enjoy (the artwork)." But inputs from gallery owners on the artist and his work are important, she adds.

A cautionary tale of herd mentality, going back to the early 1970s, is offered by curator and writer Sunil Mehra. He recalls how artist Jaya Wheaton’s works of women with “Vogue-like faces in Rajasthani cholis" were the rage then. “People bought these huge canvases," he says, adding that the works haven’t stood the test of time and now look like pretty picture postcards.

Buy a piece of original art only because you like it, but it is no crime to also see it as a way of storing your wealth. However, as many are discovering now, art is not something to buy and sell in the short term. “They ask me, is it good investment and I say, I don’t know!" says Nagy. “It has to be seen as (a) long-term investment." Aneja agrees: “As a gallerist, I don’t comment on the appreciation in the value of an artwork. Good quality would appreciate over time."

Artists are wary of buyers who want a discount because they “love" the artist’s works. Their unanimous advice—don’t come looking for a bargain on an established artist’s works, instead look at newer and younger artists. “Some want to bargain and some don’t," says Bhalla. “Often, those who bargain turn out to be the richer ones."

Earlier this year, Delhi-based artist Mithu Sen decided gave away 150 of her original artworks—with a market value of at least Rs1.5 crore—in exchange for letters written to her. “As an artist, I was feeling pressurized by the market," explains Sen. This was her way of reiterating that art cannot be reduced to a commodity. But she too is wary of “art lovers" who want her works on the cheap. “I can’t devalue my work," she says. “They weren’t there when I was starting out. Now don’t ask for a Honda for the price of a Maruti!"

“If you reduce your prices, it can become like (a) fish market— who do you reduce your price for and who you don’t," says artist Rohini Devasher. “If you love art (then) it is no different from buying furniture or a vase—you save up, (just like you would) for those Bose or Sony speakers."

Kamath points out that in his experience, around 80% of buyers are interested only in reselling. “When the market was up, I would get calls every day saying, ‘you are my favourite artist, I would like to acquire your work for my house.’" That seldom turned out to be the real story if he sold it to them. “Within a week, the work was in the market," he adds wryly.