The Culture Cafe, Centre for Media and Cultural Studies, at the Tata Institute of Social Sciences (TISS) presents a reading and a panel discussion on the newly released volume Fire, authored by Jamia Millia Islamia professor Shohini Ghosh. The book is based on Deepa Mehta’s film Fire, which premiered to great acclaim in 1996, but outraged some with its lesbian theme.

Ghosh’s book examines the controversy that divided a nation. The book explores Fire’s scathing attack on both heterosexism and Hindu practices in India that oppress and marginalize women, as well as its revolutionary treatment of female characters, whose traditional duties are imbued with an unprecedented sensuality.

Ring out the old and ring in the new with this New Year special featuring some of the best Indian and international comedians, such as Anuvab Pal, Ashish Shakya, Mickey Hutton, Louis Ramey and Simon Evans.

With its feet firmly in the Indian classical tradition, Delhi’s fusion band Mrigya’s major voice is their violinist Sharat Chandra Srivastava. On bass is Indraneel Hariharan, on keyboard Sachin Kapoor and on rock guitar, Karan Sharma. The ensemble is completed by Rajat Kakkar on drums, Gyan Singh on tabla and other Indian percussion instruments, and guest appearances by Hindustani vocalist Sukriti Sen and Sufi singer Ghulam Quadir Niazi. The band even manages to get some jazz and Celtic influences into the brew.

For his second gig at the Blue Frog, Swiss trumpeter Erik Truffaz will keep the crowd hooked along with Tunisian singer Mounir Troudi and drummer Philippe Garcia. The jazz musician has been a fan of Indian classical music since 2006, when he played at the Kolkata Jazz Festival and met tabla player Apurba Mukherjee and his wife, singer Indrani Mukherjee.

You might have heard of the buried terracotta army of the Qin dynasty. Now you might be able to actually take replicas of some of these soldiers home. About 60 terracotta sculptures, including eight modelled on the Qin soldiers and made by artisans across South-East Asia, will be on display and sale at Studio Napean. The inspiration for these sculptures ranges from Chinese history to Hindu mythology.

Meandering but amusing, The Interview’s quick-fire dialogue hides a dark tale. A young candidate turns up for a corporate job interview only to realize that it wasn’t the question and answer session he had imagined. The questions become too personal and the requests too ridiculous even before the lie detector is strapped on. Jokes fly as the flighty interview quickly turns into an inquisition from hell and sinks into even more sinister territory from there. 1 hour, 10 minutes.

‘Sons of Babur’ was originally penned in 2008 by Salman Khursheed, a Union minister, in English and translated into Urdu by Ather Farooqui. The transfer to stage is by M. Sayeed Alam, who knows a thing or two about playing around with this period (his ‘Ghalib in New Delhi’ has a similar farcical approach), and about helming plays in Urdu. There’s an attempt to draw connections between the policies of Mughals and present-day events.

Ghalib in New Delhi transplants the legendary poet, the embodiment of 19th century Dehlavi tehzeeb, to the altogether less refined streets of modern-day New Delhi. Told of his posthumous fame, Ghalib visits the Capital to bask in its praise; instead, he finds himself increasingly bewildered by a culture where he is unrecognized and out of place.

Cuba Mía takes us back to the initial years of a spectacular revolution through the images that Rodrigo Moya clicked during the summer of 1964. This archive of Casa América Catalunya in Barcelona came to public notice for the first time in 2009, having remained unedited for 45 years. This collection displays almost 80 photographs on a variety of themes, such as education, employment, commerce, dance and music, and takes us on a visual and thematic journey.

Through a Lens, Darkly

Through a Lens, Darkly is an exhibition of photographs and photo animations by Madhuban Mitra and Manas Bhattacharya. This collaborative project explores the ruins of India’s first and only still-camera factory: National Instruments in Kolkata. The National 35 was meant to be the iconic Indian camera but it could never become that. From the late 1980s, the company dissolved its workforce, was declared a sick industry, and was eventually handed over to Jadavpur University in January 2009 to establish a new campus. Ironically, at the time it shut down, the factory had been developing National Reflex 2000, which would have become India’s first SLR camera. Rather than invoking nostalgia for that which is disappearing, the project attempts to highlight a certain history of labour and technology—and their slow but inevitable passage.

The solo show by Delhi-based artist Bharti Kher depicts works that depart from the legacy of repugnance she has created with her past works. Kher creates a far more domestic atmosphere, employing materials such as furniture, cutlery and clothes. 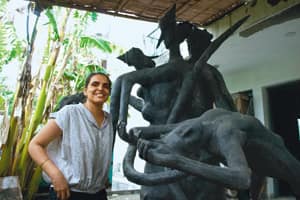 A kayaking and bouldering workshop will be held for those who want to participate in the Bangalore Adventure Race (8 January) and is open to teams of three. The deadline to register for the race is 2 January. The course comprises a 60km bicycle ride from Turalli in Kanakapura to the Manchanbele dam. Teams will kayak in the lake at the dam before putting their bouldering skills to test, and ride back to the starting point. Kayaks, life jackets and ropes will be provided on the day of the workshop as well as on the day of the event. Participants should bring their cycles and shoes.

8am. Participants need to assemble at Turalli in Kanakapura. Charges for the workshop, Rs1,500. Click here for details

Dylon Manuel on guitar and vocals, Chandu Fernando on bass, Shivane Wickramasekera on guitar and Jith Sirimanne on percussion form this rock band from Sri Lanka. In the year-and-a-half since its inception, the acoustic band has amassed a considerable following in Colombo and now makes its first overseas tour to Bangalore. The band will perform a mix of covers and originals from their repertoire, which includes alternative and contemporary rock tunes from the 1970s.

Reading a news report of a freak accident at the Majestic Bus Stand, watching reactions on a first date on a TV show, finding herself ignored at a posh London fine diner, or travelling across Germany (changing seven trains over 10 hours) to catch American musician Andrew Bird at a small club in Cologne—Swar Thounaojam’s Fake Palindromes loosely strings together seven dramatic pieces of diverse inspiration.

Ganesh Pyne presents his seventh solo show in a 51-year-long career, this time extending the burden of moral responsibility from the viewer to the artist. He enhances, and reflects on, the grandness of the Mahabharat. Pyne, who had been working on this series since 2009, is familiar with several Bengali versions of the text, but refers here primarily to Rajshekhar Basu’s translation. It is not the violence and grand dramatic moments in the poem that he has depicted. Instead, his reflections are more tragic sonatas, focused on the marginal characters.

The Gallery Image Kraft Art is hosting the exhibition Expression of Emotions, a show featuring 20 paintings by eminent artists of West Bengal, such as Prakash Karmakar, Jogen Chowdhury, Bijan Chowdhury and Rabin Mondal.

Littlei presents Monday Blues featuring Germany-based artiste T.L. Mazumdar, an experimental singer-songwriter. Mazumdar studied jazz and popular music at the International Music College in Freiburg. This will be followed by JBS TRIO, which has Bodhisattwa Ghosh on the guitar, Shovon Mukherjee on bass and Prem Jit Dutta on drums

Anya Theatre will celebrate New Year’s Eve with a night-long drama festival dedicated to the famous triumvirate of Bengali literature, Bibhuti Bhusan, Tarashankar and Manik Bandopadhyay. In the first half, there will be a talk on the writers, and a performance by members of the Manipuri Nartanaloy dance academy. The second half, at Rabindra Sadan, will see Katha Rupkatha Upkatha, a reading of selective works of the three writers by actors Soumitra Chatterjee, Dipankar De, Chanda Chatterjee and others. Five plays will be performed and at midnight, there will be a performance by the Team of Orpheus—a Presidency College band.

The Forum Art Gallery is presenting an eclectic mix of paintings, drawings and sculptures made by participants, including children, of the gallery’s art education programme. The works cover mixed media such as acrylic, oil and watercolours.

The Cholamandal Artists’ Village brings together the mixed media work of Shailesh B.O. and paintings of University of Connecticut art professor Kathryn Myers. Shailesh’s works focus on the yogic body. In this series, he presents watercolours on paper.

Spend the last few hours of the year in style as celebrated singers Heather and Ashley perform live at The Crown. With an elaborate buffet spread and spirits on offer, enjoy the music and a dance performance, and take part in games to win exciting prizes.

As part of the ongoing Isai Iyal Nataka Vizha festival, artiste Y. Gee Mahendra presents Imperfect Murder. This Tamil play has already had 200 shows and the rave reviews it has got make it a must-watch.

DakshinaChitra, in association with Kalakshetra, is organizing a performance by the renowned Kathak dancers Rajendra Kumar Gangani and Jaikishan Maharaj of Kathak Kendra, New Delhi. The performance will depict episodes from the life of the Hindu god Krishna.

The Madras Music Academy brings some of the best-known dancers in the country together for a festival that has a wonderful mix of Bharatanatyam, Kathak, Odissi, Kuchipudi and Kathakali. Performances by doyens such as Mallika Sarabhai, Padma Subrahmanyam, Chitra Visweswaran, Alarmel Valli, Vyjayanthimala Bali and the Dhananjayans are sure to get you hooked to the classical arts.