Early on in her career, in a 1984 show called When Champa Grew Up, artist Nilima Sheikh had created 12 folio-sized narrative artworks. She’d intended for these to be bound and exhibited as a book. But as the exhibition date approached, she abandoned the idea as “too outrageous". The paintings were then just put up on the wall.

This year, for Each Night Put Kashmir in Your Dreams, an exhibition that travelled from Chemould Prescott Road in Mumbai to the Lalit Kala Akademi in New Delhi, Sheikh wanted viewers to “walk into" her 6x10ft scrolls of large-scale miniature paintings. At the Akademi, her scrolls hung on a barely visible aluminium substructure, creating the illusion of floating canvases—most befitting, given the fantastical nature of the artwork.

A step ahead: Viewers had to climb a ladder to view an artwork at Gallery Mirchandani & Steinruecke’s 2008 show Anxious.

The most spectacular aspect of British sculptor Anish Kapoor’s first show in India, for many, is his Shooting into the Corner exhibit at Mehboob Studios in Mumbai. Sree Goswami of Project 88, Mumbai, has seen the cannon installation in its original avatar at the Royal Academy of Arts in London but believes that its manner of display at Mehboob Studios makes it a new artwork altogether.

“In London, the cannon fires into a room. Mehboob gives it a raw, giant canvas to play with. It looks like the cannon has conquered up to 20ft of one wall," she says. 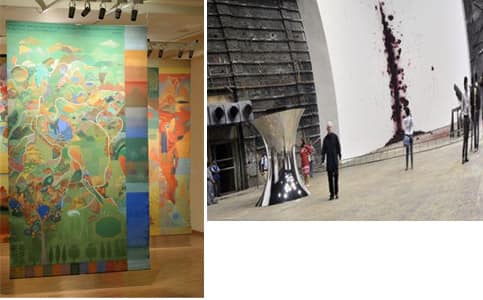 No boundaries: (left) Scrolls hanging on a barely visible substructure at Nilima Sheikh’s 2010 show at the Lalit Kala Akademi (Courtesy Nilima Sheikh) ; and Anish Kapoor’s Shooting into the Corner at his ongoing show at Mehboob Studios in Mumbai (Courtesy The British Council).

Dar calls himself a scenographer, borrowing from the 18th century French term for stage designer. “It’s the science of guiding the viewer’s eye to appreciate the artwork displayed to its fullest," he says.

A practising artist with a background in architecture and product design, Dar first got pulled into exhibition design for the large-scale retrospective on Binod Behari Mukherjee in 2005 at the NGMA and has since worked on several projects (he was also the force behind Sheikh’s floating scrolls and the digitized miniature projection).

This brings one to the fact that India doesn’t have too many qualified exhibition designers or museologists, a fact that Karan Singh, president of the Indian Council for Cultural Relations, brought up in a recent interview with PTI.

While gallerists and curators are increasingly paying heed to exhibition design, Dar argues that it is the domain of specialists. “A museologist can’t replace the curator—who is in charge of the thematics of the show—but is needed right from the development stage of an exhibition," says Dar.

He believes that the onus of high-end museology lies with public institutions and cites, besides the Kapoor show, the ongoing Raja Deen Dayal photography exhibition at the Indira Gandhi National Centre for the Arts (on view till 28 February) as a case in point. “It’s so well designed...that show could be anywhere in the world," he says, also adding to his list the Homai Vyarawalla photo exhibition put up by the Alkazi Foundation for the Arts at the NGMA earlier this year. “If public institutions come forth and take museology seriously, galleries will follow," he says.

With increasing demand, a few specialists are making an appearance on the scene. Mark Prime moved from the UK to Mumbai five years ago and has been working on several art projects as a consultant exhibition designer. For Kapoor’s Mumbai show, he was brought on board as a consultant by Amrita and Priya Jhaveri, who run a full-spectrum art service.

Prime was responsible for the phenomenal transformation of the vintage studio space into a space for hosting cutting-edge sculptures. He is evidently a busy man and concedes to having his hands full. Within a month of opening Anish Kapoor, he was called for designing Ranbir Kaleka’s solo at Volte in Mumbai, Sweet Unease, that opened earlier this month (on view till 15 February).

Dar reiterates that exhibition design is about directing focus to the art and not adding frills. “Everything else should be invisible," he says. In his own show, Brown Nation, at Gallery Espace a few months ago, Dar did away with all wall text. Titles and dates were on the floor.

A few bold moves over the last couple of years have helped stretch the boundaries of conventional display. Gitanjali Dang, a young curator, tends to frill it up. At her 2009 show, Caturday Is Cleaning Day, at The Loft in Mumbai, a take-off on the Internet obsession with cute cat images, she’d swamped the space with wool balls and paw marks. Her 2008 show, Anxious, at Mirchandani & Steinruecke had spelt “outrageous" in a different way altogether. Taking off from avant-garde playwright Peter Handke’s 1966 play, Offending the Audience, Dang had paintings displayed on the ceiling, on the floor, upside down and even atop a ladder. There were no titles or date markers. Mirchandani & Steinruecke’s Ranjana Steinruecke allowed her this experimentation and is of the opinion that curators and artists should be given a free hand.

“Only short of bringing down the house!" she adds.

Artists themselves are getting increasingly conscious of space and harnessing it for greater impact. Steinruecke rates Jitish Kallat’s Public Notice 3—which lights up the Grand Staircase at the Art Institute of Chicago—as one of the best examples. “He transforms the space into a seamless part of his work, indoor or outdoor," she says.

On cue with this, an ongoing group show at Project 88 called Form & Phenomenon (on view till 30 January) is about experience within the space and time continuum.

London-based artist Rana Begum’s sleekly lacquered aluminium sculptures, for example, employ geometry, form, repetition and colour to investigate the ways in which objects are viewed as we move around them. One of the most exciting emerging artists in India today, Hemali Bhuta, is also part of the show.

Bhuta’s work has always responded to space, perhaps a reflection of the fact that she studied interior design before enrolling in art school. For her first solo, The Hangover of Agarlum, in January this year, she used the gallery space of Project 88 as inspiration. She replicated two existing columns in the gallery in alum because, as she explains, Project 88 is a problematic display space with two pillars cutting across the centre. Creating two additional columns on the only long wall that was available to her was an artist’s response (the alum columns were bought by an undisclosed collector from Mumbai, an architect).

A month later, Bhuta’s husband and fellow artist, Shreyas Karle, divided up the Project 88 space with a diagonal wooden wall for his solo show. When Karle says it was because he “didn’t want to place (his) works in a white cube", it seems that he speaks not just for himself, but for all his fellow art practitioners.