There was a lot of derivative and mediocre fashion at the Lakmé Fashion Week’s (LFW’s) Winter/Festive 2016 edition, which concluded in Mumbai last Sunday. It may not be a glowing opening line for a piece on why seasonal trends matter, but it’s only when mediocrity is dominant that brilliant work gets noticed. This is a truism at most fashion weeks, for there is a multiplicity of them. But since multiple designers participate in most shows at the LFW, its five days run a bigger risk of becoming a glut, representing an industry that may be adding numbers in the form of younger, untried designers but little heft through innovation.

Even so, Indian fashion, as it stands today, is a bundle of provocative polarities. There is a constant churn and restlessness. Sometimes, extraordinary talent surges through like a wave. Some designers display market insight. And there are some admirable instances of brand definition and experimentation with fabric and silhouette.

Here is a selection of moments that stood out. In some cases, the clothes were the stars of the show; in others, the format and execution broke the boundaries that fashion must, distinguishing attention-seeking gimmicks from new frontiers.

Big move: Little Shilpa for all

Milliner and accessories designer Shilpa Chavan curated the much-publicized plus-sized fashion show, the first such in the country. She styled 10 debutant models to highlight the current trend of body positivism. Chavan calls her show “a strong statement, a movement and a challenge", and says it is one thing to argue for inclusivity in fashion and another to actually do it. She styled the 10 models (chosen out of the 160 who auditioned) in clothes by aLL, trying an assortment of accessories and looks, but none from her own creations. “Fashion week is for business. Designers will have no choice but to create plus-sized fashion if we have to be relevant for a majority," she says. 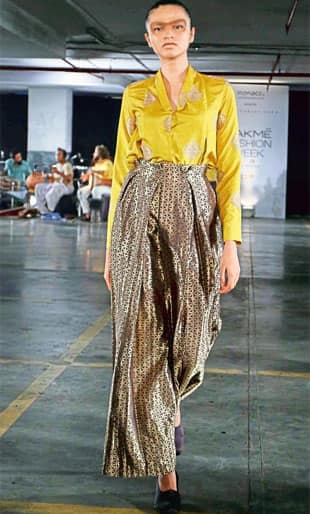 Garg, an established name in design intervention for hand-weaving, added a compelling nuance to his work with his collection Monkey Business. Shown (unfortunately) in a humid and poorly lit venue that diminished its overall impact—the parking lot of the Palladium mall in Mumbai— Monkey Business meant business. It showed the best silhouettes of this season. Working on “pleating" as the core, inspired by sari pleats that enable movement, he rethought how fabric is wrapped around the body, creating skirts, shirts, saris, lehngas, trousers in woven Banarasi brocade, silks, tissue, Mashru and Gajji silk. Quilting, printing and minimal embroidery were employed as techniques. “I want to create the stitched sari without using a single stitch," says Garg. It was a standout assembly. Planet Love, a limited-edition line by The Small Shop designers JasonAnshu, was one of the outstanding showcases at the LFW. This wasn’t a ramp show but an artistic display with models who stood on podiums, doubling up as installations in a room doused in neon glow, for the audience to walk around them. The loveliest part was the distinct fusion of silk and crêpe fabrics with techniques like flamingo patchwork, textured stockings, and a dress with panels stitched together. Capris, bomber jackets, dresses with hoodies, a couple of asymmetrical dresses in soft colours—aqua green, pale lilac, crayon pink, soft grey and black. Coloured hair, unconventional headgear, floral anklets gave it a youthful, optimistic vibe. Nothing brashly rebellious, nothing conformist either. Stainless steel yarn woven with pure silk was Pratap’s tool to create a glamorous spin on the school-style uniform. Modelled by Bollywood star Jacqueline Fernandez, the Pratap show launched Trends, an apparel and accessories format of Reliance Retail. Pratap sent out Fernandez wearing a skirt, shirt, jacket and trousers in silver as she meandered through piles of books on striking pointy stilettos. One look and you know the garment (and the collection) is another notable example of Pratap’s weaving dexterity. “Never has Kareena (Kapoor Khan) looked so ravishing as a show-stopper," said a spectator at Sabyasachi’s finale, titled Illuminate, for the LFW. The mom-to-be, who is the face of Lakmé Absolute, wore a silver-embroidered and sequinned bridal ensemble with a ‘maang tikka’, her head covered with an embellished diaphanous ‘dupatta’. The moment managed a beauty sweep, a visibly pregnant Kapoor Khan, her hand suggestively on her belly, wearing clothes that can only add an overdrive to Sabyasachi’s carefully constructed business of bridal couture. There were many other garments, including bejewelled micro mini sets, saris and ‘lehngas’. But Kapoor Khan’s natural radiance stole the show. 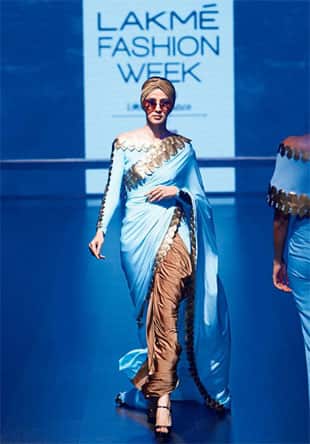 Inspired by French artist Henri Rousseau, designer duo Shivan & Narresh sent out a collection with linear textures created from crafted leatherette and “skein work". The latter was a geometric intervention of floral motifs in thin resin. “Resin and leatherette are water-resistant and light to wear," says Narresh. Thinly cut resin strips featured as tuberoses, opium buds and kites on garments made from neoprene or Italian jersey. Palazzos, saris, skirts, shrugs, bralettes, draped gowns, jumpsuits and swim shorts completed the looks for “destination weddings". “The resin surface treatment gives lustre to clothes, while sheaths of thin leatherette give a brush-metal look. This technique will remain in the brand’s library for years to come," adds Narresh. And so it will in the Indian fashion vocabulary too.