Review: WD My Passport X-factor for your Xbox

It's an external drive that adds a new lease of life to the Xbox console, and brings in a lot of space for more game installs and media storage 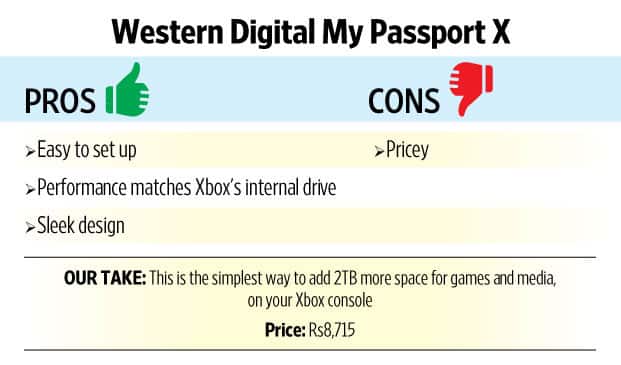 While both are gaming consoles par excellence, there is one critical difference between the Sony PlayStation 4 and the Microsoft Xbox One (and perhaps even the upcoming Xbox One S). While the former does not frown if the user decides to swap the default internal drive with one that has more internal storage capacity, Microsoft has pretty much locked down the Xbox One. You have to make peace with the internal storage capacity, and rely on external drives to add more space for games and media.

This is where accessories such as the My Passport X drive from Western Digital (priced at ₹ 8,715) come into the picture. Incidentally, this drive is also compatible with the older Microsoft Xbox 360 console. Read more here and here

At first glance, the My Passport X looks just like any other external hard drive from Western Digital’s stable. But the unique identity becomes clear when you look a bit closely at the plastic shell—the diagonal black lines on the panel are pretty much a salute to the design of the Xbox One console itself. These lines are just an imprint on what is an otherwise quite glossy and smooth black colour finish.

The My Passport X measures 110mm x 81.5mm x 20.9mm, and is overall a very compact drive packing in 2TB of storage, and the sleek design looks even more impressive.

The My Passport X is a USB 3.0 drive, and does not need any external power supply—it draws enough from the Xbox console, or any other computing device it is connected to.

Setting up the drive is as simple as it could have been. Simply plug the drive into one of the Xbox One’s USB ports, and the console will automatically detect it. You will then see a series of on-screen prompts which would let you configure the drive for your Xbox One console, and this involves just a handful of steps. Once this is done, you can move the games stored in the Xbox One’s internal drive to the My Passport X, or set it to be the default installation location for future game installs. Do remember though, once you format this to work with the Xbox One, the content will not be available on other devices you may plug in the drive to. The same process applies to the Xbox 360 users as well.

The speeds of the external drive are very similar to the Xbox One’s internal drive, which means there is absolutely no performance loss while loading games. This is quite interesting, because external peripherals usually do turn out to be slightly slower than any internal storage.

Do you need it?

The fact that this drive adds 2TB more storage to your 500GB Xbox One console is a genuine value-add. You can store as many as 50 more Xbox One games, and more than 200 more Xbox 360 games. You can also use this to store media files, if the console is an integral part of your home entertainment set-up, for movies, music and more. It doesn’t come cheap, but this is by far the simplest way to add more storage to your Xbox console.