They observe you quietly from within the boundaries of the frame. Yet they are hardly confined to the enclosure. They occupy the space in which they are set, and beyond. They do not shout for your attention, yet they get enshrined in your subconscious. The works of Prabhakar Barwe bring out the extraordinary in the seemingly ordinary. A welcome deviation from contemporary art that carries a whole lot of political and social baggage. 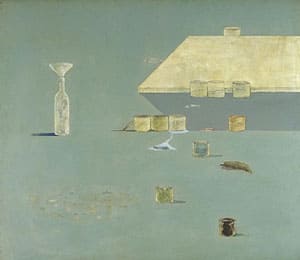 A millstone, a china jar, oil lamp—things, often, from rural settings—occupy Yashwant Deshmukh’s canvases. Deshmukh paints everyday objects, their form placed in space that itself seems to be the subject sometimes. He believes he was chosen to show alongside Barwe as he too is fascinated by things and forms around, although his way of looking is different. Describing Barwe’s work as poetic, he recalls the time when he was Barwe’s student. He credits the master for teaching him the approach to the abstract. “I learnt from him how to think of the painting visually. Barwe always said that we must find our own visual language," says Deshmukh. That lesson is at the root of Deshmukh’s works. He believes he does not show anything through his painting, he searches. An untitled drawing by Madhav Imartey.

As for Barwe’s work, Tandel believes one doesn’t have to read the title and then try and interpret the work; it has its own energy in its visual form. It doesn’t need any verbal back-up or any reference, but stands by itself. At the show, Tandel is exhibiting drawings done in gel-pen ink and charcoal.

Another artist who traces similarity with Barwe in his own way is Madhav Imartey. Senior-most among the four, Imartey spent some time with Barwe in the 1980s and worked with him on a few projects. His linear expression of objects is spontaneous and a way of improvisation. Imartey often chooses machine-like objects, such as a typewriter and a stove burner, to draw. “Sharp flowing lines, tube-like serpentine forms and traces of limbs or parts of the human body can be seen in this drawing, the source of which is a stove burner," he says about one of the untitled works on display. That his subjects are things that are usually not looked at for their aesthetics brings him close to the genre that defines Barwe. However, Imartey does not feel there is a need to put the spotlight on this way of thinking, or that it is unjustly overshadowed by content-driven art. “This show is only to say that there is this as well as that." 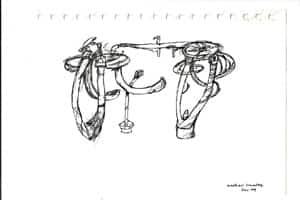 For instance, her Porous Walls, which is on display at the show. Potnis says she is moved by the peeling walls in middle-class homes and wants her work to be a part of those walls. “I also hope to evoke a metaphorical reference to systems or beliefs crumbling under daily pressure," she says. Possibly a fitting visual for the world of art populated and influenced by a 24x7 news cycle.

Legacy: A-vanguard will show at Gallery Threshold, F-213/A, Lado Sarai, New Delhi, until 15 February. For details, log on to www.gallerythreshold.com