Thanks for Visiting Mint
You seem to have an Ad Blocker on. Please turn it off in order to continue, or whitelist Mint
HOW TO TURN OFF AD BLOCKER
OR
REFRESH IF YOU ALREADY TURNED OFF THE AD BLOCKER
Home >Mint-lounge >Adam Sachs | The accidental Indophile 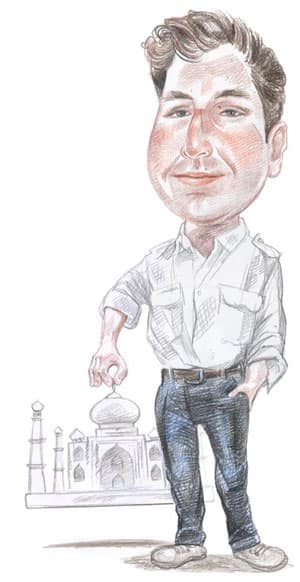 Photo-opp: Sachs got the ‘I’m holding the Taj Mahal by its roof’ photograph during his trip. Jayachandran/Mint

Ignighter’s been in the news recently for its almost accidental India business plan.

Three New Yorkers set up a group dating site in 2008, to help their fellow men skip those awkward one-on-one Friday night blind dates. Unsurprisingly, the almost conservative, safety-in-numbers idea of going out with a group of strangers of the opposite sex doesn’t find too many takers in the US. But they noticed a dramatic spike in the number of users from Indian cities, where it’s so much easier for the website’s mostly 18- to 25-year-old users to just tell their parents: I’m going out with friends.

When Sachs and his partners first registered the traffic from India, it didn’t result in an epiphany. It was more a case of “What the hell is this? Okay let’s go back to normal life." But by January 2010 they couldn’t ignore the Indian wave and they made some changes—like replacing the image of the American couple on the home page with one of an Indian couple, and switching the word US with India in their tag line, “the number one group dating site in the US". The National Review recently called their experience “the future of American entrepreneurship".

By that August, Ignighter.com (ignite your night life, etc.) had crossed a million Indian users (the number has since doubled). Overnight, Sachs and his partners were networking furiously with Indians in Manhattan to find out more about this faraway country that none of them had ever visited.

In February, after raising nearly $3 million (around ₹ 13.4 crore) from venture capitalists, Sachs was finally ready to hit the road. “We had so little money we didn’t even want to pay for a trip to India, so once we closed the round the first thing I wanted to do was get here," he says.

Earlier this week the website even dropped its average monthly $40 charge per group and decided it was time to indefinitely be a free site. “We don’t anticipate an increase in traffic but we’ve already seen dramatic increases in engagement," says Sachs.

It doesn’t take long for us to break the ice. Especially as both parties are in agreement that the live singer at The Oberoi Delhi’s Club Bar is killing Sting’s Fields of Gold. We move our beers to a quieter spot where he regales me with his observations about local culture.

Sachs has figured that pop music equals Bollywood. Or, as he puts it: “There is no Lady Gaga in India." He’s noticed that we overstaff every business. When he visited the office of matrimonial website Jeevansathi—“the pinnacle of Web success"—he was overwhelmed by the number of people who worked there. “Our team is five people," he says worriedly. Also, he’s unlikely to reach the venue of a Delhi farmhouse party by 10.30pm, because he now knows from experience that he’ll be among the first ones there. He’s confirmed that men do actually hold hands in India, that Smoke House Grill is Delhi’s hottest nightspot and that life is so much easier with a full-time driver. And, of course, he’s posed with that ultimate stony Indian beauty, the Taj Mahal.

Sachs is interested in my view of the Indian dating scene—when I play back the recording of our interview, I realize he asked me more questions than I asked him. But to make Ignighter an Indian relationships site based in India, it’s important for its founders to understand the complicated neo-conservative man-woman dating dynamic of New India. Also, are Indians only interested in the website because it’s from New York and this is what the cool people in that coolest of American cities are doing? Currently the website is in the process of analysing its overwhelming database. So far, all Sachs can say is that Indian users send an unbelievable 1,000 messages a month on the site.

In a previous lifetime, Sachs never had to worry about decoding the dating habits of an alien culture. After a double major in film and history at Chicago’s Northwestern University, he joined the television department at Sony Pictures, where his job consisted mainly of inserting commercials in TV shows. “So if you were watching Jeopardy, which I’m a big fan of, I would be the one arranging the commercials in the breaks," he says. Eventually he linked up with college pal Osit and common friend Owocki to start Ignighter.

In the last year, the efforts of the overnight anthropologists have been also backed by several investors of Indian origin, such as Google’s Rajan Anandan, Kae Capital’s Sasha Mirchandani, GSA Venture Partners’ Somak Chattopadhyay, Exclusively.in’s Sunjay Guleria, and others.

On this breathless trip too, where Sachs has interviewed potential country heads in four cities, begun the process of incorporating an Indian company, clarified the logistics of setting up a payment gateway so he can sell services off the website, met users and potential users to find out what exactly they want from Ignighter, he’s squeezed out some networking time. “People keep passing me around. After just two weeks, my Rolodex in India beats my Rolodex in New York," he says.