Home >Leisure >The long road to the top

The long road to the top

The long road to the top

In many of her published interviews, the veteran Hindustani singer Gangubai Hangal recalled a particularly haunting memory from her early youth, an anecdotal capsule of the bleak times she lived through. In 1924, the Indian National Congress held its annual session in Belgaum, Karnataka, and Hangal, then aged 11, was picked to sing the invocation song along with five other classmates. 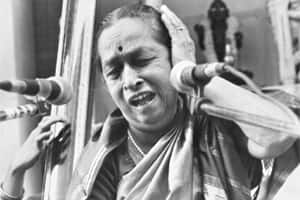 Gangubai Hangal rose to the peak of musical excellence against many odds. Hindustan Times

Hangal’s first reaction, an entirely natural thrill at the prospect of singing before Mahatma Gandhi, gave way to a creeping fear that grew out of her bitter experiences with casteism and with the demeaned status of the female singer. She was afraid, she said, that she would be instructed to clean the dining area once the upper castes had eaten.

That didn’t happen—it was, after all, Gandhi who was presiding over the session—but the fear was clearly pernicious enough to be remembered many decades later. “I don’t feel angry," Hangal, who died earlier this week at the age of 96 in her hometown of Hubli, told one reporter in 2006. “Those times were different."

Hangal’s death marks a torrid month and a half for the veteran performers of Indian classical music. Since the beginning of June, other notable musicians to have died include Carnatic percussionist Palghat R. Raghu, sarod maestro Ali Akbar Khan and the eminent Carnatic singer, D.K. Pattammal.

Like Pattammal, who died a few days before her, Hangal’s main challenges in becoming a musician had less to do with learning music and more to do with straining at the social shackles of her era. Pattammal struggled to become the first Brahmin woman to sing on stage; Hangal struggled to overcome her lower-caste status and her poverty. Both women invaded an archly male bastion—that of respectable public performance—and made it their own.

Hangal’s mother, Ambabai, was a proficient Carnatic singer, but she gave up her own craft lest it diffuse her daughter’s focus on Hindustani music. Her father, not officially married to Ambabai, was largely absent, and Hangal herself never married the man she considered her husband. Her family life, as a consequence, was deeply fractured. “I used to sit down to practise and felt besieged by the problems," she wrote in her autobiography, Nanna Badukina Haadu (The Song of My Life). “My voice would choke and I could sing no further."

“It was a tough era she grew up in," says Deepak Raja, a Mumbai-based author of three books on Hindustani music. Living as a girl in Hubli, Hangal regularly travelled to the neighbouring town of Kundgol to learn from Sawai Gandharva, the master craftsman of the Kirana gharana. As with Gandharva’s other star students, Bhimsen Joshi and Firoz Dastur, Hangal’s musical legacy inevitably became the carrying forward of the Kirana standard.

“Dastur, who also passed away recently, remained the most faithful to his guru’s style," says Raja. “But Joshi and Gangubai turned out to be totally original, developing styles to match the quality of their voices. That is the strength of the gharana system—it can inculcate the gharana’s philosophy of music-making and still produce entirely original music."

The Kirana gharana, established in the very early years of the 20th century, urges musicians to develop a raga in small increments, and to dwell meditatively on each note and phrase. As a singer, this was Hangal’s forte. In her trademark pose, the palm of her left hand cupped over her ear, Hangal would swim through ragas as if they were pools of molasses, slowly and purposefully. This pleased the purists, but the large crowds shrank away from her rigid classicism, as well as from her unorthodox voice.

Gruff and leonine, Hangal’s voice acquired its characteristic masculine tenor after a throat surgery. “But the voice very much reflected the person she was," says singer Shubha Mudgal. “She was a tiny little lady, but there was a certain honesty and integrity and a massive majestic dignity to the way she lived her life. When people tell me that my voice is powerful, I’m always tempted to say: Look at Gangubai Hangal."

Hangal shattered the archetype of the feminine voice as a honeyed, tinkling quaver. “One wouldn’t call it a charming voice," Raja says. “It was more authoritative, like Kesarbai Kerkar’s voice before her. Gangubai had a very authoritative way of delivering her music. She was easily one of our finest vocalists of the 20th century."

The comparisons with Kesarbai are a regular feature. Rajeev Taranath, the renowned sarod player from Karnataka, calls Kesarbai “the princess. But after that, it was Gangubai who gave women musicians a certain kind of status and dignity". As an artist, Taranath says, “Gangubai carried the burden of the Kirana gharana, and she sang it unadulterated"; as a person, “she was just such a maternal figure—she poured affection from her inexhaustible store. You would feel soothed just talking to her."