Do you remember the last time you had to sit through a puja at home? Have you ever had to? An authentic do-it-yourself one, performed by your grandmother or grandfather, unlike the quick fix ones done in big cities when the priest calls two days prior and gives you a budget that will cover everything. 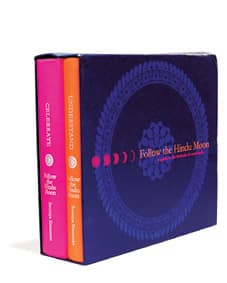 For those of you who want to relive that childhood Diwali, Pongal or Onam vacation at grandmom’s, this two-volume compendium on celebrating Hindu festivals in South India, Follow the Hindu Moon, is a great pre-festival buy. The author, Soumya Aravind Sitaraman, is a Silicon Valley housewife who embarked on a long research project about South Indian festivals out of personal interest—away from home, she wanted to catch up with her family’s religious roots. Sitaraman made many trips to India, and spent long hours observing and listening to elderly ladies here and in the US, before she finally decided on the format for her guide.

Complete with charts, glossaries of religious terms in Sanskrit and regional languages, their literal translations and symbolic significance, and family photographs of festivities taken by Usha Kris, Follow the Hindu Moon would make hard-boiled agnostics scoff.

In her introduction, Sitaraman writes, “This two-volume set is the missing record of the method and mythology of traditional ways and, most importantly, of the importance of ceremonies that make this legacy meaningful for us to sustain and carry forward to the next generation." Later on, she says: “Although the book is tailored for a generation that counts time by seconds, taking that extra bit of time makes all the difference. Slowing down to savour the moment has a purpose and a subtle but distinct result..." Her long introductory piece is, in fact, one of the best things in the book. It is the story of her personal journey of rediscovering rituals that she grew up with. She fleshes out the characters of her teachers, her “new grandmothers", in great detail. 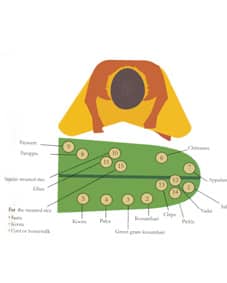 On the platter: A diagrammatic representation of the exact way a festival meal is traditionally served on a banana leaf in Karnataka.

The 900-odd pages—meticulously divided to include the basics of a home puja, specifications according to festivals throughout the year, organizing for traditional rituals, easy explanations of the complex system of Hindu cosmology and festival food and recipes—fulfil the purpose she set out with.

Sitaraman’s guide should not, however, be mistaken for a short cut or simplified version of festival celebrations suited to modern urban needs and time constraints. She tells you how to do it the authentic traditional way. At the cost of prescribing some rituals that come across as obsolete and odd, even offensive—celebrate Makara Sankranti with your husband’s family; stay awake all night for Thiruvathira, a women’s festival meant for worshipping the god Shiva—she sticks to the original.

There’s a brief background of how the Hindu festival calendar rotates and the significance of each festival according to the planetary positions of the moon and the sun. It’s a well-researched chapter that packs in a lot in a few pages. But the real appeal of the book is utilitarian. The significance of every ingredient used in particular rituals, every small step in a puja, the etiquette, and every recipe, is described in simple, intelligible terms.

The book offers a manual to help you spend Diwali the traditional way. We summarize the easy-to-do steps

Wake up before dawn on Diwali day. The ideal time is during the ‘Brahmamahurta’ (auspicious moment), around 4am. Bathe and cleanse yourself. You may also play auspicious music such as the Nadaswaram, Suprabhatam, Vedic Rudram, Chamakam or other prayers (CDs are available in almost all music stores).

Set up the place of worship, draw some ‘kolams’ (symmetrical patterns created by sprinkling white flour on the floor) and place the idol of Lakshmi near it. Place sweets, yellow bananas, betel leaf, betel nut, flowers or fragrant leaves and a coconut in front of the idol.

Taking an oil bath is considered auspicious; it is a cleansing ritual which is believed to wash away traces of grief and hardship that we may have experienced during the year.

Preparing for the oil bath

Heat sesame or coconut oil in a small vessel. Add betel leaves, black peppercorns, crushed ginger and a teaspoon of uncooked rice grains (these ingredients are also believed to prevent sinusitis and common cold). Place the oil, some ‘seekai’ (a fruit that serves as a natural scalp cleanser), turmeric powder, ‘vaasanai podi’ (seeds that serve as natural soap) and a pot of water in front of your puja.

Light camphor and perform ‘aarti’ (move the lighted camphor in clockwise direction in front of the deity with your right hand), ringing chimes or bells and saying any sloka (holy chants from Hindu scriptures) that comes to mind. Light incense and sprinkle water in a clockwise circular path over the offerings thrice. Every member of the family should perform a ‘namaskaram’ (bowing with folded hands) to the deity.

One by one, each family member should sit on a mat in front of the deity. The matriarch of the family should take some oil and rub it on the scalp of each person. Perform a ‘namaskaram’ to the matriarch, receive new clothes from her, and go for your bath with ‘seekai’ and ‘vaasanai podi’. While taking a bath, invoke the great rivers of India by chanting the following sloka: “Gangaycha, Yamunaycha, Godavari, Saraswati, Narmaday, Sindhu, Cauvery, Jalesmin Danndhim Kuru".

After the bath, all family members should congregate by the puja and perform ‘namaskarams’ to elders and receive gifts and blessings. Everyone should eat the ‘lehium’ first. It is a potent digestive made with gooseberry paste and ghee and is believed to help digest the festival food and sweets. Call and greet extended family and friends and invite them to your home. Light your home with diyas and candles in the evening, celebrate by wearing new clothes, exchanging gifts and offering sweets to guests.

The first Diwali of newly married couples is called Thalai Deepavali. Elders anoint the couple with a paste of ‘chunnam’ (gypsum) and turmeric paste on the forehead, hands and feet, in a ceremony called ‘nalangu’, and give them new clothes and jewellery.