Close race to the starting line

Close race to the starting line

With a little over four months left, the race to grab that solitary ticket to the London Olympics 2012 is between two men, Ajay Jayaram and Parupalli Kashyap.

Both men will be conspicuous by their absence from the Tata Open India International Challenge 2011 badminton tournament, which started with the qualifying rounds on Wednesday at the National Sports Club of India (NSCI) in Mumbai (the main rounds begin Thursday). Though the Tata Open provides valuable ranking points to its competitors, both Jayaram and Kashyap need bigger tournaments to feed their desire to participate in London 2012. 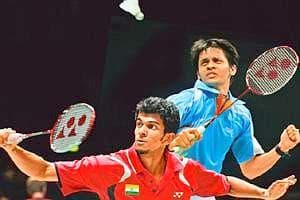 That elusive No. 16 does not seem improbable, considering Kashyap was No. 20 in February and Jayaram, riding on a wave of resurgence this year, was No. 24 in September, their highest respective rankings so far. The two-man race has also meant that the third-ranked Indian, Chetan Anand at No. 55, has excused himself from the NSCI tournament, still recovering from an ankle injury and with little hope of making the London berth.

The Tata Open India International is a grade IV event in the Badminton World Federation (BWF) calendar in which the winner gets 4,000 points, while the Yonex Sunrise Syed Modi Memorial India Open, a Grand Prix Gold event to be held in Lucknow from 20-25 December, will earn the winner 7,000 points. It’s the reason why Jayaram and Kashyap are already acclimatizing in the Uttar Pradesh capital for next week’s event.

Lucknow would merely be one of the possible 8-10 tournaments that the two men will be playing over the next few months in their attempt to qualify for the Olympic Games, which Kashyap says is not his area of focus.

The important thing is to win a medal, qualifying is not really a target," he says over the phone from Lucknow, something Jayaram agrees with. “What I mean is I need to be good enough to win a medal there, which would automatically make me good enough to qualify. Many people have gone to the Olympics, no one will know you have even played there, unless you win," adds Kashyap, a trainee of the Gopi Chand Badminton Academy.

Jayaram adds: “It’s going to be at the back of my head but there are other important events as well. Qualifying is not good enough if you are aiming to play at that level."

“It does give me a lot of confidence," says Kashyap. “Last time, in the Sudirman Cup, he (Lin Dan) seemed two steps ahead of me. In Hong Kong, I could see a lot of difference in how I was feeling (towards playing Lin Dan)."

Jayaram beat Nguyen in straight games but lost to Simon Santoso (Indonesia, No. 8) in the Yonex Open Japan 2011 in September. A month earlier, in the Yonex BWF World Championships 2011, he lost narrowly to Jin Chen (China, No. 5), 18-21, 21-12, 21-11, displaying—like Kashyap—a lack of fear for higher-ranked opponents.

Training with English coach Tom John for some time now, Jayaram says he still lacks in consistency though his skills and fitness have improved. “My strength was always deception, now I have become more aggressive as well," he says. Kashyap is working on his core strength, to improve his balance and to be able to adjust better to the changing pace of the match.

“I don’t know what our rankings are at the moment," says Kashyap.

“I don’t believe this need to qualify is any added pressure. If anything, it puts our focus in the right direction."

Smash it: After Lucknow, Kashyap (in blue) and Jayaram will play the Victor Korea Open and Maybank Malaysia Badminton Open, both in January.