Home >Mint-lounge >A woman for all seasons

A woman for all seasons

A woman for all seasons

The Indian publishing market is flourishing. It has recently started laying claim to throwing off its colonial shackles and producing work solely for an Indian market. A critical and not just commercial success is something that is well-received in India; the approval of the English-speaking West is unimportant.

India’s numerous literary prizes, often too numerous to find deserving books to award them to, have yet to really reflect this trend and tend to go to an India as seen more or less from the outside. This is reflected in the general paucity of quality translations from Indian languages. To not offer to an increasingly English-speaking reading market the best of this country’s peerlessly rich, diverse and plentiful canon going back to time immemorial, is, well, plain bizarre. If you think it’s going too far to say it’s the equivalent of not being able to find Charles Dickens in England, then at least allow me to say it’s like not being able to choose from an array of translations of Beowulf. While the dearth of quality translations doesn’t, mercifully, stem from the same reasoning, it is, in effect, like living with Franco’s predilection for banning books. Shavian moralist: Chughtai’s writing on women and religion was often pegged as controversial.

And subtlety is Chughtai’s forte. Hailing from an educated, liberal Muslim family, the sort that educated their children equally in the Quran, Farsi and Urdu literature, with her elder brother already a well-known writer in her teens, Chughtai is best known for her stories about the lives of middle-class Indian women. If her sensitive, thoughtful work is pegged as controversial, it must also be said that it only causes a flutter among those who adamantly refuse to see the world for what it is. Writing largely on women, religion and the domestic sphere, she neither generalizes nor preaches, as she knows her subject far too intimately for that sort of artless moralizing.

Nevertheless, Chughtai as moralist—and that too of the Shavian school—is a major feature of her life and work. “From a young age we were aware that there was some distinction between Hindus and Muslims. Outward profession of brotherhood went hand in hand with discreet caution... They talked about enlightenment and liberal ideas, professed deep love for each other, and recounted tales of great sacrifice for each other. The English were held to be the main culprits. All this would go on while the elders were secretly nervous about the children doing something that would defile the purity of religion!"

While one would wish to imagine it otherwise, this split between private sphere and public face, between conversational and actual liberalism hasn’t exactly faded into oblivion. Chughtai’s unforgiving eye picks it out in the details. If their Hindu guests weren’t due, “then seekh kebab and roast chicken would have been cooked; lauki raita and dahi bade would not have been prepared. The difference between ‘cooked’ and ‘prepared’ was interesting." 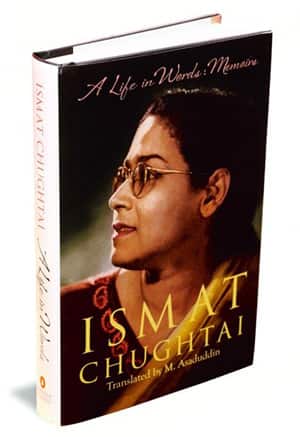 Her own marriage is a subject largely absent from this memoir, other than her initial reluctance to get married at all, and her husband’s threats of divorce during the notorious censorship trial of Lihaaf. A Life in Words focuses more on her education, her writing, and her struggle to become the first Indian Muslim woman to get both a bachelor’s degree in arts and a bachelor’s in education degree. This is enough for a memoir, but it’s a shame nonetheless. She is so perceptive when it comes to pointing out the myriad ways in which women are oppressed and the way in which they get around this, as in the account of Mangu, the coachman’s daughter, who feigns demonic possession to get away with hitting her mother-in-law when finally tired of being at the receiving end of beatings.

Women manipulate, she deduces, as fairness is often not an option for them. Hers is the feminism, the defiance, learnt from a full engagement with life and not by rote and politically correctly from books, often from entirely different cultural contexts. She advises the reader quite simply to “talk to people", to engage with them, to ask them questions, to understand the context of their life before attempting to understand them. If only the various Pakistani op-ed writers who present “I asked the driver" as their most profound communication with a class outside themselves, would listen.

Chughtai does not position herself as a crusading truth-teller. She is far too honest and straightforward for the truth to be a special mission; it is, quite simply, the truth. Nowhere is this more apparent than in the moving account of her and Saadat Hasan Manto’s obscenity trials which happened to come up before the same judge on the same day.

She has far more social clout than the beleaguered Manto, and the judge calls her into his anteroom for a private conversation, “‘I’ve read most of your stories. They aren’t obscene. Neither is Lihaaf. Manto’s writings are often littered with filth.’

‘The world is also littered with filth,’ I said in a feeble voice.

‘Is it necessary to rake it up, then?’

‘If it is raked up it becomes visible, and people feel the need to clean it up.’"