Ahead of World Alzheimer's Day on 21 September, a look at why we need to pay attention to the strife and stress involved when someone we love is diagnosed with this disease

It began with the occasional memory lapse. Bengaluru-based Prem Panicker, editor of online journal Peepli.org, was initially amused and exasperated when his Chennai-based mother began claiming that random people on TV were their relatives. But within months, the memory lapses—so odd in a woman who once knew the phone numbers of 150 relatives by heart—became more pronounced and ominous. She would wander away without telling anyone. One day, she forgot to turn off the gas in the kitchen. Still, it wasn’t until Panicker’s mother called him a mere 10 minutes after they had spoken and insisted that they hadn’t had a conversation in weeks, that he knew with certainty something was wrong.

The family realized that they were dealing with something far more serious than simple forgetfulness related to ageing. In 2010, his mother was diagnosed with Alzheimer’s—a kind of dementia that causes slow, progressive and irreversible damage to the brain cells, creating a spate of conditions that begin with short-term memory loss but soon graduate to complete cognitive decline and loss of motor control.

Alzheimer’s is just one of the diseases that causes dementia; the others include strokes, vitamin deficiencies, thyroid problems, all of which can attack brain cells. “Memory is the first to be affected," says neurologist Piyush Ostwal, head of the Neurology Clinic in Pune. He’s also a consultant at the Lokmanya Hospital and the Dr DY Patil Medical College, Hospital and Research Centre, both in Pune. “Patients find themselves forgetting the names of people, places and objects. Then they start losing track of the date, month and year. Remote events are often remembered better, but registering new information is most difficult. Increasingly, they become dependent on caregivers for even basic activities, such as eating, bathing, using the toilet and dressing. In the later stages of dementia/Alzheimer’s, the burden on the caregiver becomes intense." 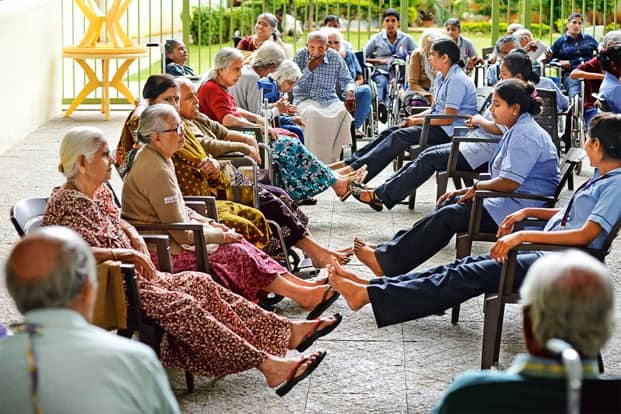 Caring for a family member with dementia can be physically and emotionally draining. Widespread ignorance compounds the problem.

“Relatives and caregivers just don’t know enough about the disease and often grapple in the dark. They presume it’s a normal part of ageing or, worse, associate it with superstition and stigma. This lack of awareness is the biggest challenge we face in the arena of dementia care," says Meera Pattabiraman, a member of the World Dementia Council and chairperson of the Alzheimer’s and Related Disorders Society of India (Ardsi), a voluntary organization that strives to promote awareness about Alzheimer’s.

Ardsi has been involved in setting up daycare centres for dementia-affected people and provides training and counselling services for caregivers across the country. It runs nine caregiving centres, which include daycares and residential homes—seven in Kerala and one each in New Delhi and Kolkata. In addition, there are a few non-profit organizations independent of Ardsi that run daycares in the country, including the Nightingales Medical Trust (NMT) in Bengaluru and Silver Innings Foundation near Mumbai.

According to Ardsi’s “Dementia India Report 2010", the only nationwide study available today, 3.7 million Indians are living with dementia. About 10% of India’s population is over the age of 60; of this, 3% have been diagnosed with Alzheimer’s. In 2050, the number of elderly people in India who will be affected by the disease is estimated to be more than the entire population of the US, says Pattabiraman.

The financial burden is expected to triple by 2050. The report estimates that the total financial burden of the disease has already cost the country ₹ 14,700 crore, with the average cost of individual care assessed at ₹ 42,000 annually—this includes hiring a caretaker, expenses related to medication, etc. The calculation does not take into account the potential loss of income for caretakers, many of whom have to quit their jobs to offer care, or any other incidental expense.

With little or no government subsidy, these expenses are shouldered by families who are already under great emotional strain.

The financial implications aside, watching a loved one decline can be a long, hard, lonely journey into an emotional abyss for a caregiver. Most people underestimate the sheer energy and effort involved in caring for a dementia patient 24x7.

Bengaluru-based Swapna Kishore, a software consultant, trainer and author, has blogged about her mother’s dementia journey, which spanned 10 years. Her mother died in March 2012. Kishore has also been creating online resources that can help other dementia caregivers. Dementia Care Notes (Dementiacarenotes.in) is a comprehensive go-to resource for those caring for persons with dementia. “If families understand dementia, they can find better ways to plan and provide care," says Kishore. “Everyone will be less stressed." However, given the very nature of the disease, stress seems inseparable from care. Kishore recalls that even mealtimes became difficult in the later stages because her mother could not even swallow.

While the emotional repercussions of dementia are certainly devastating, for many, even getting a diagnosis can be an ordeal. “Today, only 10% of sufferers are diagnosed in the early stages. Most of the diagnosis (nationwide) is made in the advanced stage," says Pattabiraman. “Even though there is currently no cure, medication is more effective in the initial stage as it can halt or significantly slow down the rate of decline."

Lack of resources and awareness, however, mean that most people don’t get the care they so desperately need. Pattabiraman’s own father suffered from Alzheimer’s in 1997, at the age of 70. For the next five years, the family, she says, went through stages of denial, disbelief, guilt and grief.

“Since short-term memory is affected first, the first person to be wiped from his mind was the most recent one to have entered his life—my daughter and his grandchild," says Pattabiraman. “As the disease progressed, he couldn’t recall my husband and later, memories of me and my mother were wiped away."

Shortly after his death, driven by pain and anger, Pattabiraman joined Ardsi’s Thiruvananthapuram chapter. Many people, she says, are unable to understand why a person with Alzheimer’s remembers something that happened 40 years ago, but can’t recall what happened the previous day. “Family members mistakenly feel that the patient is deliberately trying to irritate them, an attitude that we’re working hard to dispel," says Pattabiraman.

There needs to be a greater sensitivity while dealing with patients and caregivers alike, says Soumya Hegde, a consultant geriatric psychiatrist at the Nightingales Centre for Ageing and Alzheimer’s, Bengaluru. “My job doesn’t end with a diagnosis of dementia; rather, it begins with it," she says. “So much can be done to improve the quality of life for patients. We advise caregivers to observe a patient’s behaviour for six months before we make a diagnosis. This gives them time to accept the condition and understand that they’re embarking on a new journey." Counselling plays a critical role in managing the disease, but no one has any answers to how long an Alzheimer’s or dementia patient will suffer, or the years one must devote to selfless caregiving. Despite this, Dr Hegde says, learning to deal with the daily challenges and finding practical solutions can help ease the burden a great deal.

“We try to impress on caregivers that they should never force a patient to do something they may not want, but to explore the underlying reason for the patient’s stubbornness. If a patient resists during bath time, perhaps he/she is uncomfortable undressing in front of strangers. In such cases, we suggest they use a bathrobe and a loofah (so there is no direct skin contact). If the conflict is over adult diapers, we suggest lining their trousers directly with the pads." From cutting a patient’s nails to combing their hair, advice is available for every aspect of caregiving.

Most daycare centres attached to Ardsi and NMT are subsidized, costing ₹ 7,000-15,000 a month. The Silver Innings Foundation’s A1 Snehanjali, on the other hand, is a residential care centre, providing care 24x7 without subsidy. It costs, on an average, ₹ 33,000 a month, with a ₹ 3 lakh initial deposit. The cost includes food and medication.

Caregivers themselves must know when to ask for help, says Dr Hegde. They are offered counselling even after losing a loved one. But not all caregivers have access to residential homes and counselling.

“Delegate as much as possible. If you can’t find anyone to help with the caregiving, at least ensure there is help around the house," says Dr Hegde. Minimizing your own stress will ensure that your loved one receives the highest quality of care you can possibly give.