Songs for a king

Pop music has many instances of songwriters almost magically creating songs out of thin air. Paul McCartney, it seems, could literally compose songs in his sleep and famously claimed so when we wrote the Beatles tune, Yesterday. He said the inspiration for the song came to him in a dream.

Yet another famous pop song that arose out of a nowhere is Elvis Presley’s hit All Shook Up. According to legend, “Goldie" Goldhawk, one of the owners of a songwriting firm called Shalimar Music, vigorously shook a bottle of Pepsi and dared songwriter Otis Blackwell to write a song about it. Blackwell polished off the now famous track in no time. But then, Blackwell was no ordinary songwriter. In the annals of rock ’n’ roll, there are only a handful of names that can compare with him—Jerry Leiber and Mike Stoller, “Doc" Pomus, Gerry Goffin and Carole King… As his friend “Doc" Pomus once said, “He’s as close to being a genius as anyone I’ve ever met in the business."

Sadly, Blackwell is now merely a footnote in pop music history, though you may have heard many of his hits, without knowing the name of the composer: Elvis Presley’s Don’t Be Cruel, Return To Sender; Jerry Lee Lewis’ signature tune Great Balls Of Fire; Fever originally recorded by Little Willie John, and covered by countless artists including Peggy Lee and Madonna.

But perhaps, Blackwell’s greatest contribution to pop music goes beyond his oeuvre of songs. He can lay claim to being one of the primary influences in Presley’s vocal style. As was common practice in the 1950s, songwriters often made demonstration records of their tunes, and peddled them to publishing companies. More often than not, the musicians and the singers copied these demos note for note. Such was the case with Presley as well. Before he was signed by RCA records in 1956, his popularity was strictly regional and limited to the South. RCA’s reach played a key role in Presley’s global popularity. And some of his early hits such as Don’t Be Cruel and All Shook Up laid the foundation for his now distinctive vocal style with its quavering delivery and idiosyncratic inflexions that veered freely between high pitches and low bass notes. Listening to Blackwell’s demos of these records is a startling experience as they are almost indistinguishable from the released product.

Blackwell was born in 1931 in Brooklyn, New York and like many black singers and songwriters, was inspired by the blues. As he recalled in an interview in 1989, he grew up listening to blues singers Chuck Willis and Larry Darnell. But Blackwell was an anomaly among black singers of the time as he professed a deep love for cowboy movies and songs. Tex Ritter was his absolute favourite and when he was working odd jobs in the early 1950s in New York, he would often steal some time to watch his idol in action on screen. 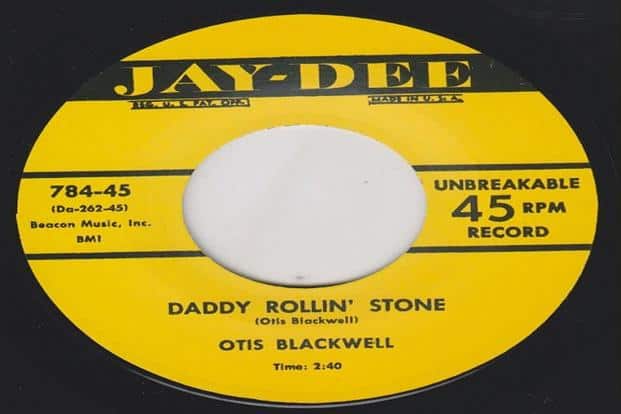 Blackwell was signed to the small Jay-Dee label, run by the famous music publisher and producer Joe Davis. His debut single was Daddy Rollin’ Stone in 1953. It featured Blackwell playing piano and singing in a preachy, gospel-inspired R&B style. Later, the British band, The Who, would release their hopped-up version as the B-side to one of their earliest singles, I Can’t Explain.

But Blackwell’s greatest songs feature his melding of black styles with the twang of Country & Western tunes that he loved. Perhaps that is one reason why he is one of those rare black songwriters of that era who almost exclusively wrote hits for white artists.

Like many others, Blackwell dropped out of the music scene by the mid 1960s after the arrival of the Beatles. He re-emerged after a decade when he released his album, These Are My Songs! in 1977. Amazingly, Blackwell and Presley never met in person. When he wrote and recorded The No 1 King Of Rock ’n’ Roll as a tribute after Presley’s death in 1977, one could never be sure whether it was also a sly way of boasting about his contribution to Presley’s fame. In later life, Blackwell moved to Nashville, Tennessee, where he died of a heart attack in 2002.