The best cities all have them. That indispensable website that tells you if Tate’s new exhibit is worth the schlep, and which nearby restaurants have the best chocolate pudding. Locals use them to scour bars, restaurants, venues and events, while tourists use them to gauge the flavour of a particular city.

In India, the booming number of Internet users (estimated at anywhere from 20 million to 40 million) has prompted a few individuals to launch local equivalents, vast digital repositories that attempt to organize and verify this mess of information. Some focus on food, others target female readers, while quite a few attempt to do it all. Here is a breakdown of who does what, and whether they deliver on their promise:

What it does: Reviews and rates restaurants, bars, bakeries and nightlife venues, with stores, museums, galleries, salons and more on their way. 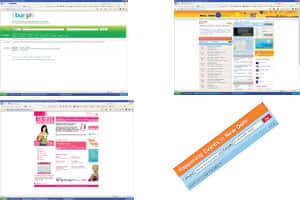 Click and pick: An extensive database, flashy design and smart searches make these websites handy for planning every minute of your leisure time.

Backstory: Started by California-born Deap Ubhi, who says Burrp was born out of frustration when, on a trip to India, he and his friends had trouble finding things to do.

“Most of the recommendations we got were from concierges and cabbies. It was very hard for us to get a dependable flavour of what was going on in the city," he says.

Ubhi and his friends began kicking around the idea of a digital database and, in March 2006, Ubhi quit his job at a private equity firm to move to India. About $2 million (around Rs8 crore) in seed money later, Burrp went live in August, and has since expanded to eight cities, with Goa, Jaipur and Chandigarh in the pipeline.

Verdict: Burrp bootstraps each new city website with about 1,000-3,000 listings. After that, the vibrancy of individual websites is determined by user involvement. The clean interface is intuitive and uncluttered, but the search engine yields often perplexing results. A search for “nightclubs" in Colaba brought up reviews for several restaurants and only two clubs. The website works best as a straightforward listings database, with up-to-date addresses and telephone numbers that can be sent to your cellphone.

What it does: Acts like a know-it-all friend, answering queries about restaurants, and bars, notaries and dry-cleaners. Has service-y articles that cover lifestyle, shopping and food.

Backstory: A search for a Bengali restaurant in Gurgaon prompted co-founders Shriram Adukoorie and Kiran Konduri to launch asklaila, the online equivalent of a trusted friend.

“One thing we noticed in India is that most local information is with friends and family. If you want to go to a restaurant, you call up a friend. If you want to throw a party for kids, you talk to a mum. There was no one place people could go," Adukoorie says. The pair was stringent about accuracy—Adukoorie says 40% of the information they found in the yellow pages was wrong—and so, every listing is verified and fact checked before being used.

Verdict: Adukoorie and Konduri pride themselves on the depth of information found on the website and, indeed, random searches for notaries, biryani tiffin services and 24-hour pharmacies brought up a wealth of listings. Unfortunately, because reviews are dependent on user feedback, a lot of the listings have none. Peculiarly, a search for sushi in Colaba failed to bring up Tetsuma or Tiffin. The articles are more targeted, and sample pieces include a round-up of Mumbai’s dresswallas, Irani cafes, and shop sales.

What it does: Gives a comprehensive picture of what is going on in eight cities with interactive communities and member groups.

Backstory: Started by Amit Saran, a former executive who worked with Nasa and Hewlett Packard before launching his own technology company. “What we’re trying to say is that there’s a lot more happening in town, and probably stuff happening close by," he says. “You probably don’t have access to that information."

However, rather than relying on users, Saran and his colleagues spent eight months cultivating relationships with venues, event managers, performers and sponsors, asking them to contribute event schedules. The idea was to expand coverage to obscure and small events that the mainstream media routinely bypassed. Since its launch last December, Buzzintown has racked up 400,000 unique users a month.

Verdict: Like Burrp and asklaila, the design is simple, and a little staid. That said, there is an exhaustive list of events that can be narrowed by date. The website reviews both events and venues, making it particularly useful to tourists and first-time visitors.

However, since the website is still in beta trials, several dozen listings remain blank. While Saran says Buzzintown gives readers useful information such as where to find parking spots or restaurants close to theatres/cinemas, I couldn’t find any listings that did, in fact, offer these tips. However, in a bit of prescient thinking, Buzzintown is starting e-tickets soon.

What it does: The Indian version of Daily Candy, a female-targeted biweekly newsletter that provides “what’s new and happening in Mumbai, Delhi, and Bangalore".

Backstory: Trips to India in 2005 prompted Americans Stacy and Dan Kerzner to start looking for opportunities to capitalize on India’s growing economy.

“We realized there were all these women who wanted to take advantage of the growing lifestyle space," Stacy says. “They wanted trusted recommendations to use their free time."

And so, Trendylicious was born—a newsy, gossip-y e-zine that tapped India’s female population. Though Stacy oversees the management of the website, her on-ground teams in India are responsible for the editorial content.

Verdict: If you can look past the hot pink theme, hokey illustrations and lack of images, Trendylicious does offer incisive and smartly curated editorial content. Girly phrasing aside, the website is a good way to keep up-to-date on beauty and fashion launches.