Susmita Mohanty, 39, was a visiting scholar at the US’ National Aeronautics and Space Administration (Nasa) and then worked for Boeing. Her partner, US-based Amaresh Kollipara, worked with Accenture. Educated in India, France and Sweden, Mohanty has multiple degrees (engineering, industrial design, space studies and architecture), including a PhD in aerospace architecture. Kollipara holds an MBA from the Graduate School of Business at Columbia University, US. 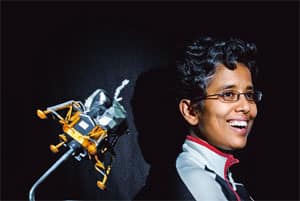 The company was formed in the US in 2008—Kollipara manages it now. Mohanty manages the Indian chapter started in June 2009, focused on tapping the international space market.

They have been successful in getting a reseller licence from Antrix. This allows them to purchase images from Isro (from India’s fleet of remote sensing satellites) and sell them to customers in the US.

E2O will be also be the point of contact for private Indian citizens who wish to travel in space.

The key to surviving in this business, according to Mohanty, is to keep the overheads low right from the start and dabble in several areas of the space business all at once. “Networking with the international space community is important and we have set up strategic alliances with four companies (Taneja Aerospace and Aviation, Semcon, M+W Zander and Liquifer)."

One of the biggest challenges has been getting funding. “Space business needs long-term commitment and investors usually look for quick turnaround and RoI (return on investment)."

But Mohanty is optimistic, and says the best part of setting up the business in India has been the access to the mentorship of some of India’s space pioneers, some of whom have worked with Isro and Hindustan Aeronautics Ltd (HAL).

The duo feel that India’s robust government space programme has laid the foundation necessary for the creation of future private space enterprise. “But what we need next is deregulation, privatization, financial ecosystems to support space ventures and space policy reform to enable Indian space companies to thrive at home as well as compete internationally," says Mohanty.

“The space business, unlike IT, takes a good five-seven years to mature. Things are starting to fall into place now," says Mohanty. She claims to have multiple launch customers lined up.

“To succeed here, you need infinite patience, tenacity and resilience to deal with bureaucracy and red tape," says Mohanty. Of course, your networking within the international space community has to be top-notch.