On the sidelines of the Salone del Mobile 2017, Aldo Colonetti, design theorist and former director of the European Institute of Design, speaks of trends that would have an impact on the design of the future

There is no design without functionality, no functionality without ethics," says Aldo Colonetti, a man notoriously difficult to define. Philosopher, professor at Politecnico di Milano, historian of art, design and architecture, former scientific director of the Istituto Europeo di Design (a leading design school with campuses in Milan, Rome, Turin, Venice, Florence, Madrid, Barcelona, São Paulo), member of the scientific committee of the Italian National Council of Design—Colonetti’s life has been devoted to the ever-changing field of design. During the Salone del Mobile in April, he presented Marmo (marble in Italian), a magazine brought out from 1961-71 by Italian marble quarrying and processing company Henraux, which had boomed in that era and is now making a return to the cultural debate on architecture, art and design. Seated in the café at the Triennale Design Museum, the Milanese temple of architecture and design, Colonetti spoke to Lounge about the materials of the future, the increasing focus on the social aspects of cities, and on architects working as activists. Edited excerpts from an interview:

Hi-tech seems to be the direction modern design is headed in, yet you bring back an age-old material like marble.

There is no such thing as an old material or a new material. Traditional resources like limestone, ceramics, glass, wood, stone continue to present incredible potential and are considerably linked to innovation and the future of architectural vision. Every century takes a fresh approach to construction. That is why you see so-called old materials combined with modern and scientific construction techniques. Ceramic, for example, has become an unexpected vehicle for new experimentation. Take the Vertical Forest, architect Stefano Boeri’s latest project in Milan, with another one coming up in Nanjing, China. Its walls have black ceramic panelling. It will certainly influence tower design in the decades to come.

Highly experimental research tries to find the right material for the project. Look at the recent construction of Indian temples across the world. The BAPS Shri Swaminarayan Mandir in London is an extraordinary example of elaborate use of marble, in particular Italian carrara and Indian ambaji marble, in enchanting ways to blend tradition with the contemporary landscape. Using the marble as a structural material is so modern. And yes, marble has recently been rediscovered and revived as a trend. 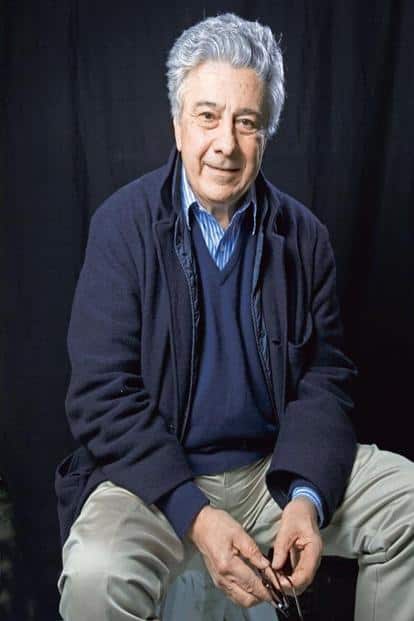 There are so many new materials being created for architecture. What are your thoughts on those?

Consider Litracon, a product developed by Hungarian architect Áron Losonczi by mixing concrete with optical fibre. Or graphene, a thin layer of pure carbon that is one of the thinnest materials ever created. Great ideas, but they still need time to enter the market, and to prove their structural properties to be as good as conventional concrete. While architecture has to support innovation, I think the primary goal is to enrich the human experience.

Nowadays private projects are often geared towards a public experience. Is this a new trend?

Community and collaborative design are playing an increasingly important role in the future of our cities. The director of the 2016 Venice Architecture Biennale, Alejandro Aravena, champions “participatory design", a multifaceted concept but it’s not entirely new. To some extent, it’s not far from the so-called participative architecture by Otto Königsberger (the German architect who worked as the chief architect and planner of Mysore state from 1939-48) or the architectural experimentation of Charles Correa, who built within the context of post-independent urban India. Yes, we are returning to an incremental approach and to social housing to tackle scarcity of means, but you have to consider that architecture has always been a collective practice. It’s an expression of needs from the government, private and community sectors. This also means that we cannot depend entirely on the community for answers, instead find out what are the right questions to ask, as architects have their own ideas and identities. It’s about coming up with a concept while being inclusive about the various aspects of social life. Look at Oriol Bohigas’ participatory urbanism in Barcelona (Bohigas was the chief planner of the Spanish city and responsible for its modern, inclusive plan) and Italy (he developed the urban plan of the southern Italian city of Salerno). Or look at Rahul Mehrotra’s Kumbh Mela: Mapping The Ephemeral Megacity (a 2013 book on the temporary infrastructure that comes up during the Kumbh Mela in a highly democratic and organic way). I do believe that in the future we will see more and more landscape recreations as well as the social activism of architects.

In terms of social health and wellness, how are architectural and industrial design mixing holistic experiences with customer expectations?

As I said, there is no design without functionality, and no functionality without ethics. Design has to be at the service of the community, experimenting with new ways of solving human problems. I admit that a number of approaches come under this definition. In a building, some architects consider staircases over elevators to promote physical activity, or plan a fitness centre with a wellness area. Apartment living in recent years focuses increasingly on bigger common spaces, designed to accommodate gatherings. Designers need to meet the challenge of a rapidly ageing society—avoiding isolation, supporting healthcare centres, promoting accessibility to mobility aids. Design is for humans, not only for users, so it also means products for left-handed people, cutlery for kids, room to accommodate those with special needs. There is an international association focusing on this aspect, Design for All Foundation, which exists in India as well.

The Massachusetts Institute of Technology (MIT) unveiled a 3D-printed optically transparent glass during the Milan Design week. How strongly do you think digital fabrication is going to affect the future of architecture and design?

The MIT research unit Media Lab, with architect Neri Oxman at the helm, presented a series of 3D-printed glass lighting structures that hint at the capabilities of printed objects. 3D technology allows one to easily draw up plans, test and provide new solutions in quality control and safety. However 3D products cannot be mass-produced as of now. That requires heavy investments, so I don’t think there’s going to be a demise of mass production.

Also, this year at the Salone, we saw references to worldwide traditional folk-craft objects and historical objects. We observed that there was a tendency to rework specific pieces from the past, like the 932 chair by Mario Bellini for Cassina, or historical pieces from Gio Ponti. Yet it’s not a matter of plain historical revivalism. It’s a way of interpolating the past effortlessly into the present. It’s a matter of celebrating the plurality of local heritage and environment. That is something that Italy shares with India, and it’s an extremely valuable trait.

What, in your opinion, is the future of Indian design?

I’m not an expert, but we see a generation of young, home-grown talent like Ashiesh Shah, focusing on everyday objects, a contemporary use of local and natural materials, and a strong balance between traditional aesthetics and functionality. From the Milan Design Week, look at the work of Nipa Doshi and Jonathan Levien with Moroso. Or the Scarlet Splendour studio that presented a unique blend of Indian craft and Italian twist at Spazio Rossana Orlandi, the famous independent design showroom.

They point to the future of Indian design. Ikea’s first store in India may have an impact, not only on furniture, but on how we consume design at large.