The American author despairs tirelessly about the impossibility of morality

Jonathan Franzen once said about his fiction writing that he engages social elements not to reach for the important political novel as much as to complicate the lives of his characters. The investment in the socio-political has been gradually scaled up over the years, and Purity is pure indulgence in this regard. So much so that he greatly expends the humanity and motivations of his characters in service of these elements.

In his latest, Franzen despairs tirelessly about the impossibility of morality—the author plies this generation’s big debate about information technology and privacy to an imperishable literary theme. It is something of a fictional extension of The Kraus Project (2013), in which Karl Kraus became the vehicle for Franzen’s argument against the supremacy of technology in media today.

The story follows Pip through various portals of secrecy, leading her away from her comically tragic circumstances, set in the sleepy and eccentric communities of the San Lorenzo Valley and Oakland, California. 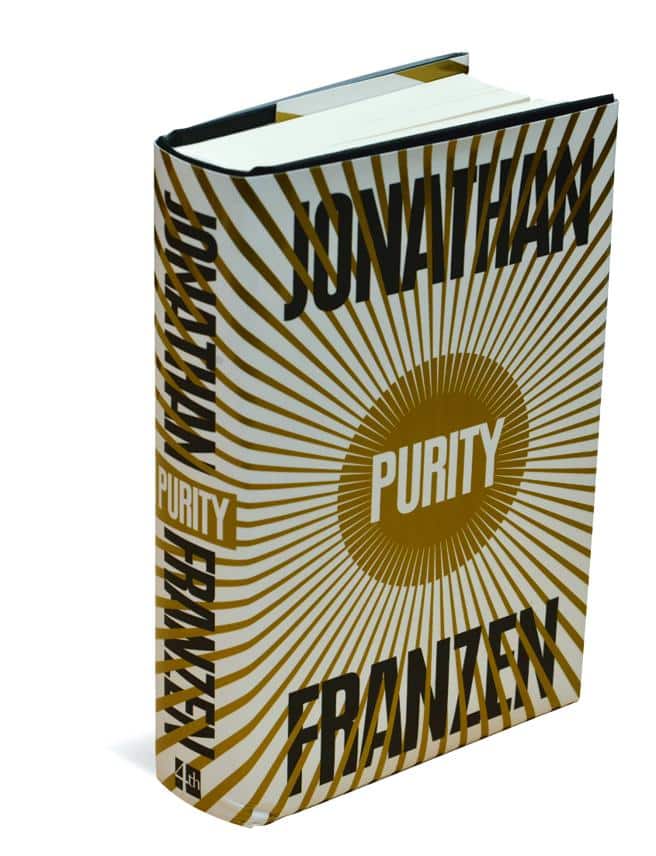 In Cold War Germany, living on the East side of the wall, Wolf ends up as something of a vagrant, living in a rundown church and offering counselling to young wayward girls—many of whom he sleeps with (although, laughably, he has principles when it comes to which ones). Severe punishment for his one act of subversion against the communist regime is averted by his stepfather’s favourable position in the administration. Wolf’s grave transgressions are only known to the reader and two characters who are embroiled in his mess.

Franzen links up Wolf’s journey of secrecy with the fall of the Berlin Wall and Stasi, the secret police, scampering to get rid of secrets that might be incriminating—evocative of the US National Security Agency leak (2013) and the Arab uprising (2011). Then there is a crime of passion, a murder, which Wolf neatly buries before he finds solemn purpose as the founder of the Sunshine Project (much like WikiLeaks). This aspect of Wolf’s arc burns with Raskolnikov-ian turmoil. His association with Pip’s estranged father, Tom—who is the keeper of Wolf’s sordid secret and the founder of a ProPublica-styled investigative publication—is an important connection through the novel.

The storyline following the relationship between Pip’s parents, Anabel (Penelope’s former, given name) and Tom, is rather tedious. With Anabel’s character, Franzen at first seems to be satirizing the rich and privileged—specifically their unrealistic brand of idealism that is inaccessible to the middle class. But reading these chapters is akin to observing Franzen frustratedly knit a sweater, the soporific labour of every loop. Anabel is also portrayed as the incorrigible feminist—a key facet of the idealism that led to her rejecting her billionaire father’s dishonourable money. She forces Tom to fit into her incredibly acute definitions of what is correct. Franzen charges Anabel’s feminism with this relentlessness and deviance, which comes off as rather disconcerting and contrived. There are also the in-between loves, escaping our ever-expanding sexual and romantic spectrum.

Most of Franzen’s characters are dodging moral opprobrium in one way or the other, and the exposition of each one of their burdens is part of this grand social novel.

Then there is a character reserved to air Franzen’s very personal grievances—played out by the briefly present character, Charles, through whom the author takes a jab at critics (particularly the one he reviles most: Michiko Kakutani). A meta moment of note is when Franzen mentions Charles’ ambition to pen an opus, particularly in length. I like to believe that this is reflective of Franzen’s self-awareness because this novel stays in the aspirational stage, and fewer pages and issues would have done it some good.

The idea of new-age Internet gods, explored through the character of Wolf, is better told through tighter non-fiction narratives like Alex Gibney’s We Steal Secrets: The Story Of WikiLeaks, or Larissa MacFarquhar’s New Yorker essay, Requiem For A Dream, which depoliticizes the death of Swartz. The deification of these men has been put under a fair amount of valuable scrutiny, making Franzen’s project somewhat bromidic.

Each character’s grasp on this non-existent purity, their life’s pursuit to painfully serve and live by those principles, is a wasted one, because it’s essentially a cover-up for their transgressions in trying to perform the ideal.

Pip is the only one who is removed from the deeply fabricated realities of the other characters. All she really wants is to pay off her loan and cover some expenses from her mom’s inherited trust fund. She is fine with the vagaries and sometimes unfortunate negotiations that are involved in getting through life, and that makes her purely human.