Preview | Getting the formula right

Preview | Getting the formula right

Even before a single Formula One (F1) car sparks its ignition in Greater Noida, on the outskirts of Delhi, for the inaugural Grand Prix (GP) of India, there will be a colossal battle waiting to be fought around the event: The logistical nightmare of flying in the race equipment to the city, and then transporting it to the newly built Buddh International Circuit.

The 12 F1 teams, all based out of Europe, will arrive in their own jets, carrying anywhere between 100-200 staff and their equipment. Five Boeing 747-400F aircraft will bring in 24 racing cars, two for each team, along with spare engines, chassis, other car parts, tyres, race-specific gadgets, computers and sensitive telemetry equipment that connects the on-track racing staff and drivers to their European headquarters in real time. More than 600 tonnes of cargo is expected. 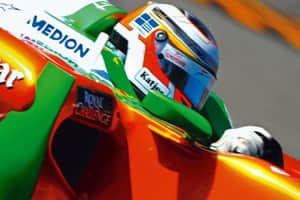 Perhaps not surprising then, that the logistical details of an F1 race are often compared to a military campaign.

This massive movement of people and machines pales only in comparison to the effort that went into building the Buddh International Circuit. The 5.14km track was designed by Hermann Tilke, the German track designer who enjoys a monopoly in F1, and built by the Noida-based Jaypee Group, a construction company which acquired the rights for the race in India. More than 6,000 workers and 300 engineers were employed to build the track and arena, which is spread over 850 acres, and will house around 120,000 spectators. Jaypee Sports International Ltd (JPSI) spent close to ₹ 1,800 crore on the project, which includes paying licensing fees to Fédération Internationale de l’Automobile (FIA), the sport’s governing body.

“The size of this project is the first of its kind in India," says Narain Karthikeyan, who was the first Indian driver to race in F1 in 2005, and is now a part of the Hispania Racing Team. “It’s a huge step for motor sports in India."

Sameer Gaur, managing director and chief executive officer of JPSI, backs this assertion. “Till now, there was no infrastructure like this in India, and everything starts when an infrastructure is made and when big groups and companies get into these things. A lot of opportunities can come up in the next one-two years. The outcome can be huge." 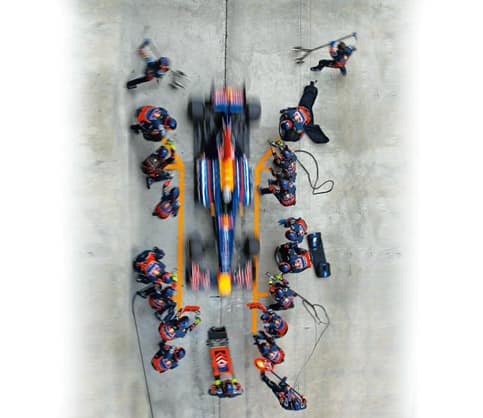 Meals on wheels: The Grand Prix of India may change the status of motor sports in the country, encouraging companies to fund the fledgling sport. Photo by Corbis.

India with its rising economy and phenomenal growth potential is but a natural progression.

Indian F1 driver Karun Chandhok, who races for Team Lotus, says India already has an established and growing market for the sport, and the timing is perfect to build commercially on that platform.

During the 2010 Fifa World Cup, the biggest sporting revenue generator in the world, around $1 billion (around ₹ 4,900 crore) was generated over 30 days for the hosts South Africa.

F1 races are also watched by over 500 million viewers on TV, preceded only by the Fifa World Cup. ESPN, which broadcasts F1 in 24 Asian countries, says it sold advertising space at the rate of Rs1.5 lakh for a 10-second slot.

The impact of F1 is best understood by Bharti Airtel’s decision to drop its sponsorship for the Champions League T20, despite cricket being the pre-eminent sport in India, in favour of the Grand Prix of India.

“The deal (Airtel is title sponsors of the Indian GP) meant three things to us," says Mohit Beotra, head, emerging business, Bharti Airtel. “One, it would forever be remembered as the company that got F1 to India; two, the F1 equity of precision engineering, dynamism and speed would rub off on us too; and three, it would put us on the same pedestal as the other global brands who have sponsored F1 earlier."

Beotra points out that F1 will be relevant in India given the 14% growth in 2009-10 of the $40 billion sports marketing business (sports, sports entertainment, sponsorships and sports goods retailing) in the country.

“Our association with Formula One in India is a strategic step towards strengthening our brand positioning and appeal to our target audience that is youthful, vibrant and enjoys the F1 adrenalin rush," he says.

Mercedes-Benz, the official automobile partner for F1 in India, will be spending ₹ 12-15 crore on the marketing activities around the event. “People know us as a luxury brand. The sporty part of the brand has not been unleashed," says Debashis Mitra, director (marketing and sales), Mercedes-Benz India Pvt. Ltd. “We provide the engines in the Force India team, McLaren has our engines. So we will leverage this opportunity to strengthen our brand perception in the country."

Foot on the pedal

Is motor sport set to gain as much mileage as corporate houses with India on the F1 calender?

“Oh my god, yes," says Vicky Chandhok, president of the Federation of Motor Sports Clubs of India (FMSCI), and Karun’s father. “It will project India as a country which can handle a sporting event of this calibre. It will project the technological prowess of India, because F1 is the most technologically driven sport in the world."

Karun, who has been liaising with the FIA on JPSI’s behalf to make sure teams have everything they need during the race, and has also been testing the track through its various stages of development, believes watching the sport live will be a big influence as well. “It’s different from watching it on TV," he says. “The sound, the speed, just the sheer skills of the drivers, it’s insanely impressive. Maybe aspiration levels will go up, more people will take to the sport."

Many manufacturers have sent proposals to set up racing schools at the Grand Prix facilities as well, hoping to ensure a future for the sport in India. Mercedes has already finalized plans for setting up a driving academy, their third after China and the US, to provide training for aspiring racers.

“Some of the drivers we will bring in as trainers will be former Formula 1 drivers," Mitra says.

JPSI is already planning ahead to make sure their circuit is well used throughout the year, and not just for the annual F1 race. “We are in initial stages of talks with MotoGP (the world’s premier motorcycle racing event) and we aim to hold this in 2012," says Gaur.

Motor sports drivers and enthusiasts in India also hope that the sponsorships for the GP will also extend to competitors and drivers in the country as the sport catches on.

“Of course, we hope that companies will relate more to the sport," says Karthikeyan. “But that has not really happened in China. So we have to wait and see."