Anoop Prakash | Man behind the machine

Anoop Prakash | Man behind the machine

On a steamy August afternoon in New Delhi, Anoop Prakash, managing director of Harley-Davidson India, allows himself the luxury of a cold glass of Stella Artois beer in the middle of a working day. Prakash, 38, is wearing blue denims and a shirt that has the Harley legend emblazoned across the chest. He’s 15 minutes early for an interview he kindly consented to do at less than 24 hours notice.

Perhaps this promptness comes from his years as an officer in the US Marine Corps, where he was once deployed to Kosovo at a day’s notice. “Check your weapons and gear, take care of your affairs as well as you can and get on to a C-130 to Kosovo," Prakash recalls. “We had no idea what the briefing was, or how long we would be there. Even though that’s what we are trained for, it was still crazy going through it."

Clearly, the maker of such formidable and iconic bikes as the Fat Boy and the Iron 883 needed an equally formidable man to push through its ambitious plans for India.

“I’ve always been interested in places of excellence, and the excellence you see in the Marines is second to none," Prakash says. “So it was a personal challenge. I wanted to see if I could do it. Joining Harley was no different, and bringing Harley to India was no small job. I felt like I could make a difference."

That bit about excellence is neither an empty boast, nor an exaggeration—Prakash, whose parents emigrated to the US in 1968, went to Stanford University as an undergraduate, and to Harvard Business School for an MBA after his stint with the Marines. He was a consultant with McKinsey & Co., one of the world’s leading management consulting firms, from 2001-03 and worked as deputy chief of staff to the secretary of housing in 2008-09, the final year of the George W. Bush administration, a time when the US government was trying to recover from a spectacular housing crash. Hot wheels: Prakash says Harley is getting a lot of customer feedback so they can tweak their bikes to make them more relevant to the Indian market. Jayachandran/Mint

“I was a perfect fit," Prakash says. “I had this affinity for coming to India, and I have a background in strategy, business development and government affairs—which is exactly what you need when you are setting up a business in a new place."

Harley-Davidson, in fact, opened the door to the recent spurt in high-end bikes in India. In the past three years, Honda, Yamaha, Ducati, Aprilia, BMW, Triumph, and every major bike manufacturer in the world has entered the Indian market. And Harley’s story begins with mangoes.

In 2007, the Union government decided to lift emission norms on over 800 cc bikes to allow Harley-Davidson (their bikes are all over 800 cc) into India, in exchange for the export of Indian mangoes to the US. This also paved the way for other superbike manufacturers to bring in their high-end 1,000 cc-and-over bikes into India.

“Harley had planned to be in India since early 2005," Prakash says. “So it’s not a reactionary strategy to the economy, this was long-term thinking."

India also has the distinction of being the first country Harley entered as a fully owned subsidiary, offering the full range of bikes—in all other international markets, distributors were put into place first.

“What we’ve done, along with some of the premium car makers, is brought this idea of lifestyle in the automotive industry—a sense of leisure and adventure—and I think it’s only now that the idea is truly taking shape," Prakash says.

In January, the bike maker took the next leap in the Indian market, opening an assembly plant in Bawal, Haryana, bringing into effect the complete knock down (CKD) policy, where the parts are imported into India at 30% import duty and then reassembled, bringing down the price of the cheapest bike to ₹ 5.5 lakh. At present, the assembly plant, which is only the second such factory Harley has set up outside the US (after Brazil), produces three of Harley’s Sportster models—the Iron 883, the SuperLow and the 48—and over 250 bikes from the plant have already been delivered. Though Harley refused to divulge sales figures for 2011, data collected by Mint from four of the company’s five dealers shows that the company has sold around 1,200 bikes so far. “There’s a six-month wait for the SuperLow right now, and a three-month wait for the Iron," Prakash says. “The orders are coming in much quicker than we can make them." 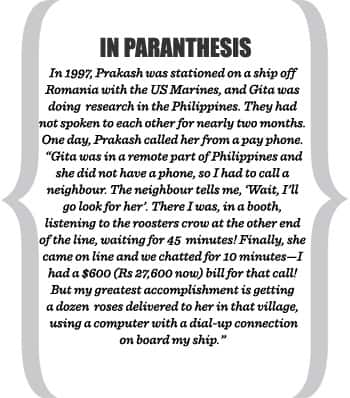 “We are still learning what customers here want, and we are developing customization kits," says Prakash. “If customers are looking for Harley engines to work with and create their own custom bikes, we’ll help them. It’s what people have done with Harleys forever—they’ve taken the V-twin engine, arguably the best heavyweight motorcycle engine in the world, and built their bikes around it—and that’s what we would like to see happen here. It would be the next step."

Prakash himself does not own a bike, and never has. “I have a fleet of 20 to choose from in my office here, so I really don’t need to buy one," he says.

Outside work, Prakash and his wife Gita, who have been married for 10 years and have two daughters, are devoted to good food. Both Gita, who is on the faculty at Johns Hopkins School of Medicine, US, and is doing research in India, and Prakash inherited their love for food from their parents. Prakash learnt cooking from his father, and when Gita’s father was introduced to Prakash, he took the young couple to a traditional sushi restaurant in California.

“I felt that he was testing my mettle through food," Prakash says. “I knew from then on that food will play an important role in our relationship!"

When the couple go on holiday, they plan their itinerary around meals. Their favourite culinary holiday was in Madrid, Spain, around five years ago, and they swear by Andrew Dornenburg and Karen Page’s book Culinary Artistry, which focuses on flavour combinations.

“At home we cook in a lot with our children," says Prakash. “Now in India you can increasingly get access to really good organic produce."

How does the former Marine balance his fitness with his love for gourmet food?

“Well…I was in the Marines 12 years and 12 pounds ago," he says sheepishly.