The first three or four times the bus drives past me I only feel mild bemusement at the driver’s desperation. It is a miserable day in Belfast, and there is a chilling wind blowing across the city’s Titanic Quarter, wreaking havoc on my dry skin. The air swirls around, unhindered, over derelict shipyards and abandoned dry docks, the husks of Belfast’s past. I am walking up Queens Road after having spent several hours at the spectacular new Titanic Belfast museum-cum-attraction-cum-amusement-centre. It is not a particularly long walk—I can just about spot the old offices of the White Star Line a mile or so away where I am headed to next—or an unattractive one—on my right, two gargantuan gantry cranes, stencilled with the “H&W" of the Harland and Wolff shipbuilding company, loom over the post-industrial skyline.

It is a walking route lovers of engineering, history and pneumonia will savour.

This stretch of road is part of Belfast’s official “Titanic Trail" walking route, marked by lively yellow and green signposts. But this afternoon, I am the only adventurer on it. There is a continuously moving rank of taxis outside Titanic Belfast that rush visitors to and from the newly opened venue. Not even the usually storm-proof Chinese tour groups stray outdoors more than they have to. 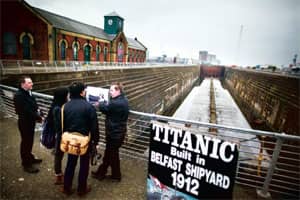 In the history of shipbuilding this is hallowed ground. At least for a short part in its history this was the Silicon Valley of naval engineering, the Baton Rouge of shipbuilding. Here one of the greatest shipbuilding companies in the world made some of the greatest ships in human history, employing, at one point, 35,000 people. Between 1908 and 1914, Harland and Wolff made three of the world’s largest ocean liners for the White Star Line. Indeed, as guidebooks, films and museums tell us over and over again, they were three of the largest moving man-made objects ever built: the Royal Mail Ships Britannic, Olympic, and, most famous of all, Titanic.

This April it has been 100 years since the Titanic struck an iceberg and sank, via the sea, into legend and myth. It went down with more than 1,500 passengers on board. If you don’t count losses at sea from the two world wars, the Titanic is still among the worst maritime disasters on record. But that by itself is insufficient to explain the Titanic’s enduring position in human memory. The horror of death at sea and the scale of the disaster are not exceptional enough to explain the books, films, memorials and cultural curiosities that have sprouted all over this tragedy like countless anemones.

So why are people obsessed with the Titanic?

The people of the city of Southampton have adequate reason to remember. After being built and fitted out splendidly in Belfast, the Titanic would sail to three more destinations before finally leaving for New York: Southampton, where she picked up crew, Cherbourg in France, and Queenstown, now known as Cobh, in Ireland, where passengers boarded, before finally sailing into the open sea on 11 April 1912. In total, 699 residents of Southampton signed on to work on the Titanic, around half of them natives with family. Other locals boarded as passengers.

Visitor attraction: An image of the Titanic’s wreck at the Titanic Belfast museum-cum-attraction-cum-amusement-centre. Peter Muhly/AFP

The city lost a staggering 540 residents in the tragedy, almost a third of all losses. The thick smattering of red dots is heart-breaking. The woman at the visitor information counter inside the Southampton Civic Centre tells me that the Titanic touched everybody’s lives. “We lost an entire generation of people," she says, fidgeting with a credit card machine. “These days the schools really drill that story into our children here." Around her are stacks of brochures and flyers for, literally, dozens upon dozens of Titanic-themed events. Like Belfast, Southampton too is going Titanic-crazy this year. I buy from her a map for a self-guided Titanic walking tour that costs £1 (around ₹ 80). It is really the kind of thing they should put up on a website as a free PDF.

The SeaCity Museum is a brisk 10-minute walk from Southampton Central railway station and abuts the eastern end of the city hall and civic centre complex. If Titanic Belfast is a triumph, then SeaCity must make do with a pat on the back and a sympathetic hug. Clearly the designers have had to work with less space and much less money. The current temporary special exhibition titled Titanic the Legend, housed in a posh new extension to the pre-existing space, is a somewhat juvenile collection of objects, multimedia and interactive screens.

This is a peculiar problem with many museums in the UK. The tendency to either target children and treat them like adults, or target adults and treat them like children. This is particularly an issue in small museums with limited collections that try too hard.

On the seabed: Visitors look down on a projection showing images of the wreck of the Titanic.

The Southampton’s Titanic Story exhibition works because of its tight narrative. The designers talk about the city and the ship from the perspective of actual crew members on the ship: their origins, their jobs, their social contexts, and their stories on the ship itself. This riveting narrative, if you will excuse the pun, also begins to shed light on the Titanic’s universal appeal.

Or rather the tragedy’s.

It is easy to see the ship as a microcosm of early 20th century Western society. Many of the crew members and third-class passengers came from bitterly poor backgrounds. Some were on their way to New York in search of a new life. This was still a time of outward emigration from the UK. At the same time, the ship was also packed with wealth, none more so than American millionaire John Jacob Astor, the richest passenger on board. Astor, it is believed, died when one of the ship’s funnels fell on him. He was also one of the few dead whose bodies were recovered.

Third-class passengers paid up to £9 for a ticket, a month’s wage for many of them. Tickets for a luxurious parlour suite in First Class cost an eye-popping £870. Adjusted for inflation, that’s around $100,000 (around ₹ 51 lakh) in today’s money.

Southampton experience: A visitor to SeaCity Museum looks at a board showing the number of crew lost on the Titanic. Photographs by Matt Cardy/Getty Images

But what later turned the Titanic into something of a minor beacon for social reform was the stark difference in the mortality rates for passengers in the various classes. Out of 30 children in first and second class, only one died. Fifty-two of the 79 children in third class were lost.

During the subsequent British inquiry carried out by Lord Mersey, not a single survivor from third class was asked to stand witness to what took place on the ship. The presentation of the Lord Mersey inquiry at SeaCity, in the form of a mock courtroom integrated with video screens, is exceptional.

A picture of the grand staircase at the museum’s exhibition. Photographs by Matt Cardy/Getty Images

Later, after a quick lunch at the SeaCity café, I embark on the self-guided Titanic Walking Tour bought at the visitors’ information counter. It is a cleverly put together itinerary, connecting a handful of small and large monuments to the various dead: musicians, engineers, crew, firemen, and so on. This being the season of Titanic hysteria, each monument is well-laden with bouquets, wreaths and votive candles. Many of these have been placed by members of Titanic societies all over the world in Southampton for the annual Titanic convention.

Relatives waiting on a railway platform as survivors of the Titanic arrive at Southampton on 29 April 1912. Topical Press Agency/Hulton Archive/Getty Images

Standing outside Canute Chambers is inexplicably moving. There is nothing to see except a small plaque. A bus stop obscures much of the view of the building’s facade. But still, on a cold Southampton afternoon, you can feel the accumulated sorrow and futility that thronged there once.

There is plenty of Titanic all over Southampton, unlike Belfast. In fact, as one local Belfast bus driver told me, “There is nothing much in Belfast at all besides all the Troubles and that new Titanic museum." Most people, he told me, come to Belfast for two or three days and then spend all their time doing day trips, especially to the spectacular Giant’s Causeway up north.

For years, Belfast was at the heart of sectarian violence in Northern Ireland. Which may have something to do with the fact that the city is still coming to terms with peace and the idea of “business as usual". The Titanic Quarter, explains the audio tour I bought from iTunes, is now undergoing a £7 billion regeneration programme.

But that is the highlight of a tour that quickly loses steam, eventually pointing out an outlet of Debenhams as a local landmark. The Irish accent on the audio is good, but not that good.

The Titanic Belfast, however, is superbly executed. The restaurants and gift shops are all packed as I stand in line to enter a remarkably engaging series of displays, interactive elements and even a short ride that simulates life on a shipyard. While SeaCity focuses on the human aspects of the tragedy, Titanic Belfast approaches it, understandably, from a more industrial and engineering perspective. Which allows them to make the experience substantially more immersive without descending into the morbid.

Yet, when I come out of the superb building 3 hours later, I am conflicted. Titanic Belfast is an exhilarating amusement experience. All around me, visitors are clearly having tremendous fun. Families line up to buy boat-loads of T-shirts, posters and caps at the gift shop.

It all seems like a bizarre way to celebrate 100 years of a terrible tragedy. But then why am I having so much fun?