Home / Mint-lounge / Tides of the Sabarmati
Back
Share Via

Tides of the Sabarmati

Tides of the Sabarmati

At the end of December, InterArt, Darpana Academy of Performing Arts’ annual Vikram Sarabhai International Arts Festival, saw something unusual in Ahmedabad—Amdavadis of every demographic attending a multimedia performance called Kadak Badshahi. It was a departure from the norm at a festival that attracts only the art-inclined.

The festival’s theme, “600 Not Out", brought together Ahmedabad’s artists and performers for a grand show to commemorate the city’s 600th anniversary this year. The organizers knew of its appeal, and ran it for all three days of the festival. Kadak Badshahi, named for the masala-laden, strongly brewed tea befitting a king—for which the city’s kitlis (mobile carts) are famous—ended Ahmedabad’s 2010 on a high note. Dynamic city: Sultan Ahmed Shah founded Ahmedabad in 1411 on the banks of the Sabarmati. Phil Cheatle/www.flickr.com/photos/philsframe

It was cosmopolitan within a century of existence, Gujarat’s prime city by the 18th century, and later, a mill city, the “Manchester of the East". It then became one of the focal points of India’s freedom movement as Mahatma Gandhi’s headquarters. Today, it claims to be the nerve centre of the country’s self-claimed “growth engine".

Casting an insider’s eye at Ahmedabad’s past and its contemporary history, Ahmedabad: From Royal City to Megacity by Achyut Yagnik and Suchitra Sheth is packed with details and analysis, connecting the dots that have been missing so far in other sources. True to its tag line, it begins with its royal antecedents, moving into the religious and cultural influences and their amalgamations, socio-political shifts, personalities, lifestyle, natural disasters and other turning points. 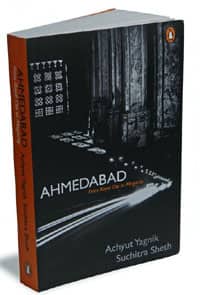 One of the book’s most notable aspects is its expansive view of the organized merchant guilds that existed in Gujarat as early as the 11th century. The authors explain in detail how these benevolent mahajans of Ahmedabad came to be a parallel power structure, and their counterparts and the artisans’ association, known as the panch, lost well-established rights and privileges over a period of time. Yagnik and Sheth do not shy away from tackling controversies, especially myths manipulated for political gain, such as the origin of the name “Karnavati", or the conditions that led to the riots of 2002. By the time we finally arrive at “megacity" Ahmedabad, we discover that beyond the sheen of its “vibrant" status is a city divided. By this point, we know why.

Yagnik and Sheth, also co-authors of The Shaping of Modern Gujarat: Plurality, Hindutva and Beyond (Penguin, 2005), present an exhaustive bibliography of the sources they have used to construct the story of Ahmedabad. This may demonstrate why the book sometimes becomes indistinguishable from a biography of Gujarat. Tighter editing could have ensured less repetition of information in the first half of the book; a glossary would have helped with the inconsistent translation of non-English words. A glaring omission is that of a historical timeline, a huge aid in books that cover an epochal time span.

The book is comprehensive, but it lacks literary delight, unlike, say, Giles Tillotson’s Jaipur Nama (Penguin, 2006). To be fair, the latter is limited in scope and the period it covers. But the narrative craft that could have enlivened the narration of Ahmedabad’s story is missing in Ahmedabad: From Royal City to Megacity. There is a faint attempt towards it on the back cover, with the reproduction of M.F. Husain’s drawing from Amdavadni Gufa.

Regardless of the forgivable slips, many parts of the book will connect with Amdavadi insiders, and there is plenty here for everyone who wants to know the city, particularly more than its mills-to-malls story. With Ahmedabad stepping up its pitch for the Unesco World Heritage Site status this year, this book gives us some good reasons to support that claim.

Vinutha Mallya is an editor with Mapin Publishing.