One of the most popular first person action game series, Uncharted, is now available on mobile devices in a slightly different avatar. The new edition, Uncharted: Fortune Hunter, puts the game’s protagonist Nathan Drake in a series of mysterious chambers filled with danger. The objective is to dodge the hurdles, look for the clues and get to the treasure. We take a look at how the entire experience pans out on the smaller screen. The entire game is charted out on a hand-drawn map where you can see your progress and what lies ahead. The game spans over 200 missions. While the first few missions are simple and also accompanied by tutorials, the going gets tough as the game progresses.

Look out for the dynamites, the hidden darts or the big rocks blocking the way. You can direct Drake to lift and displace the rock out of the way, while dynamites can be detonated by simply firing at them from a distance. The dart traps mostly come from red coloured turrets, so avoid them. In case a step is missed, the trick is to look for the clue that can restore the tile and connect the path again. 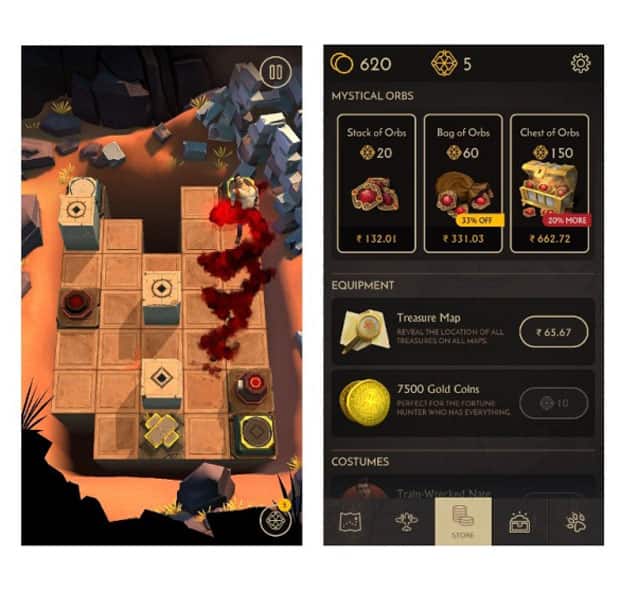 The game offers freebies or weapons which come as rewards after completing a few set of missions. But true to the “freemium" roots, the game developers let you buy more of these on the store with real money. The smallest stack of 20 orbs cost ₹ 132, while a stack of 150 costs ₹ 662. You can also buy new costumes for Drake from the in-game store, but these can be purchased only with the coins won by clearing the missions. The interesting bit is that this game allows users to link to the Sony PlayStation network and use the rewards earned in the mobile game in the upcoming Uncharted 4 game for the Sony PlayStation 4 console and PC.

The game looks more animated than realistic unlike the Uncharted series available on console. The game offers top down view with a fixed camera. But then again, it is clear that the idea is to keep the size in check by offering simpler graphics and not stress the hardware on phones.

For an Uncharted series fan, this new gameplay may be a bit too simple. But for someone looking for a fun action game that involves more brains than brawn the Uncharted: Fortune Hunter is a solid adventure game with long gameplay and fun-filled missions. It is one of the best adventure games you can get on the mobile platform. It’s free to download, takes up less than 150MB after installation and doesn’t ask for full-time internet connection to run. You will need a moderately powerful smartphone to run this.