Days ago when I spoke with Nageen Tanvir about her father’s health, she said he felt that his time had come. I told her to tell him, it hadn’t. I don’t know if she did, but I was wrong. 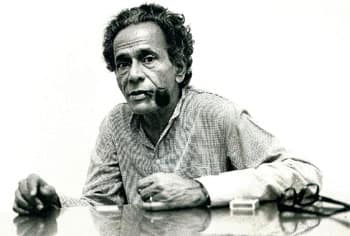 Pioneer: Tanvir was working on his autobiography when he died on 8 June in Bhopal. Photographs courtesy The National Centre for Performing Arts (NCPA) Library

He lived a full life, worked till his last days, followed his passion to glory and never settled for less than he could dream of. Maybe he could afford to go. But we can ill afford the loss.

Tanvir became a legend in his lifetime for his contribution to theatre, but when you watch Agra Bazaar, Charandas Chor and Gaon Ka Naam Sasural Mor Naam Damad, it is unlikely that you will see the weight of the legend—you will only see a thoroughly entertaining play. In a conversation, he once said to me that a director should ideally be invisible. Such was the slickness of his craft that the imprints of his genius would never smudge his work, only illuminate it from within.

Similarly, it is not easy to see the extent of theatre’s debt to the man. Post-independence, the country was rife with new ideas, new thoughts and writing. But Indian theatre was in the grip of a colonial hangover, churning out plays that borrowed from English traditions and catered to the rising middle class. In this climate, Tanvir formed his Naya Theatre with wife Moneeka Mishra in 1959. Having trained in India and Europe, Tanvir’s foundations were diverse—but the impact of Bertolt Brecht was singularly important.

On his return to the country, Tanvir began his search for a new idiom in theatre. Taking off from the kind of theatre prevalent at the time, he travelled both into the past and the future, to look for ingredients. Bringing together folk artists from his native Chhattisgarh region, he devised a new form incorporating the modern trends of the West. His experimentation didn’t stop at that. Soon he realized that to maximize the potential of his new actors, he must let them speak their own language. He also did away with the formal blocking of movements and plotting of lights, making space for more improvisation. In the second stage of innovation, he introduced elements of Pandvani and Nacha, local singing and theatrical traditions, to tell tales by voices as diverse as Shakespeare and Tagore. He didn’t just resurrect a dying art form, he reinvented it.

It was not the form alone that benefited. Actors from Tanvir’s troupe were mostly tribals struggling to make ends meet through labour or by tilling the land. Tanvir brought them fame, means of sustenance and most of all, dignity. He took as much as he gave to them. More importantly, he always acknowledged that. Meagre grants from the state and Centre helped him carry on with his artistic mission. But post-Babri Masjid, Tanvir’s Ponga Pandit was attacked by Hindu hardliners. In truth, it was a satire against untouchability that had existed in folk traditions for years before Tanvir picked it up. The government of the time, with its saffron agenda, made him grovel for the grant that was his due and finally, abruptly stopped it. When I spoke to him about this, he wasn’t daunted, just quietly determined to fight the system and put forward his ideas for the kind of support theatre in general needs from the government. 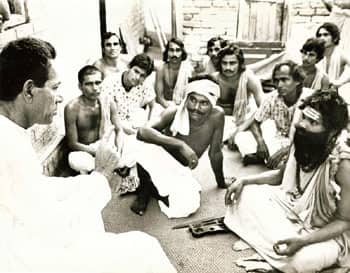 I saw that trademark quiet determination shake but rarely. Once, a couple of months after his wife’s death, he narrated how he had told a visibly upset troupe to imagine she was in the chair where she always sat. Then, in a sudden emotional outburst, he cried, “I couldn’t save her". Moneekadi was a woman of indomitable spirit and energy. The backbone of the group, her efficiency was as remarkable as her kindness and affection. Had she been around, I suspect, Tanvir would have been greedy for more from life. And may have stayed on longer. But even as one grapples with the finality of his exit today, I know that when I remember Habibsaab, I will not instantly recall a legend. I will remember a grand old man—stylish, wry humoured, gentle, with an aura that could envelop you in generous warmth and an old world charm that would make you see they just don’t make men like that any more.

Writer, critic and documentary film-maker, Pragya Tiwari is a friend of the Tanvir family.

A full life elicits rich praise and a dissenting note

The two theatre personalities who have influenced me and my art the most are Badal Sarkar and Habib Tanvir. With Habibsaab, I was fortunate to have spent many, about 50-60, evenings. He would recite Urdu poetry in his sonorous, baritone voice. Now, when I look back, I think he knew every great Urdu poem by heart.

I first met him in a place called Sagar in Madhya Pradesh, where I was a college student. He was passing by with his travelling theatre group, performing Charandas Chor with local talent from Chhattisgarh. I was spellbound, and later forged a long relationship with him.

He was erudite, but simple enough to understand folk traditions; his sense of humour was wicked and scathing, and he had the fire in his belly to do new things. I cast him in my first film, Yeh Woh Manzil Toh Nahin, and I remember him saying at the shoot, “In the lap of luxury, actors become idiots."

Habib Tanvir’s lasting contributions to theatre include the following:

1. He ran a professional theatre company for 50 years. The Naya Theatre was established in 1959. It is not easy to run a theatre company and such dedication is hard to find.

2. He was the quintessential director of modern Indian theatre—he got together the native traditions of Nacha (Chhattisgarhi folk traditions) and fused it with a very modern understanding of Western dramaturgy.

3. As a young man he gravitated towards the Indian People’s Theatre Association in the mid-1940s, and remained committed to progressive and secular causes all his life.

4. The kind of theatrical range he showed was astonishing—from ancient Sanskrit classical texts, to epics and folk tales, to Shakespeare, Molière and Brecht, to modern Indian playwrights, to the works of Premchand.

5. He worked in several languages, and was equally comfortable in Hindi, Urdu and Chhattisgarhi.

6. He brought the region of Chhattisgarh on to the international map.

We have lost another giant; in May, Augusto Boal, the Brazilian playwright and director who was associated with the Theatre of the Oppressed, died, and now Habib Tanvir. He was very innovative in the use of the Chhattisgarhi dialect; his actors were real people, very rooted, who expressed themselves physically. It was a refreshing change from the conventional Hindi theatre which was very urbanized or Sanskritized. The kind of theatre that he did will be missed because we have no successor to him.

I saw Habib Tanvir’s Charandas Chor in the last century, and it was riveting. Through Charandas Chor, many theatre practitioners such as myself were able to lead an investigation of what culture is and what modernity is, especially in a country such as ours, wherein centuries of tradition clash with one another. Subsequently, I revisited most of his productions and, as far as I was concerned, they faltered. There was a sense of the faded-jaded about them. Plus, his political alliances in his home state were on a dubious wicket. I interacted with him on three occasions (once in Delhi, once in Bhopal, and once in Mumbai), and I was disappointed to hear his rather uninformed views and dismissive tone about people’s theatre and the working class movement in Mumbai.

There are innumerable theatre people who rate him as one of the greats. Other than the first production of Charandas Chor, I didn’t have the opportunity to experience that greatness.