The quality of budget tablets in the range of ₹ 10,000 has improved considerably in the last few years. Unfortunately, we haven’t seen a similar improvement in entry-level budget tablets priced around ₹ 5,000. Intex’s latest tablet iBuddy IN-7DD01, priced at ₹ 5,499, looks a bit different but can it change the perception about budget tablets? 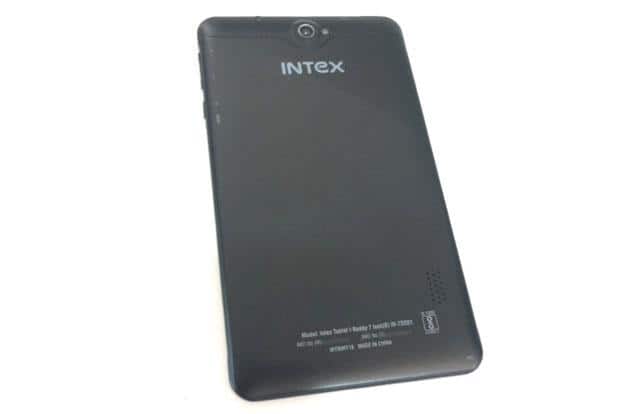 Unlike most other budget tablets, iBuddy IN-7DD01 doesn’t feel cheap or poorly built. It weighs 272g which makes it a tad lighter than an average 7-inch screen tablet. The matte finish and curved back design makes it handy when you are holding it in one hand for making a call, watching movies or reading.

Though the look and feel is impressive, the tablet is not very solidly built. A slight pressure on the back panel and you can see ripples on the home screen.

The two SIM card and microSD slots are placed under a removable plastic strip around the camera. The micro USB port and the 3.5mm audio jack are also placed at the top. The volume rocker and the power button are big and placed on the side panel. Interestingly, Intex has added and highlighted a reset slot. It is placed next to the power button and can be useful when the tablet hangs. The 7-inch display has a resolution of 1024x600p, which is what most tablets in this price point offer. For the screen size, the resolution is pretty low and it reflects during movie playback and gaming. The display looks a bit pale, which makes it ideal for casual use such as reading and web browsing. The wide viewing angles are poor. Even the slightest of tilts can render the on-screen content illegible from odd angles. The display also reflects a lot and catches a lot of smudges too. Though the display allows users to enhance colours by switching to a vivid mode, we didn’t notice any major improvement in quality.

Powered by a MediaTek MT8321 quad-core processor with 1GB RAM, the tablet feels a bit sluggish while switching between apps, especially when we had more than 5-6 apps open in the background. However, it can handle individual tasks such as web browsing, reading and YouTube videos well. It played games like Smash Hit smoothly.

The tablet has only 8GB of internal storage but you can add another 32GB via micro SD card. The tablet’s key high point is the dual SIM slots which support 3G networks and calling. It can actually be used as a smartphone if you want a big screen.

The 2,800mAh battery can last a whole day on a single charge on modest use.

Software: Clean UI is easy to use

The iBuddy IN-7DD01 runs Android 5.1 (Marshmallow) out of the box, with a plain Android user interface (UI). It is a clean looking UI and is a lot easy to figure out compared to custom UIs that a lot of smartphones and tablets tend to have these days. There are no pre-loaded third-party apps, which means less clutter and more free space to download the apps you want. You can use the tablet in both the portrait and landscape modes with ease.

Intex IN-7DD01 is really just another affordable Android tablet, with no real outstanding features. At this price, it is still not a bad bet, considering its good design, clean UI and ability to handle most tasks well. If you are looking for a tablet with a better screen, you will have to splash a bit more cash for the Micromax Canvas Tab P680 ( ₹ 7,241) as it offers superior display (8-inch, 1280x800p), more storage (16GB with 64GB via micro SD card), 3G calling as well as better build quality and long-lasting battery (4,000mAh).