Thanks for Visiting Mint
You seem to have an Ad Blocker on. Please turn it off in order to continue, or whitelist Mint
HOW TO TURN OFF AD BLOCKER
OR
REFRESH IF YOU ALREADY TURNED OFF THE AD BLOCKER
Home >Leisure >The bad-boy gentleman

The enduring image I have of Feroz Khan is that of a 62-year-old going on 25. On an assignment for GQ magazine, UK, a couple of years ago, I was producing a shoot with Bollywood men. Khan’s bald, brash, bad-boy persona worked as the picture of cool. It was my first meeting with him, at his opulent Juhu home, FK House. As I waited in the foyer to be ushered in to meet him, I glanced into the adjacent room and was taken aback to see the actor casually walking around in his bedroom in nothing but a G-string, a glass of champagne in hand, preparing to try on the assigned outfit. It was 10 in the morning, and by the time the shoot packed up at 1pm, he had emptied the bottle. 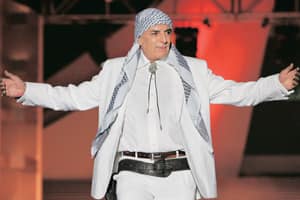 Out of the box: Flamboyance on and off screen was Feroz Khan’s signature style. Vijayanan Gupta / Hindustan Times

But then this was the Feroz Khan of Dharmatma, Qurbani and Janbaaz.

In a career spanning over 40 years, Khan did remarkably few films. Ironical, considering the man was never known for economy in his style of film-making. The reason perhaps is that Khan never fitted into a slot—he could not be the romantic hero in the Rajesh Khanna mould, he did not have Shatrughan Sinha’s rough-around-the-edges quality, his unquestionable charm could not match Vinod Khanna’s rugged good looks, nor did he pack a punch like Amitabh Bachchan.

In fact, Khan almost did not belong to that generation of the industry. His ideas and style, heavily Western-inspired, drove him to switch from acting to production and direction, perhaps because the 1960s and 1970s were not ready for someone like him. He chose to build his Utopia in his childhood town of Bangalore, away from the centre of Bollywood. He invested in horses instead of the box office; played the good guy with unintended shades of grey in an era of chocolate-boy heroes; he destroyed Mercedes cars when most would have given an arm and a leg just to sit in one. In his films, as in life, Khan was the playboy who lived life in the fast lane.

What he lacked in on-screen impact he made up for off screen, by becoming a style icon. Even as he aged, his bald pate became a style statement. The cowboy boots and leather jackets remained. His love for motorbikes was complemented by his look—shirts unbuttoned till the last, medallions nestled in chest hair, his characteristic raspy drawl, with a curious American twang, unmistakable.

He won the Filmfare Award for best supporting actor for his role of Jai Kishan or JK in Yash Chopra’s Aadmi Aur Insaan (1969).

Khan made his debut as a producer-director in 1972 with Apradh and got his first taste of success with Dharmatma (1975). His success peaked with Qurbani (1980), the film he will always be remembered for. The racy thriller was stylistically ahead of its time and celebrated disco with the voice of Nazia Hassan and the sensual Zeenat Aman swaying to Aap jaisa koi. The sight of the beauty queen in a bikini or hosing herself in a white chiffon sari set pulses racing, including those of co-actor Vinod Khanna. But what drew gasps of shock from the audience was the calculated decimation of a Mercedes Benz in an underground parking lot. Khan would not have done that to an Ambassador; that was for the Manmohan Desais of the world.

His portrayal of women was stereotypical. But though not strong characters, they were always pivotal to the plot. Seductresses who swayed to the charms of the leading man, usually Khan himself, he lensed them with care. Whether it was Zeenat Aman in Qurbani or Dimple Kapadia in Janbaaz (1986), they oozed sensuality while mouthing anglicized Hindi dialogues. They were bold, brazen and unconventional— much like Khan. The coy, suggestive image of bees buzzing over flowers was not for him. His women quivered on haystacks in extended love-making scenes, as in Janbaaz, or lip-locked passionately, like in Dayavan (though Madhuri Dixit’s discomfort was obvious). All his leading ladies swear as much by Khan’s charm as by his ability to make them look better than ever. The ultimate cowboy of Bollywood, he paid homage to Godfather with his Dharmatma and attempted Nayakan with Dayavan (1988).

His film career nosedived after Qurbani but that did not take the flashy glamour out of Khan. He could almost be described as the John Travolta from Saturday Night Fever in terms of sex appeal and style, but minus Travolta’s dancing talent. In the 2000s, his only performances were in home productions Janasheen and Ek Khiladi Ek Haseena and, finally, in the 2007 hit Welcome.

On 27 April, he died after a prolonged battle with cancer in the peaceful surroundings of his Bangalore farmhouse, close to his favourite animals and comforted by close family.

Whether his plans of remaking Qurbani with son Fardeen Khan (called Kurbani) will be realized remains uncertain, but what is certain is that few film-makers will venture to do a Qurbani. Not many have Khan’s panache; almost none would have the recklessness to smash a Porsche in the basement of a car park.